Accessibility links
Autonomy Of Terrorism Unit May Explain Why FBI Missed Anti-Muslim Bias A counterterrorism training session at the FBI training center in Quantico, Va., taught agents that Islam was a violent religion and erroneously linked religiosity to terrorism. Officials close to the process say part of the problem is that the counterterrorism training division has a lot of autonomy. 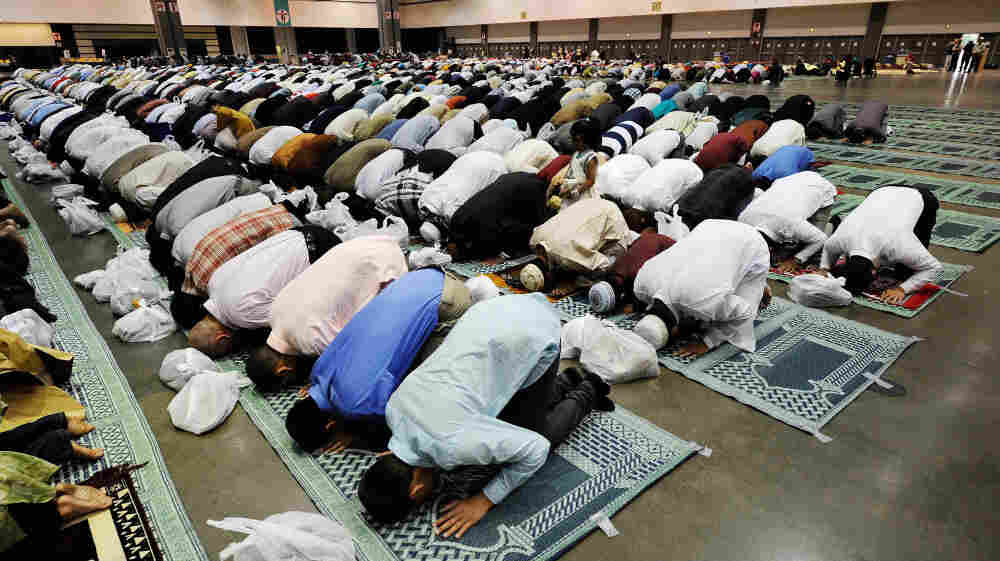 Muslims pray during the holiday of Eid ul-Fitr at the Los Angeles Convention Center on August 30. Some FBI agents complained that a recent training course on counterterrorism seemed biased against Muslims. Kevork Djansezian/Getty Images hide caption

The first inkling that something was amiss in the counterterrorism training given to local and federal law enforcement came in March. That's when NPR reported on the cottage industry of independent counterterrorism trainers who signed up to teach local and federal law enforcement officials about terrorism. The report warned that the instructors were not being properly vetted and some were presenting skewed views about Muslim-Americans and their potential links to terrorism.

Then, last month, Wired magazine reported on a counterterrorism training session at the FBI training center in Quantico, Va., that was led by an FBI employee. The slides of the PowerPoint presentation obtained by Wired magazine made clear that the instructor was teaching agents not only that Islam was a violent religion, but also was erroneously linking religiosity to terrorism. He said the more religious a Muslim in this country was, the more he should be seen as a potential suspect.

NPR has obtained real-time emails from agents who were attending that controversial class at Quantico this April. What the emails indicate is that at least some of those in that class objected to the biased information they were getting and they reached out both to experts and to supervisors to complain about the curriculum.

One email said that the Prophet Muhammad was being portrayed as a warring military leader. It also cited an instructor as saying that a "true Muslim" had to support or take part in the killing of non-Muslims. The instructor also told the class, according to a handful of attendees, that Muhammad was an epileptic and the Quran didn't come to him in a series of heavenly visions, but instead was actually part of an epileptic fit.

It is unclear how the agents in the class actually registered their complaints to the FBI brass - whether it was face-to-face discussion or in emails to their supervisors. But officials confirm that they heard about the class last April and made moves to remedy the situation. There were multiple meetings last spring in which the complaints were addressed, one official said. And the instructor of that class was removed from the training program.

The question that everyone is asking — and the FBI is trying to answer now — is how the Muslim bias crept into the training program in the first place.

About two months before the class started, FBI officials tell NPR, the bureau had already started a review of all its training programs – from interrogations to Tasers. They were looking for places to economize ahead of what they expected to be brutal cuts to the FBI budget. The counterterrorism training was, the officials said, given a low priority because the FBI didn't expect funding for that kind of training to get slashed. What isn't clear is whether the urgency to take a look at the program changed after the agents lodged complaints about the April class at Quantico.

NPR has learned the FBI did two things to at least stem the damage the training controversy has wrought. Just last week, the bureau sent out an email requesting that all training materials that related to religion and culture be sent to headquarters and essentially taken offline until they could be vetted. Officials plan to go through each and every training module and look for instances of bias or inaccuracies that, until now, might have slipped through the cracks. The FBI has also asked all 56 of its field offices to do an internal scrub of all their counterterrorism training to look for hints of possible bias. The recall suggests that the FBI is not entirely sure what it is teaching in its counterterrorism curriculum.

Officials close to the process say part of the problem is one of structure. The counterterrorism training division has a lot of autonomy. It is essentially in charge of putting together its own training module and then is supposed to find a way to fit that training into the broader curriculum for agents at Quantico. Because of the way it is structured, the vetting process for the counterterrorism curriculum was minimal. While the FBI has ordered an internal audit to look at how this happened, officials said they believe this could be the crux of the problem.