Accessibility links
The Nation: Why The U.N. Troops Should Leave Haiti Amid mass protests against U.N. occupation, Haiti is still having a hard time convincing the world that it's ready for self-governance. The Nation's Greg Grandin and Keane Bhatt explain why U.N. soldiers should leave Haiti.

The Nation: Why The U.N. Troops Should Leave Haiti

The Nation: Why The U.N. Troops Should Leave Haiti 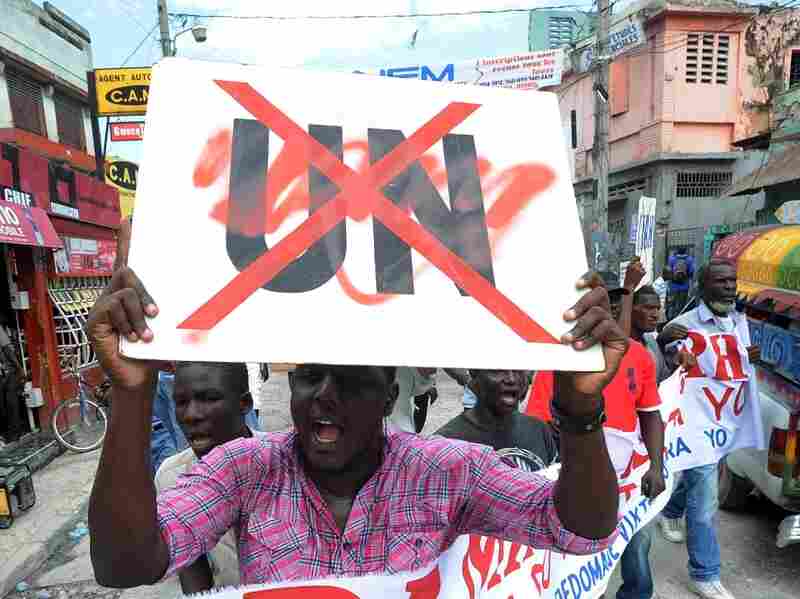 Haitians demonstrate on Sept. 23, 2011 in Port-au-Prince against the UN mission in Haiti (MINUSTAH.) They protested against the alleged sexual assault of an 18-year-old man in Port-Salut by Uruguayan Peacekeepers. Haitians also blame UN Peacekeepers of a cholera outbreak that began in 2010. Thony Belizaire/AFP/Getty Images hide caption

Read More Opinions About The U.N. And Haiti

Greg Grandin teaches history at New York University and is the author of Fordlandia. Keane Bhatt a former Peace Corps volunteer in the Dominican Republic, is an activist and musician in New York.

An explosive cell phone video released earlier this month documents the alleged sexual assault of an 18-year-old Haitian man at the hands of five Uruguayan troops belonging to a contingent of the United Nations Stabilization Mission in Haiti located in the southern town of Port-Salut. As the story spreads internationally, MINUSTAH—the UN Stabilization Mission is known by its French acronym—has become the target of demonstrations in Port-Salut, in the Haitian capital Port-au-Prince and in front of the Uruguayan Ministry of Defense in Montevideo. Defense Minister Eleuterio Fernández Huidobro ordered the immediate repatriation of the soldiers shown in the video, who now await further legal action in jail.

Earlier, as unconfirmed reports of misconduct began to multiply, Defense Minister Huidobro stated that "among such a large number of people, there will always be someone who behaves wrongly." Two weeks after the cell phone video was released, MINUSTAH chief Mariano Fernández argued that "acts of a few should not also tarnish [the image] of thousands of military, police, and civilian personal serving MINUSTAH and Haiti impeccably since 2004."

However, this is not a case of a few bad apples. MINUSTAH has had a consistently disastrous record of malfeasance in its seven-year military presence—much of it the result of institutional design. Although Brazilian Defense Minister Celso Amorim—charged with the largest contingent of UN soldiers in Haiti—recently discussed a gradual reduction in troops, he also admitted that no timetable has been drawn up for their eventual withdrawal.

Here are ten reasons why a timetable for a speedy withdrawal of all UN soldiers from Haiti is necessary:

1. Haiti has not experienced an armed conflict, nor has it been a party to an enforceable peace agreement, the criteria for legitimately stationing UN peacekeeping troops. The UN states in its charter that it shall not "intervene in matters which are essentially within the domestic jurisdiction of any state," unless they present a threat to peace, breach of the peace or act of aggression. MINUSTAH arrived in Haiti using this justification, which has also allowed it to remain without the consent of the Haitian government. It would now be difficult to reasonably invoke this claim, seven years after MINUSTAH's arrival and seemingly indefinite presence.

2. UN troops are granted broad immunity for crimes committed in Haiti, and are subject to prosecution only in their home countries. Among the different governments participating in MINUSTAH, there are major discrepancies between their domestic laws and their willingness to investigate crimes. Even if prosecutions of peacekeeping troops do take place, it would be difficult to obtain witnesses and dependable evidence from Haiti. Haitians themselves rarely hear about successful punishment abroad, heightening the perception of impunity. As long as this legal structure that fosters a lack of accountability persists, a full withdrawal is the only definite way to prevent future abuse.

3. Just four years ago, over 100 Sri Lankan MINUSTAH troops—more than 10 percent of the entire brigade—were repatriated to their home country due to allegations of sexual misconduct and abuse, involving underage girls. The UN's investigative arm found that "in exchange for sex, the children received small amounts of money, food, and sometimes mobile phones." Acts of sexual exploitation and abuse were frequent occurrences at "virtually every location where the contingent personnel were deployed." There is no evidence Sri Lankan troops were ever prosecuted. Recent news reports corroborate fresh allegations that Uruguayan soldiers impregnated local women in Port-Salut, including a 17-year-old girl.

4. MINUSTAH is implicated in last year's suspicious "suicide" of a Haitian teenager named Gérard Jean-Gilles, who was found hanging inside a UN base in Cap Haitien. Haiti Liberté reported that former head of MINUSTAH Edmond Mulet obstructed an investigation carried out by Haitian authorities, invoking immunity to prevent the Haitian judiciary from summonsing a Haitian witness in the case.

5. UN peacekeeping troops from Nepal were responsible for introducing cholera into Haiti in late 2010, most likely by contaminating rivers with improperly treated human waste. Cholera proceeded to kill more than 6,200 and infect 440,000 Haitians in just ten months. New scientific research shows that MINUSTAH's gross negligence most likely caused the lethal epidemic, but directly after cholera's appearance, Edmond Mulet refused to admit the possibility of UN culpability. Despite public appeals by leading cholera and health experts, the United Nations, World Health Organization and Center for Disease Control and Prevention claimed that an investigation into how the disease arrived in Haiti was not necessary, and could be harmful.

MINUSTAH's denials further enraged Haitians, whose dramatic anti-UN demonstrations led to protesters being shot dead by UN troops. Despite this history, the Uruguayan contingent in Port-Salut is still accused of improperly disposing trash and waste water.

Epidemiologist Renaud Piarroux, who researched cholera's transmission in Haiti, concluded last month that because there's no reasonable doubt the UN brought the pathogen into the country, the UN "should accept responsibility and make amends to Haiti...for instance, by offering financial compensation or by supporting an all-out effort to make the country cholera-free again."

Read more at The Nation.