Accessibility links
Brewers And Beer Lovers Tap Into Craft Beer Craze Sales of craft beer have risen 15 percent this year, while sales of mass-produced beers have dipped. Innovation within the industry is exciting for aficionados — many of whom will attend this weekend's Great American Beer Festival, considered the premier venue for new breweries to get noticed. 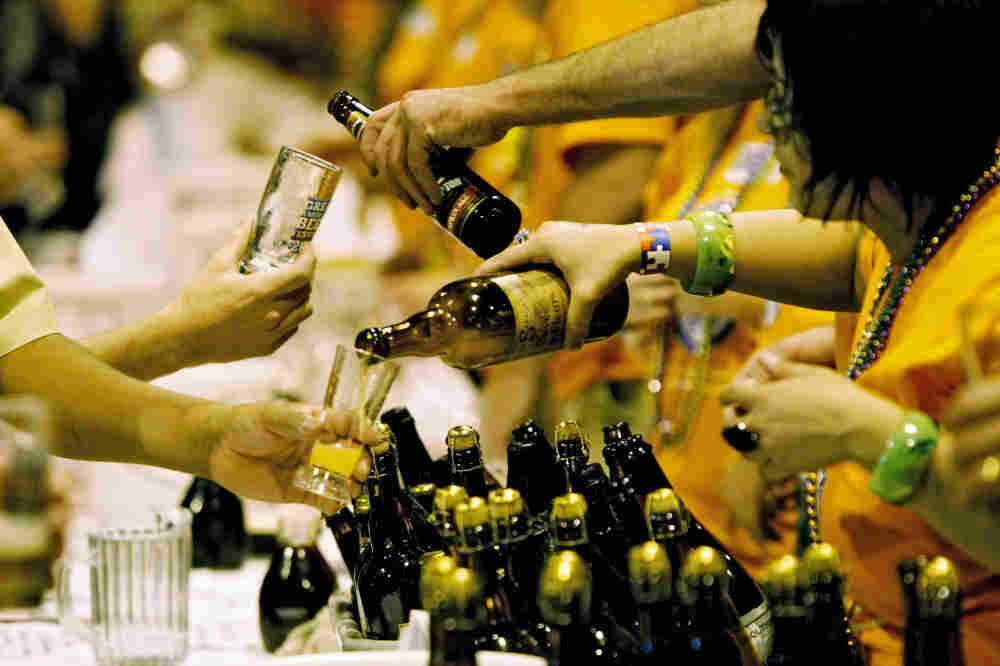 Vendors pour beer at the 2010 Great American Beer Festival in Denver. More than 400 breweries are expected to attend this year's festival, which sold out its 40,000 tickets in just a few days. Ed Andrieski/AP hide caption

The event's 40,000 public tickets sold out in just a few days — an indication of how well this growing industry is doing even in a poor economy.

Nearly 150 small craft breweries have opened their doors in the U.S. this year, including Pateros Creek Brewing Co. in the craft beer mecca of Fort Collins, Colo.

A craft brewery produces up to 6 million barrels of beer per year.

The brewery's owner and head brewer, Steve Jones, mashes up grains there in a small mill for a fresh batch of ale. Jones, along with his father and his wife, opened up this tiny brewery and adjoining taproom just three months ago. They're the only employees, not counting the volunteers.

All of them will be manning the taps at the brewery while Jones spends the weekend at Denver's festival. Even though his fledgling business has only been open for three months, he didn't think twice about forking over $600 to enter his beers into the competition.

"The crazy thing is, this is one of those industries, at least right now, that people are accepting as, 'Hey, you know, I will spend my extra dollar here, versus ... somewhere else,' " Jones says.

Indeed, sales of craft beer have risen by 15 percent just this year, while sales of large, mass-produced beers like Coors and Budweiser have dipped. Paul Gatza, director of the Brewers Association trade group that puts on the beer festival, says many states have made it easier for small breweries to open up.

"It doesn't cost much to get licensed," Gatza says. "What it takes is skill and expertise at the brewing process. But right now craft beers are very popular, and it's a pretty good environment for a new brewery to open."

The 'Napa Valley Of The Brewing Industry'

More than 400 breweries young and old are coming to the Great American Beer Festival. It's considered the premier venue for new breweries to get noticed and distinguish themselves in a market that's getting more and more crowded.

This is one of those industries, at least right now, that people are accepting as, 'Hey, you know, I will spend my extra dollar here, versus ... somewhere else.'

All the innovation going on within the craft beer industry is exciting for aficionados like Paul Bestafka. At the new Renegade Brewery in Denver, he tasted beers like a Mexican amber spiced with poblano peppers.

"Frankly, we're here in the mecca, we're in the Napa Valley of the brewing industry here in Denver, Colo.," Bestafka says. "It's following the same lines of the culinary movement that the United States has followed over the past 10 to 15 years, and the future's really bright for craft brewing, thank God."

Brian O'Connell is Renegade Brewery's co-owner, brewmaster, business manager, bartender and nearly everything else you can think of. He quit his job as a statistician because he wanted to turn his love of home brewing into a career.

Like Pateros Creek Brewing, Renegade has only been open for three months, but sales have been strong, says O'Connell, led by the early customer favorite: a rye India pale ale. It's one of five beers he'll enter in the competition.

"Our brewery is five blocks from the festival, so we can stand at our booth and say, 'Hey, go check out the brewery, you can walk there from here,' " O'Connell says.

And even if he doesn't win, O'Connell figures just being at the event will lead to a further boost in business.