Accessibility links
In 5 Minutes, House Votes To Stay Funded A few members voted Thursday in five minutes and two seconds to keep the government funded for four days — or until their colleagues return next week. Astonishing, considering it took the entire months of June and July for Congress to decide to continue paying bills it had already incurred. 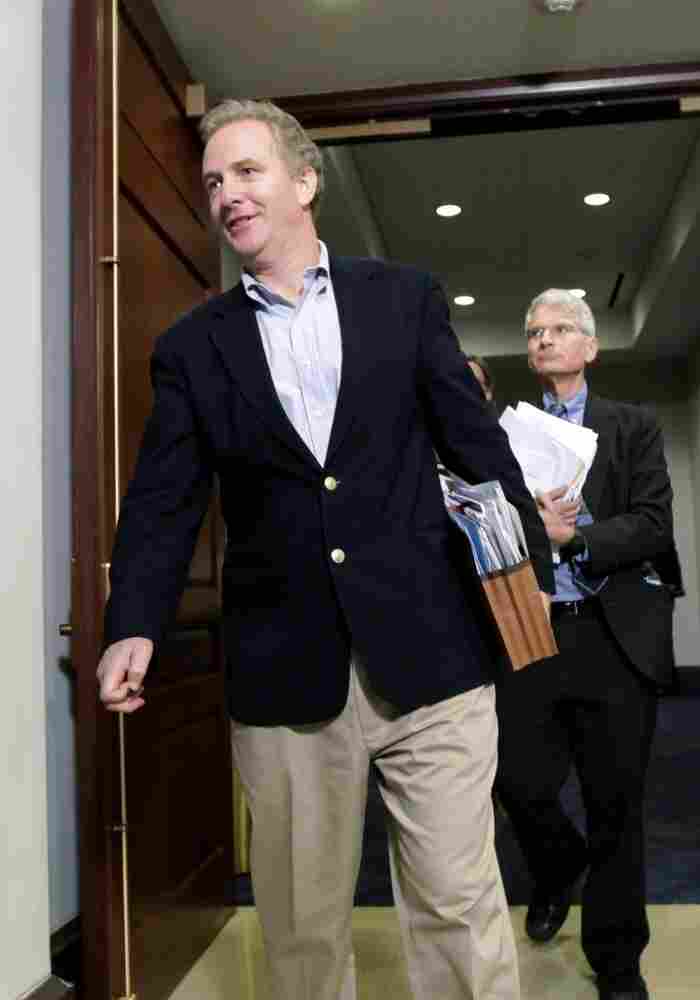 Rep. Chris Van Hollen (D-MD), pictured here on Tuesday, was one of a few House members present Thursday to vote to keep the government funded till next week. "Once you get to yes, things can move quickly," he says. J. Scott Applewhite/AP hide caption

The House or Representatives met for exactly 5 minutes and 2 seconds Thursday and — in less time than you can eat lunch — passed a spending bill that will keep the government up and running.

That is, for a few days, anyway.

At 11 a.m., an officer of the sergeant at arms threw open the doors of the House of Representatives to carry in the 4-foot ceremonial mace with the golden eagle on top.

Rep. Andy Harris (R-MD) was in the chair and called on the House chaplain to give the prayer.

The Rev. Patrick Conroy prayed for lawmakers to find new understanding this week: "May they, and may we all be concerned not only with our personal interests, but with the needs of those who live each day without power and without influence."

Next up, Texas Republican John Culberson called on the House to turn toward the flag to recite the Pledge of Allegiance.

And then Harris in the chair and Culberson at the facing desk got down to business: the money to keep the government up and running.

"For what purpose does the gentleman from Texas seek recognition?" Harris said.

None of the three lawmakers in the room objected.

"Without objection, the Senate amendments are concurred in, and the motion to reconsider is laid on the table," Harris said.

In other words, it passed. As all business was dispensed with, the House adjourned — after 5 minutes and 2 seconds — till Monday. Astonishing, considering it took the entire months of June and July for the Congress to decide to continue paying bills it had already incurred.

"Well, once you get to yes, things can move quickly," says Maryland Democrat Chris Van Hollen. "But getting to yes took way too long in this case."

The Debate Over Funding FEMA

Last week, when all of Congress was in town, lawmakers couldn't agree on how much to give the Federal Emergency Management Agency. There have been a lot of disasters this year, and it needs more money. Some House Republicans wanted to cut money from an electric-car program to pay for the increase in funds, and that made Democrats livid. Disaster aid isn't usually offset by cuts in other programs.

Both Sides Claim Vindication After Shutdown Is Averted Sept. 27, 2011

There could have been a hitch Thursday if any of those Republicans who objected to the spending had shown up. But Harris said Speaker John Boehner tamped that down early.

"We had a conference call last week within the Republican conference, and the speaker communicated with the conference and there were no objections as you saw today on the floor," Harris said.

But it was really FEMA itself that came to the rescue. It announced late last week that it could scrape along until next week without more money. That cleared the dark political clouds and allowed for Thursday's glide path to keeping the government open — for four days.

The bill only keeps things running just long enough for lawmakers to take their week off. And it was no big deal, really, said Harris. He was going to have to come in anyway, to lead a quick, temporary session.

The House and Senate don't formally recess anymore, because if they were to, that would give the president an opening to appoint an executive branch official without a vote in the Senate. Instead, the House has a quick, do-nothing session every three days.