Accessibility links
Law Doesn't Mark End Of Ala. Immigration Battle The toughest-in-the nation measure went into effect Thursday, one day after a federal judge held up key provisions. But opponents and supporters expect the legal fight to continue. 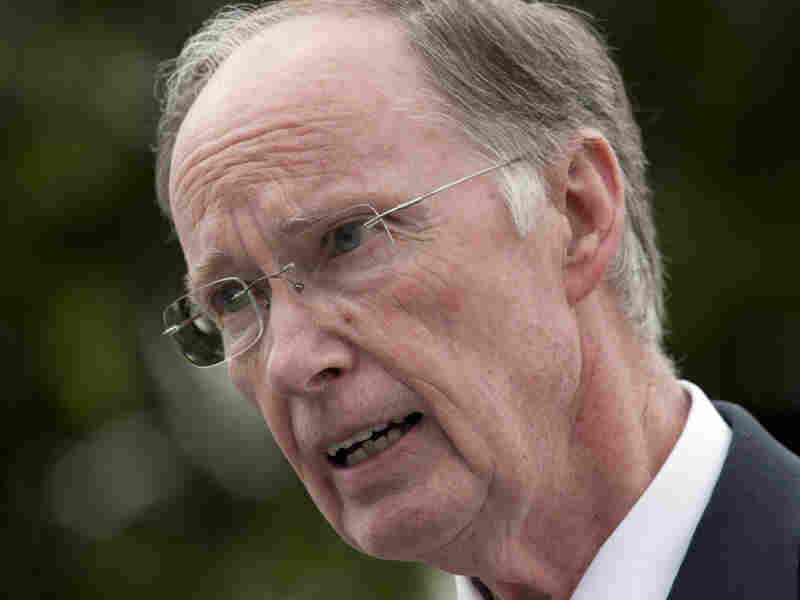 Gov. Robert Bentley talks with reporters outside the Capitol in Montgomery, Ala., on Wednesday. Bentley said he will work with the state attorney general to appeal the parts of the decision that struck down sections of the state's illegal immigrant law. Dave Martin/AP hide caption 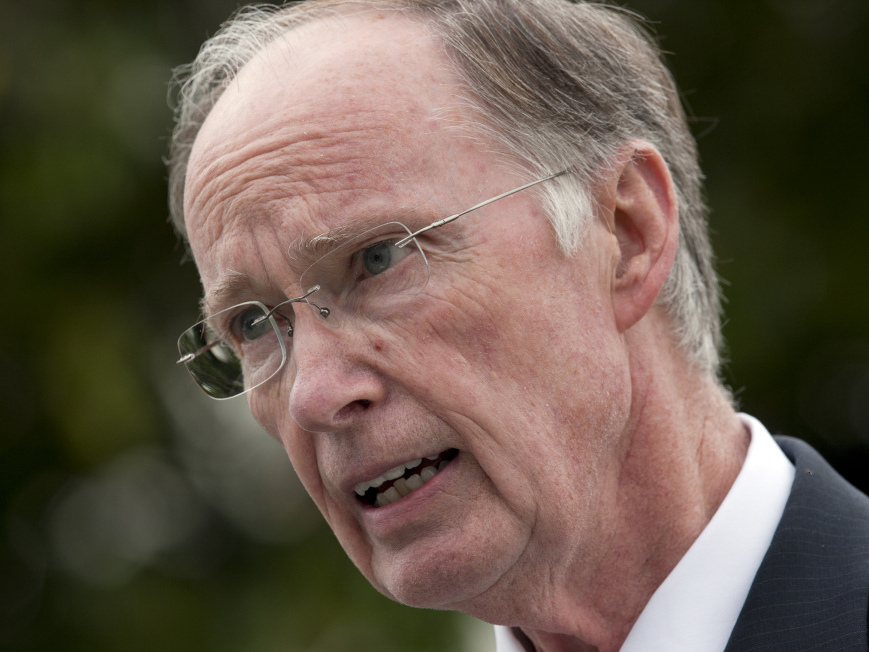 Gov. Robert Bentley talks with reporters outside the Capitol in Montgomery, Ala., on Wednesday. Bentley said he will work with the state attorney general to appeal the parts of the decision that struck down sections of the state's illegal immigrant law.

Alabama's toughest-in-the-nation law on illegal immigration went into effect Thursday, a day after a federal judge upheld some of its key provisions, but the court battle over the issue appears far from over.

State law enforcement can now question and detain without bond people they suspect may be in the country illegally, and public schools are required to verify students' immigration status.

U.S. District Judge Sharon Blackburn on Wednesday upheld those and other key aspects of the law. The Justice Department, civil rights groups and some Alabama churches had sued to stop the measure from taking effect.

"With those parts that were upheld, we have the strongest law in the country," Gov. Robert Bentley said after the ruling. "We intend to enforce it."

A number of civil rights groups already have filed a motion asking Blackburn to temporarily block the law while her ruling is brought before the 11th U.S. Circuit Court of Appeals. In Huntsville, police Chief Mark Hudson said the new legislation is "just not clear" and that his department would hold off on enforcing it at least until the city's attorney had a chance to pore over the decision.

Hudson told The Huntsville Times on Wednesday that it would "take some lawyers and probably the [state] Attorney General's Office" to sort out the provisions.

How the law will affect people and businesses in Alabama was far from clear Thursday.

The American Civil Liberties Union said the law amounted to a dragnet that would end up also catching those in the country legally simply because of their skin color or ethnic origin.

The requirement that employers demand documentation from anyone they suspect of working illegally is likely to result in "systematic racial profiling of anyone who looks or sounds foreign," said Allison Neal, the legal director of the ACLU of Alabama.

The judge let stand one of the law's more controversial provisions requiring public schools to determine whether a student enrolling in public school was born outside the U.S.

Neal told NPR her organization has "a very real concern that children are going to be taken out of school" as a result of the law.

Jose Perez, a 15-year-old high school sophomore who said he has lived in Alabama since he was 2, said the law is unfair.

"I know nothing of my home country of Mexico," he told Alabama Public Radio. "It makes me feel hurt and offended, because my parents brought me here for a better life and I didn't have a say in that. I just have a say to stay here and fighting for what I believe."

Blackburn did block several sections of the new law, including parts that barred illegal immigrants from seeking work or enrolling in public colleges. She also stopped the state from making it a crime to harbor, transport or shield undocumented residents — the provision that some churches had challenged.

The Rev. Will Willimon, who leads the north Alabama conference of the United Methodist Church, said he was satisfied that the ruling "protects our churches and their ministries from prosecution under this overreaching and severe law."

Some farmers feared the law could cost them money this autumn by keeping away workers who are vital to harvesting crops statewide.

"There are some sweet potato farmers in this state it's really going to hurt. I don't know how they're going to get their crops out," said Jeremy Calvert, a farmer in rural Bremen.

Anti-illegal immigration groups welcomed Alabama's law but said they expect the legislation to ultimately wind up before the U.S. Supreme Court.

Dan Stein, president of the Federation for American Immigration Reform, said in a statement that the law "provides welcome relief" for the residents of Alabama and that "other states, burdened by the cost and impact of illegal immigration, don't have to sit idle while the Obama administration continues to ignore their problem."

The Washington-based Immigration Reform Law Institute called the ruling "a major doctrinal breakthrough" that acknowledges right of the states to pre-empt the federal government on immigration law.

"All of this is just one more cranking up to bring this issue to the Supreme Court," said Michael Hethmon, the group's general counsel.

Immigration became a hot issue in Alabama over the past decade as the state's Hispanic population grew by 145 percent to about 185,600. While the group still represents only about 4 percent of the population, some counties in north Alabama have large Spanish-speaking communities and schools where most of the students are Hispanic.

When Republicans took over the statehouse in Montgomery last year, cracking down on illegal immigration was a key campaign promise.

He said Alabama's law is meant partly to prod Washington to take action on illegal immigration.

With reporting from NPR's Debbie Elliot and Ryan Vasquez from Alabama Public Radio. Material from The Associated Press was used in this story.