Accessibility links
For Grown-Ups, Missing Those Back-To-School Blues Is it possible to play hooky from real life and return to the magical wonder of learning in a classroom? Writer Ben Dolnick investigates the intellectual doldrums that plague life after graduation. 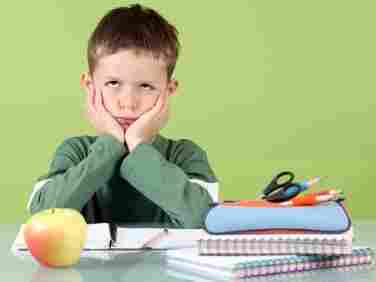 While adults wax poetic about the merits of education, kids know the agony of being stuck in a classroom. iStockphoto.com hide caption

Ben Dolnick is a writer based in Brooklyn.

Lately my neighborhood has been colonized by a species that exists only for a few weeks each fall: excited students. They're brimming with gossip about each other and opinions about subjects they hadn't heard of two months ago. They seem thrilled, even at 8 in the morning.

When I was their age, I loathed school, even in September. It was dull, and worse — it was forced upon me. I longed for escape like a prisoner crossing off days on his cell wall.

Which is why I've been surprised at the gush of envy I feel for these high-schoolers. It's not their youth. It is, oddly enough, the very thing that once tormented me: that they have almost no choice in what to study.

I used to fantasize about life after graduation, how free I'd be to read anything I wanted. If I didn't care about the feudal structure of 14th century Japan (and my god did I not care) then I'd never have to give it another thought. Instead I'd lavish attention on my handful of pet subjects, and the garden of my mind would blossom as never before.

But here's the thing: My plan worked too well. My interests changed, but my dream of being free to explore them came much truer than I could have imagined. My RSS reader tells me there are 24 unread items pertaining to my political obsession of the moment; Amazon thinks I'll like these dozen books of Canadian short stories; Twitter wonders if I've read the new essay by beloved author X.

Ben Dolnick is the author of You Know Who You Are and Zoology. Bryan Sykora hide caption

There's a Monty Python sketch in which a TV anchor delivers "The News for Parrots." There was an accident today, I think the anchor says, but, mercifully, no parrots were involved. The first time I saw it, the sketch seemed like a brilliantly absurd joke about narcissism. Now it seems like a reasonable description of my daily media diet.

I know — the problem is not in our browsers but in ourselves. The internet is, besides being a brilliant feeder of obsessions, a remarkable means of encountering new ideas. But, at least for me, new ideas have a way of getting shoved aside by the flood of slightly reshuffled old ones. Yes, I could be watching a lecture on the physics of ballet, but what about these hundred Andrew Sullivan posts?

Settling into a seat, having never heard of utilitarianism or e.e. cummings or the potato famine, then standing up 45 minutes later with your mind like a burst popcorn kernel: This is an experience hard for an adult to come by.

So, later in the year, when I see young people whose clothes and excitement have faded, I'll temper my pity with a sober reminder. While I'm home reading what I think I like, they'll be learning about the life cycle of a fern, whether they like it or not.