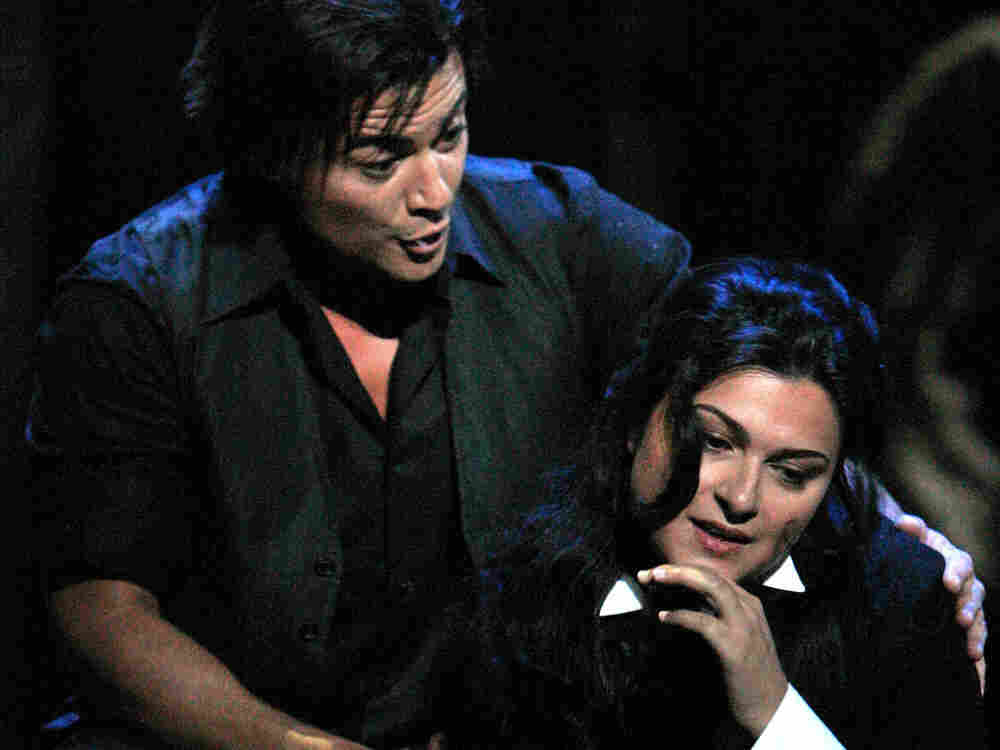 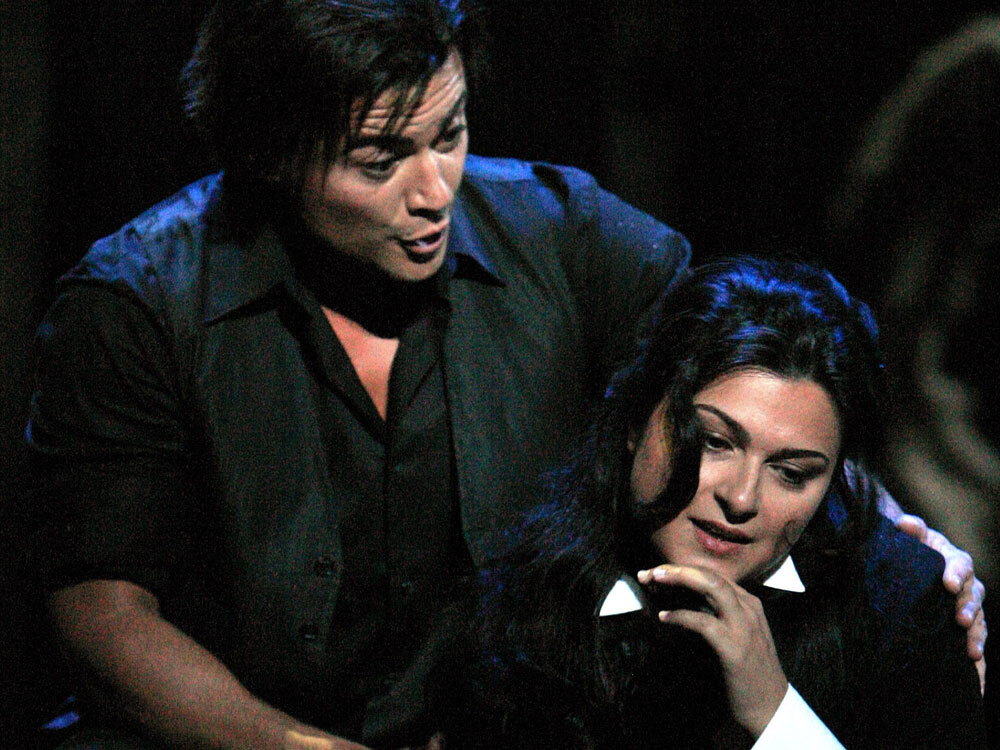 In the first act, Rodolfo meets Mimi for the first time, and responds with his tender aria, "Che gelida manina" — "Your little hand is cold," in this recording by Luciano Pavarotti.

Also in Act One, Mimi responds to Rodolfo's curiosity by introducing herself, in the aria "Mi chiamano Mimi" — "My name is Mimi," in this recording by Mirella Freni.

We all know the old saying about opera — "the opera's not over 'til ..." But Placido Domingo, the Washington National Opera's General Director, says that cliche doesn't apply to his company's La Boheme.

Giacomo Puccini once said that the secret to his success was putting "great sorrow in little souls" — and he did it with a formula that has fueled a spate of modern network television hits.

In recent years, TV executives have discovered they can get great ratings with programs that don't require expensive stars, writers and highly developed stories. Instead, the phenomenon of reality TV gives us everyday people interacting in unscripted, real life situations — or at least as real as they can be with cameras recording everything.

Back in the late 1800s, a group of opera composers, including Puccini, did something along the same lines, creating what might be called "reality opera." Plainly, they didn't drag everyday folks off the streets and put them in theaters to sing arias. What they did do was to change the shape of opera by introducing those "little souls" Puccini talked about.

For centuries, opera had been dominated by larger-than-life characters: kings and queens, gods and goddesses, mythic figures holding the power of life and death over ordinary people.

Over time, as opera became a more and more popular form of entertainment, things changed. Composers started writing operas about ordinary people, instead of those who ruled over them. The new style was called verismo, and Puccini was among its finest practitioners.

Puccini's operas thrive on the reality that, at some point in their lives, people everywhere — from Rome, to Paris, to Japan, to the American Wild West — all endure the same trials. They struggle with love, envy, betrayal, loss and heartbreak.

It's hard to say which of Puccini's many popular operas has been his greatest hit, but La Boheme is surely a prime candidate. It's a simple drama involving common people. But their feelings are portrayed so deeply, and so vividly, that their emotions soon become ours, and their heartbreaks seem as wrenching as our own.

On World of Opera, host Lisa Simeone brings us a performance of La Boheme from the Kennedy Center for the Performing Arts in Washington, D.C. It features a pair of dynamic young stars, soprano Adriana Damato and tenor Vittorio Grigolo, in a colorful — and racy, some might say — production by the Washington National Opera.

The Story Of 'La Boheme' 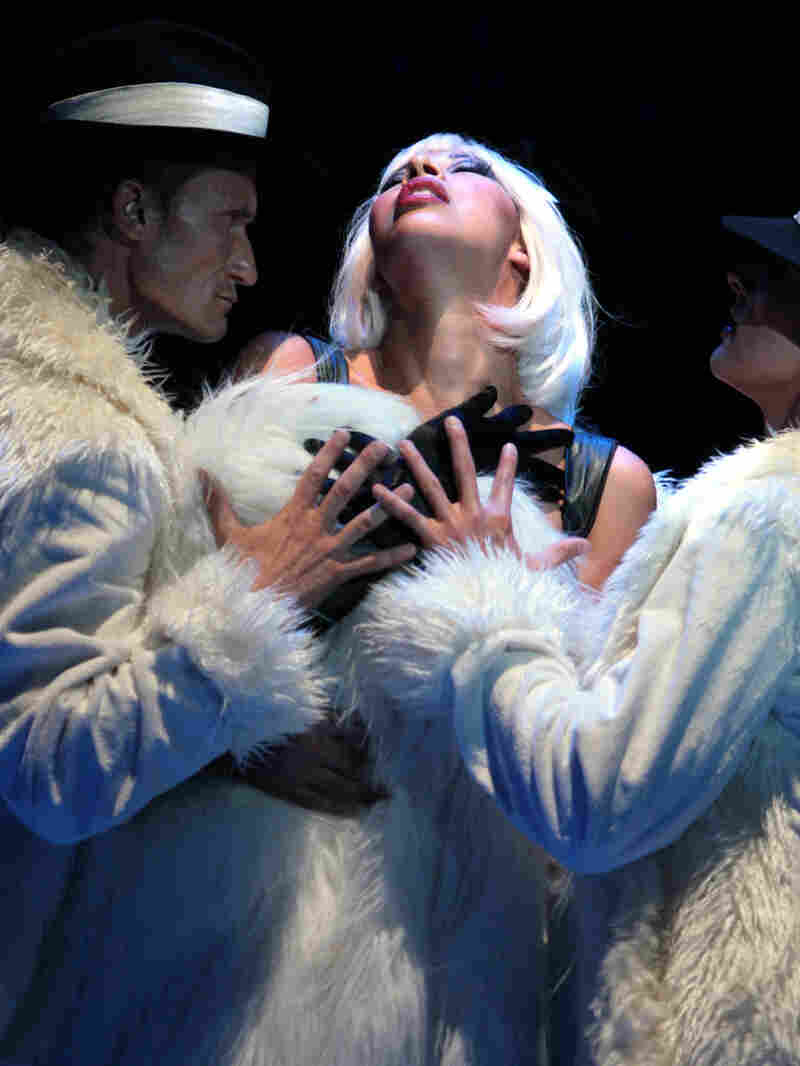 The opera's familiar story is set in the Latin Quarter of Paris. As Act 1 begins, two struggling young artists, the poet Rodolfo and a painter, Marcello, are working in their shabby, unheated apartment on Christmas Eve. They're joined by their fellow bohemians, Colline and Schaunard, a philosopher and a musician. Their landlord demands rent, but they put him off and everyone decides to go out drinking — except for Rodolfo. He'll stay home to finish his work.

When Rodolfo is alone, there's a knock at the door. It's Mimi, a young seamstress who needs her candle relighted. Rodolfo invites her in, and they get to know each other through two very famous arias. Rodolfo introduces himself, and his dreams, in the aria "Che gelida manina" (Your little hand is cold). Her introduction is the aria "Mi chiamano Mimi" (My name is Mimi.) The situation is ripe for romance, and the two are quickly drawn to each other. But soon there are shouts from the street, and they go off to join Rodolfo's friends.

In Act 2, Rodolfo and Mimi join the others at a busy cafe. We also meet Marcello's off-and-on girlfriend, Musetta. Tonight, she has a wealthy escort named Alcindoro. Still, her lively aria is clearly meant to get Marcello's attention. When Marcello responds, Musetta makes a scene, driving Alcindoro away. But when the bill comes, no one has the money to pay it. So the bohemians take off. When Alcindoro returns, looking for Musetta, he gets stuck with the tab.

Act 3 takes place outside a tavern, a roadhouse on the outskirts of Paris, during the wee hours of the morning. It's dark, and snowing.

Mimi appears, pale and stricken by a terrible, wracking cough. When Marcello comes out of the tavern, Mimi tearfully tells him that Rodolfo's jealousy is making their relationship unbearable. When Rodolfo emerges, Mimi hides in the shadows. She listens while Rodolfo explains to Marcello that he does have fits of jealousy — but they're really phony. He only does it to get away from Mimi, when he can't bear her obvious illness and suffering.

Mimi's coughing gives away her hiding place, and Marcello goes back into the tavern to be with Musetta, leaving Rodolfo and Mimi alone. They reluctantly agree to separate. But when Marcello and Musetta come out of the tavern noisily, their quarrel moves Mimi and Rodolfo to stay together. The quartet that ends the act reveals two intense, but very different relationships.

Act 4 takes place in the cold, ill-kept apartment where the opera began. Rodolfo and Marcello are working, but their minds are on their lovers. Colline and Schaunard return with some food, and the scene turns jolly.

The mood changes quickly when Musetta arrives with Mimi, who is plainly dying. Her friends try to scrape some money together to get help. Musetta takes off her earrings and gives them to Marcello, to sell for medicine and a doctor. Colline decides to part with his favorite overcoat, bidding it farewell in one of the opera's most moving arias.

When Rodolfo and Mimi are left alone, they tenderly recall their first meeting — in this same apartment. The others return, and they all try to make Mimi more comfortable. But she grows quiet, and dies, leaving Rodolfo despondent at her side.