Accessibility links
Pop Art Master Oldenburg Unveils Another Big Idea Claes Oldenburg unveils his latest outdoor sculpture — a giant paintbrush — outside the Pennsylvania Academy of the Fine Arts in Philadelphia this weekend. At first, Oldenburg's giant clothespins and spoons made him a target for ridicule. But now you can find examples of his work all over the world. And like all of his work, it's intended to provoke a response. 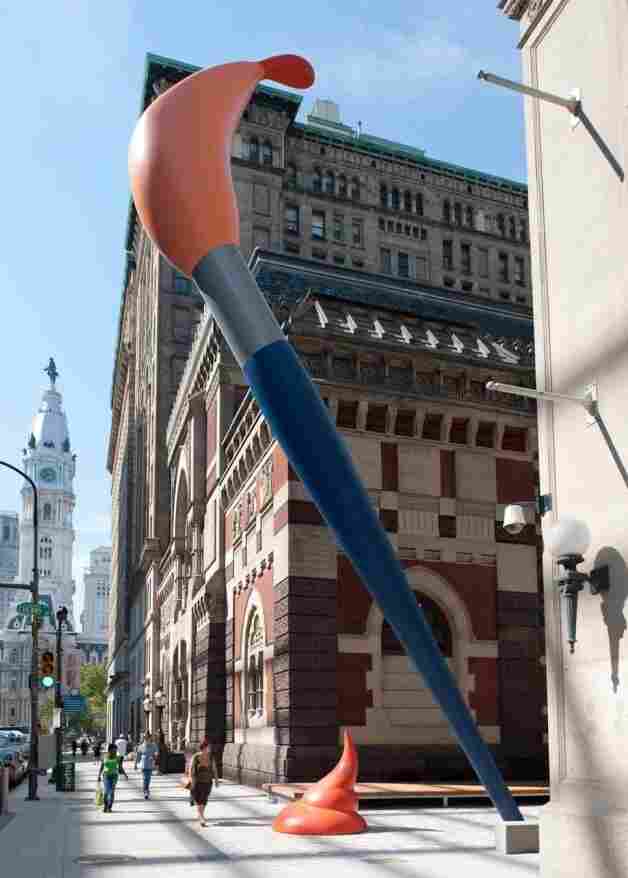 Pop art master Claes Oldenburg will officially unveil his latest sculpture outside the Pennsylvania Academy of the Fine Arts on Saturday. Oldenburg is known for taking everyday objects and blowing them up to impossible sizes. At first, his giant clothespins and spoons made him a target for ridicule. But now you can find examples of Oldenburg's work all over the world, from Cologne to Cleveland. And they've been embraced — for the most part.

In Philadelphia this summer, workmen with giant construction cranes blocked traffic for hours while they installed Oldenburg's Paint Torch, a 50-foot-tall paintbrush. The sculpture, which sticks out over the sidewalk at an angle, is visible for blocks in either direction.

In an interview in his studio in New York, the 82-year old sculptor explained that a lot of thought went into that angle. "When you have an angle like this, you put some action into the form. So what you're seeing here is the brush having been face-down dipped into a blotch of paint and is about to put that paint onto the canvas, which is the sky. So it has that movement, that gesture which is very important to the life of the sculpture," he says.

The artist has brought dozens of sculptures to life around the world — from the giant clothespin next to Philadelphia's City Hall to a giant shuttlecock in Kansas City to a giant set of binoculars in Los Angeles. Oldenburg grew up in Chicago and started out to be a journalist. But he decided he was better at drawing than writing. He moved to New York in the 1950s with the idea of making art that would matter outside of museums. He started sketching plans for colossal outdoor sculptures in the mid-1960s, when it was far from clear that they would ever be built.

"The first ones were then very astounding," says Barbara Haskell, a curator at the Whitney Museum of American Art in New York. "The idea that there was a common object ... that somehow was in a public space was unheard of at the time. It generated huge controversy and enthusiasm, in equal parts."

"It always starts that way," sighs Oldenburg. "The newspapers give a bad review. And you would hear a lot of people complaining on the radio. And then that wore off. What happened in many cases is the piece would become a symbol. ... Its approval rating would go up. And the people got fond of it. That's the status of most of them now."

Perhaps none of Oldenburg's pieces encountered as much resistance as the Free Stamp — a giant rubber stamp, the kind you might find on a bureaucrat's desk, with the word "FREE" in reverse lettering on the bottom. It was originally commissioned in 1982 by the Standard Oil Co. of Ohio for a site in front of its new skyscraper in downtown Cleveland. But then BP bought the company and stamped the project "canceled," so to speak.

"I don't think they ever came to the microphone and said, 'We hate this thing because it ridicules our company and suggests that all office work is pushing a rubber stamp on documents that go past your desk,' " says Steven Litt, the art critic for The Cleveland Plain Dealer. "But it certainly made them seem like they didn't get the humor of this piece."

Free Stamp spent three years in storage before production resumed, and it was finally installed a few blocks away from the intended site in 1991. Litt says it's never been fully embraced like, say, Oldenburg's iconic Spoonbridge and Cherry, in Minneapolis. But he says the Free Stamp still has the power to provoke. 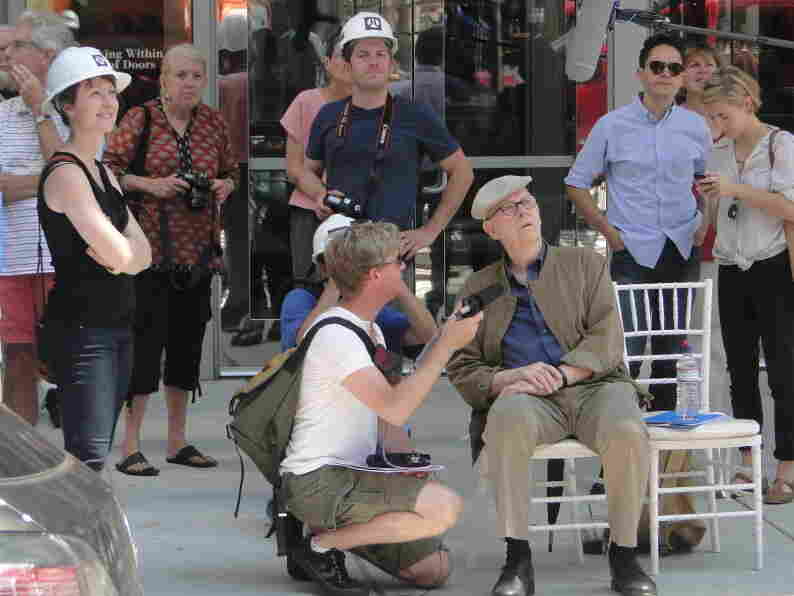 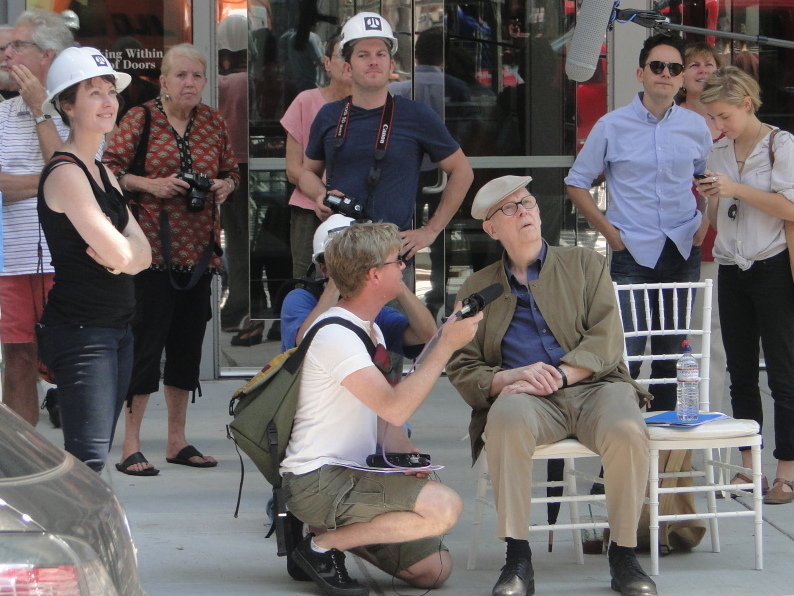 "The idea of putting freedom on a rubber stamp maybe implies that we take our liberties for granted in the U.S.," says Litt. "I think that's quite a profound idea, and something really worth thinking about and debating."

Provoking discussion is a big part of what Oldenburg's oversized sculptures are intended to do. Oldenburg says that's why he and his longtime artistic partner and wife, Coosje van Bruggen, who died two years ago, made frequent public appearances to talk about their work.

"We always gave a lecture in connection with the work, if we did it in say Des Moines, or Dallas, or San Francisco and so on," Oldenburg remembers. "We like the idea that the sculptures are not all in, say, New York or someplace — that they're scattered around the cities of America and Europe. ... There's a lot of people you're never going to reach. But we have reached I think quite a few people, in all parts of the country."

Claes Oldenburg may reach a few more people tomorrow night, when he officially unveils his newest conversation-starter in Philadelphia.