Accessibility links
NASA: Asteroids Pose Less Risk To Earth Than Thought NASA's most accurate census yet of near-Earth asteroids suggests that astronomers already know the location of more than 90 percent of the largest asteroids that could cause mass extinctions. The survey also suggests there are far fewer midsize asteroids than expected, but scientists don't know where most of these are. 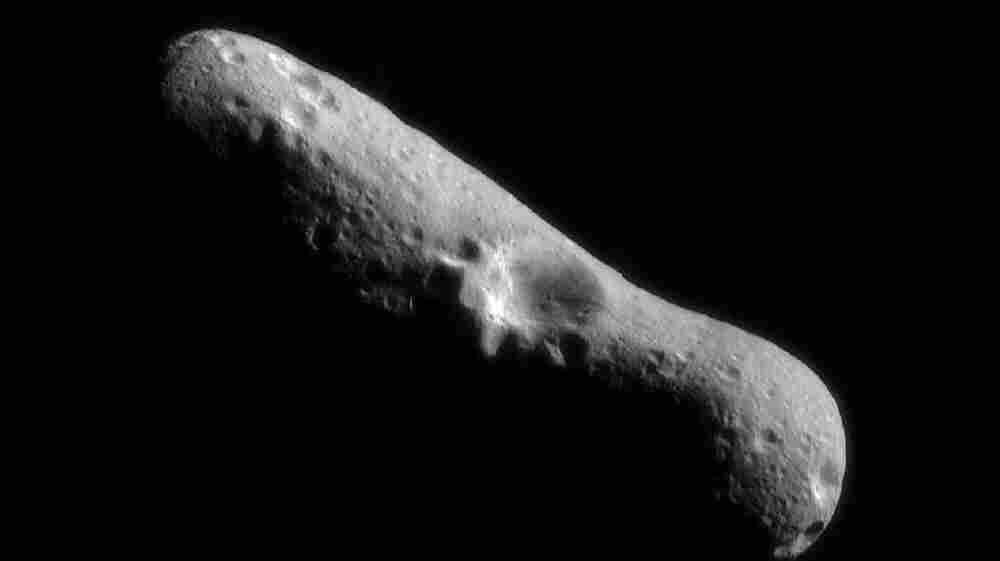 This picture of the Eros asteroid is the first of an asteroid taken from an orbiting spacecraft. The crater at the center is about 4 miles across. JPL/JHUAPL/NASA hide caption

Our planet's risk of being hit by a dangerous outer space rock may be smaller than scientists previously thought. That's according to a survey of the sky that NASA is calling the most accurate census yet of near-Earth asteroids.

"Our understanding of the near-Earth asteroid population has been significantly improved, and we believe that the hazard to the Earth may be somewhat less," says Amy Mainzer of NASA's Jet Propulsion Lab in California, who led the new study.

The Earth has been whacked by big space rocks in the past. One, about six miles across, is thought to have wiped out the dinosaurs. Scientists would like to prevent something like that from happening in the future, but it would take time to figure out how to best knock an incoming asteroid off its collision course.

Our understanding of the near-Earth asteroid population has been significantly improved, and we believe that the hazard to the Earth may be somewhat less.

Most of the known near-Earth asteroids have been discovered with ground-based telescopes, but these can't see everything.

To get a better sense of how many potentially dangerous asteroids might actually be out there, Mainzer and her colleagues did a new survey with the WISE telescope, launched in 2009.

They used it to get a representative sample of these asteroids that orbit the sun and have a risk of crossing Earth's orbit.

The study reassuringly suggests that astronomers already know the location of more than 90 percent of the very largest asteroids — the huge planet-busters that could cause mass extinctions.

"By virtue of the fact that we know these objects and we know their orbits, we can predict that they are no longer hazardous to Earth, in the sense that we can follow them and we know that there are none that pose any imminent risk of an impact," Mainzer says.

There's also some good news when it comes to midsize asteroids, between 330 and 3,300 feet wide. The survey suggests there are only about 19,500 of them — far fewer than the 35,000 or so that scientists had expected.

"However, it's very important to note that fewer does not mean none," Mainzer cautions.

Scientists also don't know where most of these midsize ones are — there are an estimated 15,000 midsize asteroids left to locate.

If, say, for instance one were to hit in the middle of the D.C. area, it would pretty much devastate the entire area within the Beltway.

These could cause serious damage if they hit the Earth.

Lindley Johnson, head of the near-Earth object program at NASA headquarters in Washington, D.C., says an asteroid the size of a football field could wipe out a major city.

"If, say, for instance one were to hit in the middle of the D.C. area, it would pretty much devastate the entire area within the Beltway," Johnson says.

So NASA plans to keep searching.

"We continue to run several ground-based teams that have been in operation for several years, and have actually found the majority of the known objects," Johnson says.

Hundreds of midsize asteroids near Earth are discovered every year, but at this rate, it would take decades to locate all of them and see if they pose a threat.

Last year, an expert committee convened by the National Research Council said there was no way NASA could meet a 2020 deadline set by Congress in 2005 to find 90 percent of asteroids that are about 450 feet or more across. It noted that NASA's budget for this kind of work has historically been small — only about $4 million a year.

Johnson says that the administration recently requested a budget increase to about $20 million. But that's still for Congress to decide.