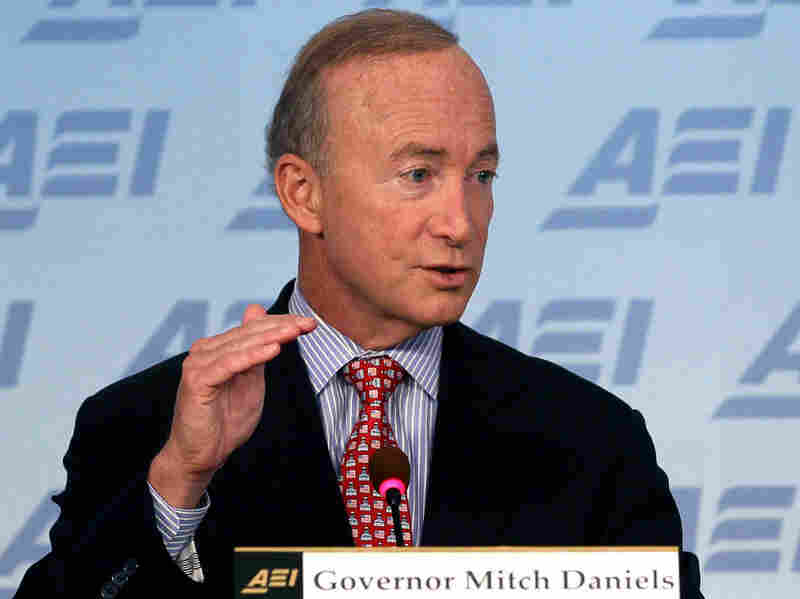 Social Security has been compared to Ponzi schemes for decades, says Indiana Gov. Mitch Daniels. In his new book, he lays out ideas for improving the system. Mark Wilson/Getty Images hide caption 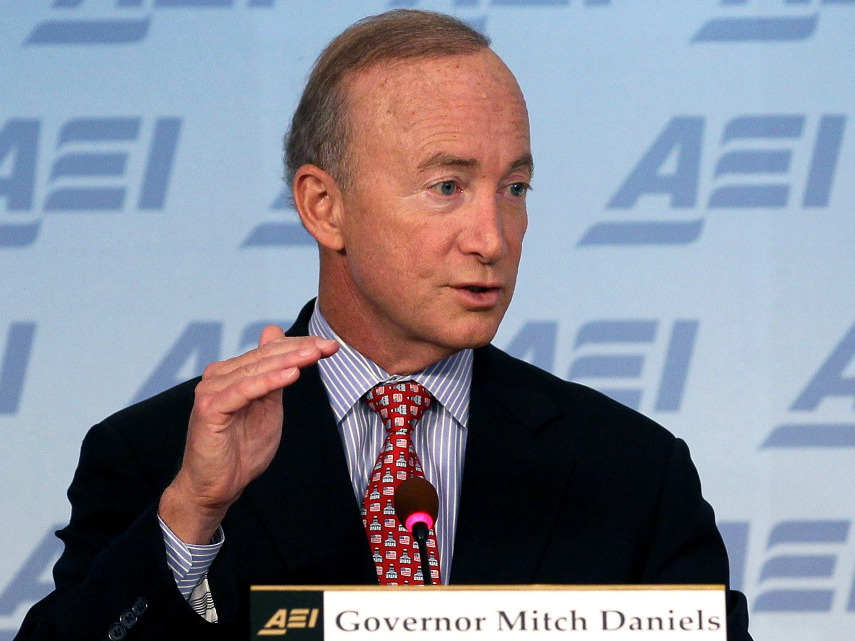 Social Security has been compared to Ponzi schemes for decades, says Indiana Gov. Mitch Daniels. In his new book, he lays out ideas for improving the system.

Indiana Gov. Mitch Daniels urges a new approach for Social Security in his new book, Keeping the Republic. In the book, Daniels writes that Carlo Ponzi — the con man whose name became synonymous with a swindling scheme — would have been "an ideal Social Security commissioner."

GOP presidential candidate Texas Gov. Rick Perry caused a stir recently by making a similar statement. But Daniels says neither he nor Perry is the first to see elements of a Ponzi scheme in the U.S. Social Security system.

"That comparison's been used for decades," Daniels tells NPR's Steve Inskeep. "Paul Samuelson, the liberal Democratic economist, was using it in the late '60s."

But the comparison is still a valid one, the governor says.

"I do think it's important in pointing out that Social Security is, and always was, a pay-as-you-go system," he says. "It never was, as many Americans were led to believe, an arrangement in which you invested in your own retirement. The money was always going right out the door to the retirees of the day."

Daniels, whose book portrays America — and President Obama — in deep trouble, says that he largely agrees with columnist Charles Krauthammer, who says the Social Security system needs to be adjusted, not abolished, and that the changes can come over time.

Changing the system, Daniels says, "would send a clear and positive message that we do not intend to go over a fiscal Niagara."

"The wisest course would be to say to today's retirees, nothing changes for you, but also to ask them to join in seeing that younger generations who are paying for their retirement today have some protection, too."

President Obama faces so much political trouble that one of his critics contends he's actually worried. Indiana Governor Mitch Daniels says he is worried that Republicans might think the campaign is going to be easy, and that they'll shy away from taking chances. Daniels decided not to run for the Republican nomination himself. President Bush's former budget director has written a book, called "Keeping the Republic." He is hoping the next president wins a mandate to make big changes in Medicare and Social Security.

GOVERNOR MITCH DANIELS: You know, Steve, I say in the early pages of this book, that I only wrote it because I'm alarmed - for the first time - about the condition of our country, and about its future. We're going to have to make big changes and make them soon; that very serious, painful consequences are certain if we don't. And they could be sudden as opposed to gradual.

INSKEEP: You write that you want to make big changes in both Social Security and Medicare. I want to ask about one of them, because it seems to be widely acknowledged across the aisle that Medicare costs an awful lot of money. It's going to cost more and more money as the years go on. But there's much more of a dispute about Social Security. Why do you think Social Security is a serious problem?

MITCH DANIELS: Well, it is unsustainable as it stands. The wisest course would be to say to today's retirees, nothing changes for you - but also, to ask them to join in seeing that younger generations who are paying for their retirement today have some protection, too.

INSKEEP: I suppose we should mention, since Rick Perry, the presidential candidate, has been in trouble for calling Social Security a Ponzi scheme in recent weeks - we should note you got there first, because you wrote this book some months ago. And on page 24 and 25, you actually say: Carlo Ponzi, the guy for whom Ponzi schemes are named, would make an ideal Social Security commissioner. Why is that?

MITCH DANIELS: Well, first, I didn't get there first. That's a comparison that's been used for decades. Paul Samuelson, the liberal Democratic economist, was using it in the late '60s. I do think it's important in pointing out that Social Security is, and always was, a pay-as-you-go system. It never was, as many Americans were led to believe, an arrangement in which you invested in your own retirement. The money was always going right out the door to the retirees of the day.

INSKEEP: He seemed to suggest that with relatively minor changes - not a complete reworking or abolition - you could put Social Security's numbers right because you have years to do it.

MITCH DANIELS: Yeah, bull's eye, that's exactly my viewpoint - underline fixable in that sentence. We are talking about the right issues now. Very different from when I outlined this book 21 months ago. There's been a Tea Party Movement that raised the consciousness of millions of Americans. There's been a Bowle-Simpson Commission; president ignored it, but not everybody else has.

INSKEEP: Social Security, and this is your own chart, remains relatively flat over time. And, of course, there is a trust fund to get Social Security through the next couple of decades. Is it really the thing we need to focus on right now?

INSKEEP: Extra money has been invested and put into bonds. That's what you're...

MITCH DANIELS: Yeah, they're just IOUs in there. There are no real assets, and the system was always set up that way. But change is going to come to these programs 'cause they're going to go tilt. Now, we can either wait and have a train wreck and possibly some very unfair changes, or we can try to make changes now that are more gradual, thoughtful and humane.

INSKEEP: Do you plan to endorse somebody in the presidential race?

MITCH DANIELS: I don't know. I'm not sure who'd care what I thought anyway. But...

INSKEEP: What do you mean, people wouldn't care what you thought? You know, it'd be a headline: Noted Author Mitch Daniels Endorses Blank.

MITCH DANIELS: Yeah, well, a starved news cycle might run it once.

MITCH DANIELS: I did. We did a little duet at Rider University for a political institute there, and talked about the things in this book.

INSKEEP: Did you discuss whether he should run?

MITCH DANIELS: I was careful not to press him about it. I think the world of him. I hope and believe we'll see him on the national stage. But, you know, I certainly will respect his decision if he decides that it's not the time.

INSKEEP: I'm sure that the likes of Mitt Romney or Rick Perry have picked up the phone, called you, come to meet you at some point - recently.

MITCH DANIELS: Well, I've heard from them and they're busy...

INSKEEP: Have they asked for your endorsement?

MITCH DANIELS: Oh, I guess you'd say they've - suggest that I'd be welcome to help out. But nobody has tried any high-pressure tactics yet.

INSKEEP: Thanks very much, Governor.

MITCH DANIELS: I appreciate it, Steve.