Accessibility links
Libya's Newest Concern: Looming Political Battles Libya's militias are a collection of regional groups that will have to learn to work together to form a new government. They are still talking for now, but there are clear differences and rivalries. 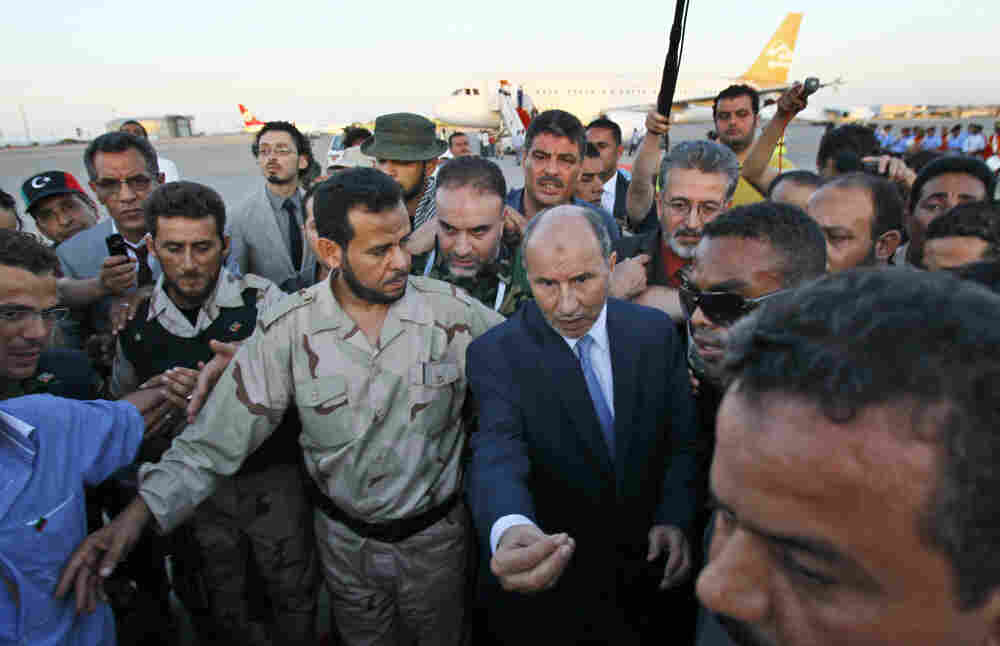 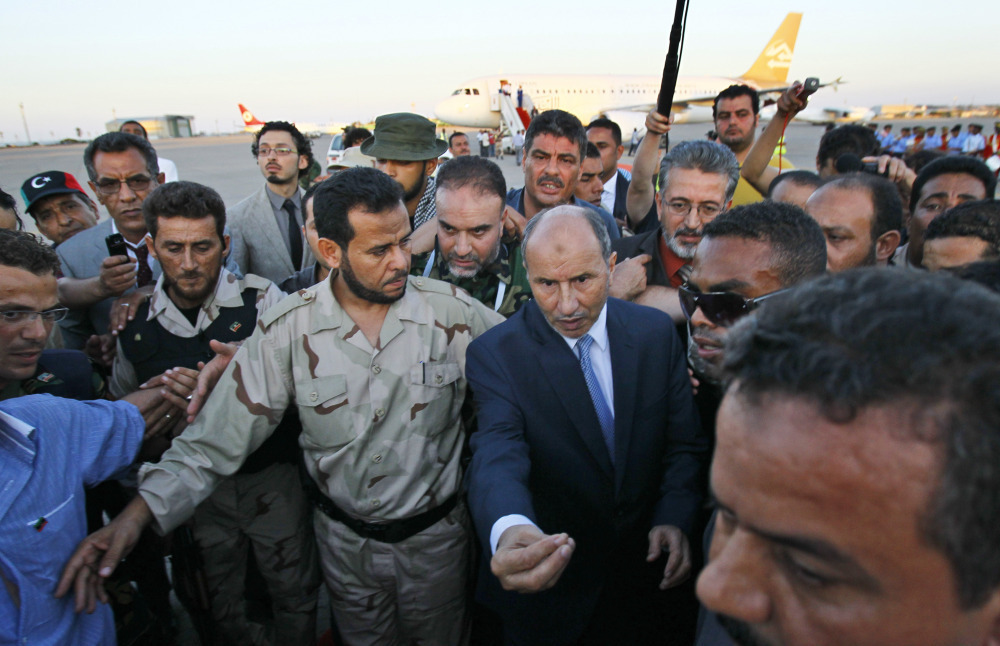 Abdel Hakim Belhaj (center left), a prominent militia commander, walks with Transitional National Council Chairman Mustafa Abdel Jalil in Tripoli on Sept. 10. The battle to oust Moammar Gadhafi produced a number of leaders who will have to work together to form a new government.

Libya's victorious militias are still fighting the last forces loyal to ousted strongman Moammar Gadhafi, but as the military endgame draws closer, some are worrying about the political battles that are just beginning.

The question is an old one for revolutionaries: How to go from a military triumph to a civilian government?

In Libya, the problem is magnified because the fighting is still going on and the military consists of various regional militias that don't answer to a single commander.

The rebels operate under the banner of the Transitional National Council, an unelected group that consists of Libyan dissidents, former exiles and officials who defected from the Gadhafi regime.

Mahmoud Jibril is the equivalent of the prime minister of the TNC, and he's trying to form an interim government that can run the country until a constitution is drafted and elections can be held.

But Jibril has become a lightning rod for criticism, some of it from militia leaders and their allies. He vented some of his own frustration at a news conference on Thursday, saying he doesn't plan to be a part of the interim government, and that the TNC would be doing him a favor by asking for his resignation now.

Jibril also said the formation of the interim Cabinet would be put off until Gadhafi loyalists are routed from two last cities, Sirte and Bani Walid. However, the militias have been advancing cautiously and the battles could take weeks, if not months.

Reports from the eastern city of Benghazi, where the TNC has been meeting, say the members simply haven't been able to agree on who should fill important Cabinet posts.

Some criticism of Jibril is coming from Misrata, whose rebels fought hard for months to take their city from Gadhafi's forces, then went on to play a big role in the capture of Tripoli.

Fathi Beshsagha, the spokesman for the Misrata military council, says Jibril has performed poorly as prime minister. And, he adds, he can say this as part of the give and take in the new Libya.

There's another factor in the effort to form an interim government — the militias controlled by Islamists.

The most prominent Islamist fighter is Abdel Hakim Belhaj, the military commander of Tripoli.

He was part of an unsuccessful attempt by an Islamist group to overthrow Gadhafi in the 1990s and later spent time in Afghanistan, where the Gadhafi regime said he was linked to al-Qaida.

Belhaj recently had an op-ed piece in Britain's Guardian newspaper and said that secular politicians are attempting to exclude the Islamists.

"It is as though they want to push Islamists toward a non-democratic option by alienating and marginalizing them," he wrote.

It's not clear what Belhaj meant by 'a non-democratic option,' but it's a worrisome thought in a country awash in weapons and fighters.

Belhaj may have as many opponents as Jibril, including the leaders of other militias.

Ibrahim Madani, a commander of a brigade from Zintan, another militia that saw hard fighting, says the rebel groups will fight to stop Islamists from hijacking the revolution:

"We stop them by talking first, and if they don't want, there's the other way, we can fight until the end," he said. "And not only me; you know there are a thousand of me."

For now, the fighters and the politicians of Libya are still talking, trying to build networks of trust.

Their fighters, he says, gave their blood for the freedom of Libya, not for political positions.