Accessibility links
Surgery Not 'A Magic Pill' For Obese Patients One of the fastest growing segments of the weight-loss market is surgery. But doctors warn that it should not be seen as a quick fix. Indeed, though surgery can help with diabetes and high blood pressure, some patients struggle with health issues even years after going under the knife.

Losing weight in America is big business. Americans spend $61 billion a year on everything from diet pills and exercise videos to meal plans, health club memberships and medical treatment. One of the fastest growing and lucrative segments of the weight-loss market is surgery.

And if you want to learn about the risks and benefits of going under the knife to lose weight, there's a great place to go in Los Angeles — and it's not a Beverly Hills doctor's office. Check out Power 106, L.A.'s popular hip-hop station, and its larger-than-life DJ, Big Boy. The DJ — seldom referred to by his given name, Kurt Anderson — used to be really big. 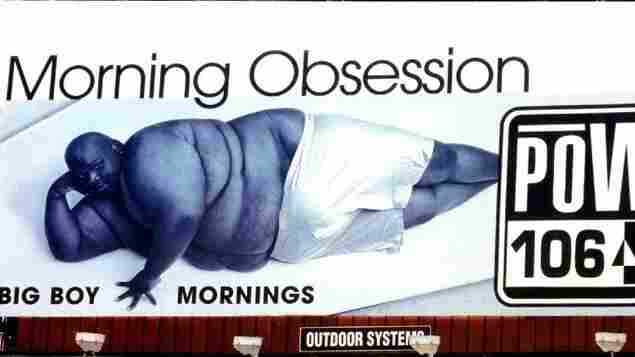 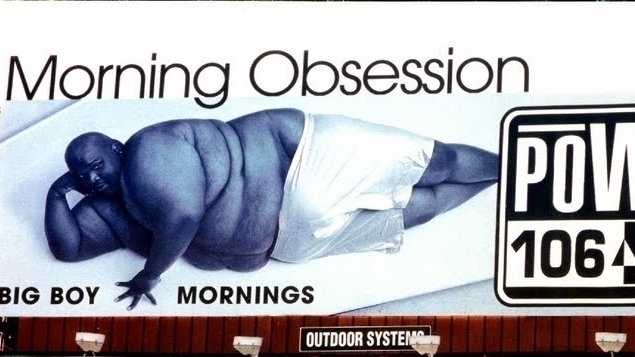 Before getting bariatric surgery, Los Angeles DJ Big Boy posed for a photo promoting his radio station, Power 106. He weighed more than 500 pounds.

"I had gotten up to like an 8X shirt and size 66 pants. My whole life I've always been big. It just went from big to bigger till I got to my biggest," Anderson says.

He reached 520 pounds. At that weight, Anderson posed provocatively for a photo in his underwear. It was plastered on billboards all around L.A. But he says he knew he wouldn't last at that weight.

Anderson says that after years of failed dieting, he decided on gastric surgery.

"There's really nothing in the field of medicine that can match what surgery can do for these patients," says Dr. Amir Mehran, the director of bariatric surgery at UCLA. He points out that there are many different types of bariatric surgery, from removing large portions of a patient's stomach to just restricting it so less food can get in. Mehran says each procedure has its risks and benefits. 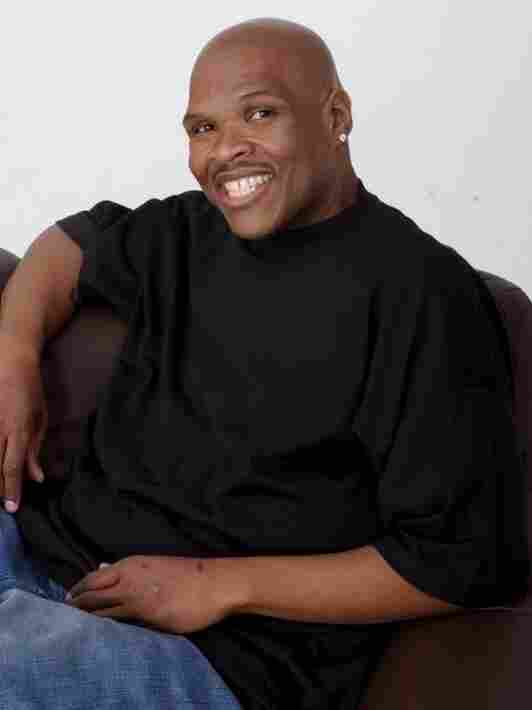 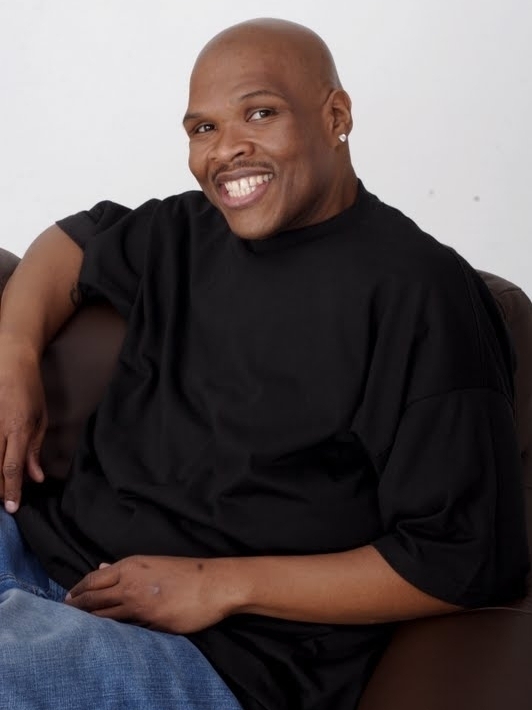 Eight years after his surgery, Big Boy maintains his weight right around 200 pounds.

"The surgery is not a quick fix. It's not a magic pill at all. It's a very strong tool. And depending on the surgery, some are stronger and some are weaker," Mehran says.

Big Boy had what is known as the duodenal switch surgery. More than 70 percent of his stomach was removed, and his intestines were rerouted. Eight years later, he maintains his weight right around 200 pounds.

But Big Boy wasn't — and isn't — the only overweight personality at Power 106. Three others have had bariatric surgery. Joe Grande chose the Lap-Band. It's a trademarked device that is surgically implanted around the top of the stomach.

It's been four years since Grande, whose real name is Joe Lopez, had the gastric band implanted. When inflated, the gastric band restricts the stomach so only a small amount of food can get in.

"Everybody always said, 'Joe, you carry your weight well.' I always looked like a football player. It wasn't like I carried it in my stomach. My weight was all around me. I looked like Shrek, basically, and people loved Shrek."

But unlike Shrek, Lopez had diabetes, high blood pressure and gout. Both his parents died in their 50s from complications due to diabetes. Lopez says he tried dieting and exercise for years. The lowest he could ever get down to on his own was 285 pounds. Eventually, he would gain it back and more. He had a lot of long-learned bad habits.

"You know, eating that rich Mexican food — 10 carbs for dinner. It's like, 'OK, we are having beans, fideo [pasta] with rice and other rice.' You grow up going, 'My mom was the best cook ever.' Everything was wrapped in bacon," he says. "Thanks for the diabetes! Love you!"

Bariatric Surgery On The Rise

Within three weeks of surgery, Lopez's diabetes and high blood pressure were gone. After taking medication for five years, he threw out all his pills. Lopez lost 125 pounds and became a spokesman for several bariatric surgery centers.

But not everyone is happy with the Lap-Band. At the UCLA surgery clinic, doctors won't use it. They say they don't like the idea of leaving a foreign object in the body indefinitely.

And there are objections to the aggressive advertising used by some surgeons.

For example, spots and billboards advertising 1-800-GET-THIN blanket L.A. Critics say the ads focus more on getting thin than getting healthy.

David Pyott, the CEO of Allergan, which manufactures the Lap-Band, said the company does not condone the ad campaigns.

"We don't always agree with the tone of some of those advertisements by our customer. But we're not the advertising police," Pyott tells NPR.

Pyott says thousands of Lap-Bands have been implanted in patients. It is a safe, simple and successful way for people to lose weight, Pyott says.

"It's a mechanical way of controlling hunger — after a couple of hundred of calories of food intake, to say, 'I am satisfied, I can take a break,' " he says.

When it comes to bariatric surgery, there are four common procedures:

Gastric Bypass: Like the duodenal switch surgery, doctors create a smaller stomach. Food is also diverted from the small intestines. However, nothing is removed and the stomach is smaller than with the switch surgery. Diabetes patients have also been helped by the surgery.

Adjustable Gastric Banding: A doctor implants a silicone ring around the stomach that is connected to tubing that goes to a port that sits above the abdominal wall, underneath skin. Using a needle, fluid can be added through the port to make it tighter (so patients eat less) or removed (so patients can eat more).

Vertical Sleeve Gastrectomy: Roughly two-thirds to three-quarters of the stomach, including hormonally active portions, is removed, but unlike the duodenal switch and gastric bypass surgeries, the intestines are not rerouted. This is the newest of the four methods.

Despite the safety reassurances, the American Society for Metabolic and Bariatric Surgery is also concerned that the message to obese clients overemphasizes cosmetics and appearance. Society President Robin Blackstone performs between 300 to 400 gastric surgeries a year at her Scottsdale, Ariz., clinic. But she says surgery should be the last resort — not something decided after seeing a billboard.

"It causes people to continue to have an image about thinness rather than about health," Blackstone says.

Blackstone says patients should be wary about going to a surgeon who only offers one type of surgical treatment.

For Big Boy, it's been many years of doctors' visits and dealing with side effects after he had most of his stomach removed in the gastric bypass. On the day he was interviewed for this story, he was struggling with edema. His lower legs were swollen.

"I'm still going through medical problems. I'm at the doctor all the time," he says.

And he says he's still tempted by fatty food. He said the big box of doughnuts that is frequently on the table at the radio station calls out to him.

Lopez, who lost 125 pounds with the Lap-Band, says he still has an eating problem, too. Lopez says once he even had the doctor loosen his band. He was going on his honeymoon and wanted to indulge.

"Because I went to an all-inclusive resort and I wanted to eat a little more, so I asked my doctor if I could get it adjusted. And I gained 20 pounds, and it shows that left to my own devices I can gain about 20 pounds in a couple of weeks," Lopez says.

Once back, he had it tightened and dropped the extra weight.

Such success stories have helped boost the number of bariatric surgeries performed every year — more than 200,000 annually, according to the American Society For Metabolic and Bariatric Surgery. And that number could grow higher. Lap-Band maker Allergan recently got FDA approval to market the device to people needing to lose as little as 50 pounds. And the company is waiting for approval for its use in another obese group — teenagers.