Accessibility links
Recycled Water Quenches San Antonio's Thirst Texas has implemented widespread water restrictions due to a historic drought. Still, many large Texas cities are using up to 200 gallons of water per person per day. San Antonio is guzzling much less with the help of a state-of-the-art water treatment plant. 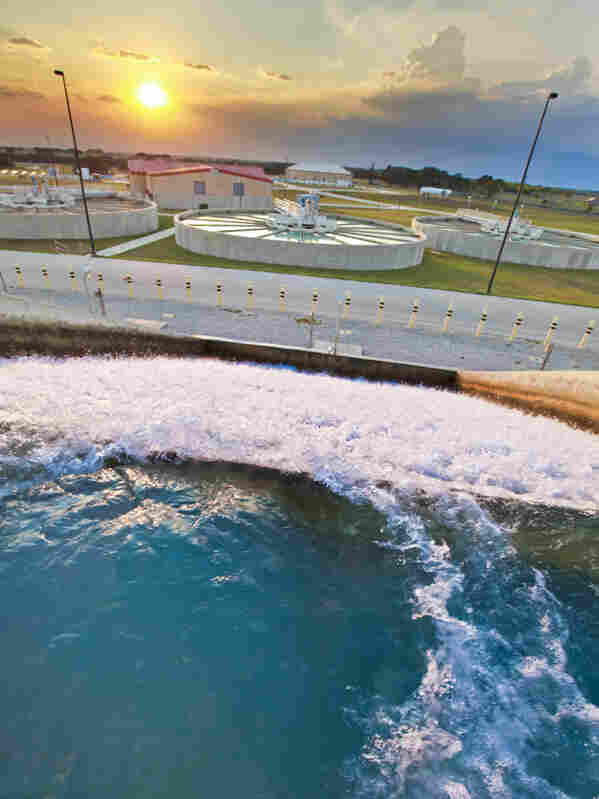 In times of drought, the Twin Oaks Aquifer Storage and Recovery Facility pumps water up from underground and sends it back to San Antonio for use. The facility uses water from the Edwards Aquifer and the Carrizo Aquifer. Paul Robinson/San Antonio Water System hide caption 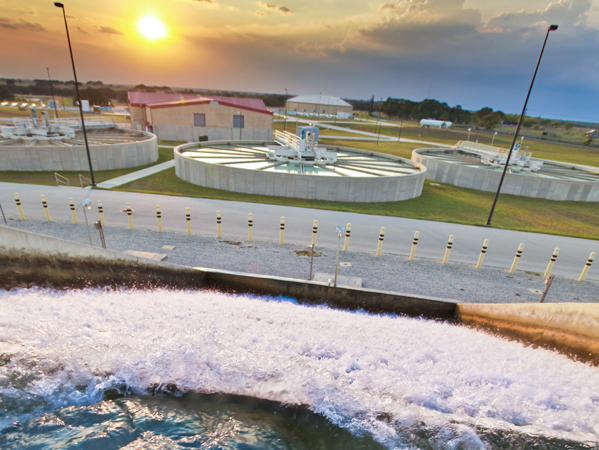 In times of drought, the Twin Oaks Aquifer Storage and Recovery Facility pumps water up from underground and sends it back to San Antonio for use. The facility uses water from the Edwards Aquifer and the Carrizo Aquifer.

Gliding along in a flat-bottom boat on the San Antonio River thorough the heart of downtown San Antonio is a beautiful and authentic Texas experience.

There's one thing a boat tour guide is not going to mention, however. Texas is in the middle of a historic drought, and the river that tourists are cruising along with ducks, big bass, catfish and perch is actually treated sewage water.

Despite widespread water restrictions, many large Texas cities and especially their well-to-do suburban neighbors are using up to 200 gallons per person per day. San Antonio is using much less.

"During wet seasons, the river functions like any other river would," says Steve Clouse, the chief operating officer of the San Antonio Water System. "But during the dry seasons, we used to pump from water wells to make sure we had a river — otherwise there wouldn't be water here."

To keep the river flowing, the city used to have to pump up to 5 million gallons a day from its precious supply, the Edwards Aquifer. Now, by using a state-of-the-art water treatment plant, the city produces high-quality, recycled water that's just shy of being drinkable.

Dismal Sights Of The Texas Drought

"We have a goal to save a billion gallons of water every single year by working with all of our customers," says Karen Guz, the water system's director of conservation. She says the plant is hitting that goal. "We are a community that has figured out that it is better to save water than to worry about having to always just acquire more water."

Guz says it started in the early '90s when the Sierra Club sued the city in federal court to protect an endangered species — the blind salamander — that lived in the water supply of the Edwards Aquifer.

When the judged ruled in favor of the Sierra Club, San Antonio politicians and newspapers spitted with rage. Twenty years later, the current San Antonio Mayor Julian Castro says his city has learned the judge was right.

"The city, over these last two decades, really has made lemonade out of lemons. In fact, the number of gallons per consumer in San Antonio per day that is used has gone down from just over 200 to about 130," Castro says.

Unlike the lush lawns of Dallas, there are yellow lawns everywhere in San Antonio. The entire city has a different mindset — neighbors narc out the cheaters next door to the water cops. After a warning, fines are steep. In San Antonio, everyone's in it together — whether or not they want to be. 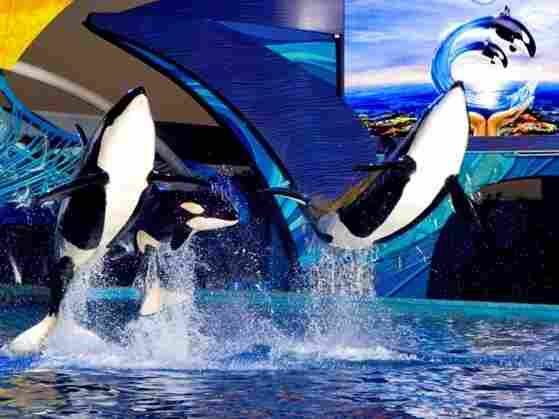 At Sea World in San Antonio, water that splashes out from Shamu's 5-million-gallon tank is captured then prepared for reuse through an on-site filtration system. Sea World San Antonio hide caption 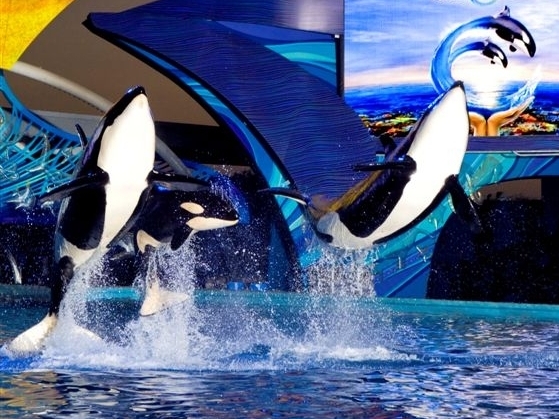 At Sea World in San Antonio, water that splashes out from Shamu's 5-million-gallon tank is captured then prepared for reuse through an on-site filtration system.

At Sea World, they want to. They've cut their monthly water use from 8 million gallons to 4 million gallons in the last three years. When Shamu splashes the lower rows with fountains of water from his 5-million-gallon tank, the water that looks like it's going down the drain is actually headed for capture. In fact, Sea World has built its own on-site water-filtration system.

As important as the conservation is, what's really saving San Antonio right now is its aquifer-storage system. During times when the rains are plenty and the Edwards Aquifer is full, San Antonio aggressively pumps the water out and stores it 40 miles away in a sand formation called the Carrizo.

Nobody knows how much water the Carrizo could ultimately store, perhaps as much as 65 billion gallons. Now, in the midst of this devastating drought, the Carrizo's massive pumps are sending this rainy-day water back to the thirsty city from whence it came.

"It cuts down on the amount of water that San Antonio uses from the Edwards during a critical time, which is good for the entire region," says Jeff Haby, director of production. "I think it's a huge benefit. I'm very proud of it."

San Antonio's approach to its water has saved it this year, but as summer turns to fall and winter turns to spring, if the rains don't come, San Antonio and the rest of Texas are going to learn what the word "drought" really means.