Accessibility links
'Elizabeth And Hazel': The Legacy Of Little Rock Author David Margolick explores the tumultuous lives of — and off-and-on relationship between — Elizabeth Eckford and Hazel Bryan, two women made famous by the 1957 "Crisis at Little Rock," where Eckford was one of the first black students to attend a major high school in the formerly segregated south. 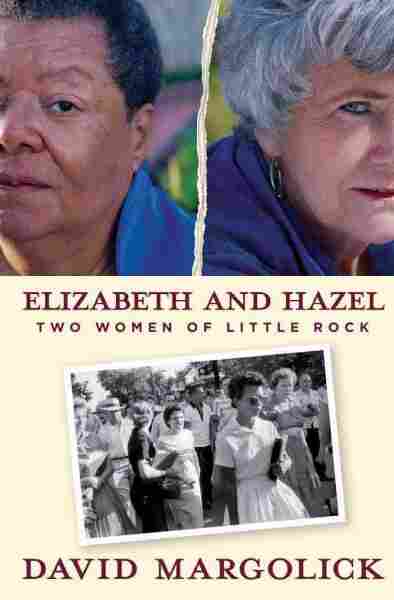 In September 1957, in the wake of the Supreme Court decision that outlawed racially segregated schools, the governor of Arkansas posted the National Guard at the front door of Little Rock Central High School. Despite the local school board's agreement to integrate classes, he was determined to prevent black students from entering the building on the first day of school.

Fifteen-year-old Elizabeth Eckford was the first of a group that came to be known as the Little Rock Nine. She was met by a mob of white segregationists, many of them students, who screamed, spat and threatened her.

News cameras and photographers were all over that day, but there is one picture in particular that came to represent that incident to the world: that of Eckford with her back to an advancing crowd, with one young white woman screaming at her — another teenager named Hazel Bryan. In later weeks, President Dwight Eisenhower sent federal troops to escort the children to school.

"Here is where, in most documentaries, the music swells and the credits roll," author David Margolick tells NPR's Audie Cornish. But there was more to the story, of course, and Margolick's book Elizabeth and Hazel picks up where most leave off.

In the days immediately after the incident, Eckford and the rest of the Little Rock Nine experienced hateful treatment from other students. It got worse as the school year continued.

"They had things thrown at them, they were slammed into lockers, they were thrown down the stairs," says Margolick. "They had ink thrown on their clothes. It was really quite a nightmarish experience for them, because the school administrators generally looked the other way." 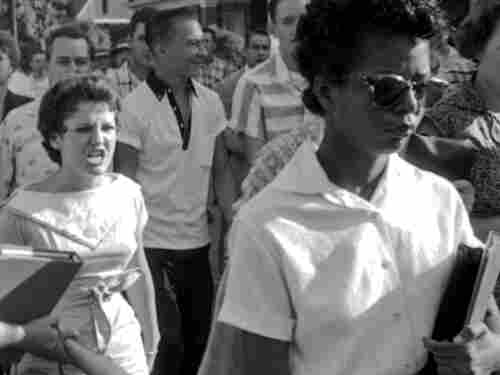 Elizabeth Eckford (right) attempts to enter Little Rock High School on Sept. 4, 1957, while Hazel Bryan (left) and other segregationists protest. The book Elizabeth and Hazel chronicles not just that event but the months and years that came after in the two women's lives. Will Counts /via Yale University Press hide caption 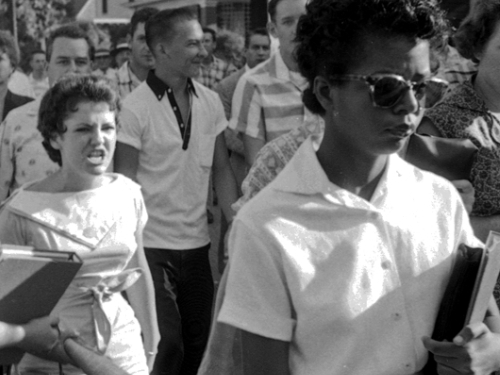 Elizabeth Eckford (right) attempts to enter Little Rock High School on Sept. 4, 1957, while Hazel Bryan (left) and other segregationists protest. The book Elizabeth and Hazel chronicles not just that event but the months and years that came after in the two women's lives.

Will Counts /via Yale University Press

A 'Symbol Of White Recalcitrance'

Interestingly enough, Bryan — the other famous figure in that iconic photograph — didn't end up attending Central High School. Margolick explains in his book why Bryan's parents decided to move her to another school.

"That's one of the many complexities in the story," he says. "Hazel's family was concerned about her sudden notoriety after having appeared in a picture that ran all over the world. She became the symbol for white recalcitrance for that entire year, when in fact she was never in the school."

Often, stories from the civil rights struggle recognize the strength and stoicism of African Americans living through times of adversity. Margolick's book, which expands on the weeks, months and years after the Little Rock incident, shines some light on the fallout from such stories — specifically on Eckford's battle with post traumatic stress, and on the intriguing relationship that grew up between the adult Eckford and the woman who once tormented her.

"I think we have a tendency to sentimentalize these stories and try to find happy endings," Margolick says. "Elizabeth's story — her road was very rocky. ... The events in the school that year left a very profound mark on her."

Hazel Bryan, for her part, led a fairly conventional life. At 17, she dropped out of school, married and had children. But she, too, was haunted — by the photograph for which she became notorious.

"She ... never forgot the picture and her role in the picture, and she grew increasingly tormented by her own role in this awful story," Margolick says.

At one point, five or six years after that notorious day, Bryan tracked Eckford down by phone, and apologized. 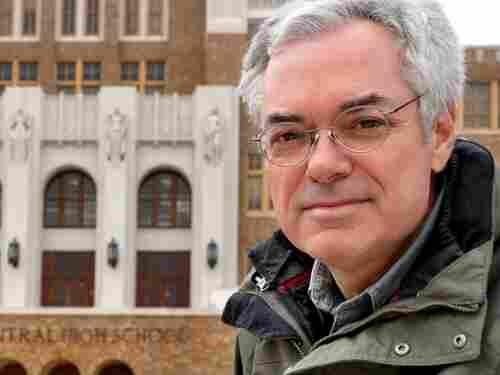 David Margolick is a contributing editor at Vanity Fair and was previously a legal affairs correspondent for The New York Times. His prior books include Strange Fruit: The Biography of a Song. Lawrence Schiller /Yale University Press hide caption 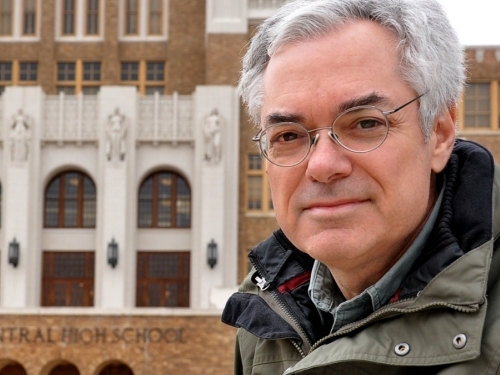 David Margolick is a contributing editor at Vanity Fair and was previously a legal affairs correspondent for The New York Times. His prior books include Strange Fruit: The Biography of a Song.

'An Amazing And Inspiring Couple'

"Something extraordinary happened," Margolick recalls."Not only did he take a picture of the two of them smiling in front of Central High School — from which they later made a poster labeled 'Reconciliation' — but later, when the cameras were turned off, Elizabeth and Hazel came to know one another."

It wasn't easy, of course, but after "kind of an awkward start," the two spent quite a lot of time together. They traveled, spoke to school kids. Not just about the infamy of that day in 1957, but about their respective backgrounds, about who they were then and who they'd come to be since.

"They were really kind of an amazing and inspiring couple," Margolick says.

Not forever, though. By 2007, 50 years after the day of the photograph, the friendship seemed to have soured.

That year, Eckford told NPR that Bryan had told her she "had amnesia about that, and she didn't remember anything" about the original incident. But over the years, Eckford said, "I came to understand that she [had] had contact with those students every Saturday on a local [TV] dance show. And she was part of an organized group that attacked us physically in the school."

And so the happy ending came to something of an end. The two women grew "increasingly estranged," Margolick says.

"Elizabeth felt that there was no way that Hazel could have done something so egregious, so casually," he says.

A friendship that had been the subject of intense scrutiny had been undone, at least in part, by the scrutiny it was subjected to.

There's a lesson there for the rest of us, he argues.

"I think that are still great misunderstandings and distrust between the races," Margolick says, "and I think that when two people of good faith try to make something work and it ends as sadly as this has, it says something profound about the challenge that still confronts us."

But he's not a fatalist.

"There's a very profound connection between them, and one shouldn't walk away from the book completely pessimistic," Margolick says. "There's been a lot of progress made, too, and these two women will always be joined together."