Accessibility links
Microsoft, Google Tussle Over Android Phone Patents Google claims that Microsoft is unfairly raising the price of smartphones. Both Samsung and HTC make phones with Google's Android operating system. They have both agreed to pay Microsoft — not Google — for the privilege. That's because Microsoft claims Android steps on its patents. 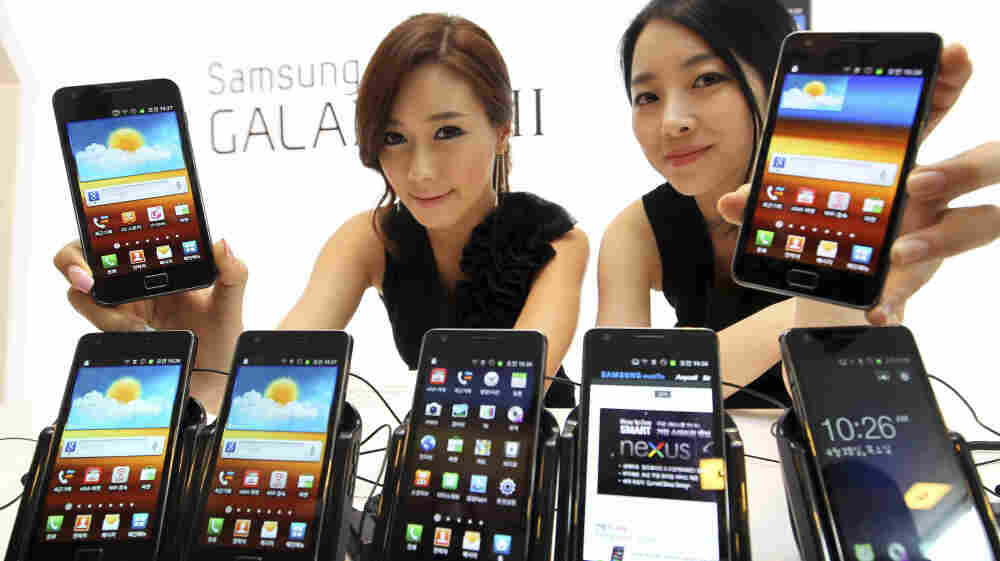 The Galaxy S II is a Samsung smartphone that runs on Android. Analysts say Microsoft could be getting as much as $15 for each phone Samsung sells.

Apple's iPhone may be the most talked about smartphone on the market, but there are far more phones using Google's Android operating system — 40 percent of the U.S. market. Microsoft's Windows for Mobile comes in near the bottom, with around 5 percent.

But Microsoft says Android steps all over its patents.

"Microsoft has invested for decades billions of dollars. In fact, this year alone we were investing over $9 billion in research and development in creating innovations in the software space for these type of devices," Microsoft Deputy General Counsel Horacio Gutierrez says.

Microsoft has told phone-makers using the Android operating system that they need to pay up, because Android is built on software that is patented by Microsoft.

Samsung, the largest maker of Android phones, isn't saying what it's paying. But analysts say Microsoft could be getting as much as $15 for each Android phone Samsung sells.

Julie Samuels, a patent attorney with the nonprofit Electronic Frontier Foundation, is skeptical of Microsoft's motives. She says companies that aren't winning with consumers often assert their patents.

"When faxes started to go out of style, all of a sudden you saw this crazy uptick in litigation among fax companies," Samuels says. "It's because when a party isn't making much money selling their product, they realize they can maybe monetize their patents instead."

Not all companies have agreed to pay Microsoft licensing fees on Android. Motorola has gone to court, though that company's mobile unit was recently acquired by Google. Barnes & Noble is in court because it's using the Android system for its Nook e-reader. Kent Walker, Google's general counsel, says Microsoft hasn't proven that Android steps on any of its patents. And he questions the quality of Microsoft's patents.

"Many software patents are simply overbroad and vague," Walker says. "In fact, when they've been re-examined by the patent office, they're either invalidated or cut back, roughly 80 percent of the time."

Microsoft and Samsung won't say which Android patents are part of their licensing deal. But it is possible to see some of the patents because they're being used to sue Motorola and Barnes & Noble.

Patent No. 5889522 — a patent for bringing up different windows in a browser — was filed in 1994 before the days of smartphones and e-readers. David Martin, an expert who evaluates the value of patents, says not only is it a broad patent — it wasn't even a novel idea. Martin says Microsoft had a lot of company.

"They were not alone in the universe, but they were very clearly in heavy company in what they were doing," Martin says.

He says that in the 1990s, the U.S. Patent and Trademark Office was bombarded with requests for software patents, and there was a lot of confusion. Often, patents were granted to companies for the same thing.

Now it's easier to settle than it is to sort it all out.

"It becomes expedient for parties to settle, because it allows the secrecy ... that protects the absence of quality in both portfolios from ever having to be confronted," Martin says.

Of course, not everyone agrees that Microsoft is holding a portfolio of lousy patents, even if some of them aren't good. Florian Mueller, an intellectual property consultant, says that Android may be infringing on Microsoft patents.

"Maybe not all of them are valid, maybe not all of them would be found to be infringed, based on a detailed analysis," Mueller says. "But chances really are, if they asserted everything in court, if they went to court over their whole past portfolio, that probably Android would infringe hundreds of them."

We may get a chance to find out if that's true: If Google's acquisition of Motorola Mobility is approved, then it will be Google facing off directly against Microsoft in court over its Android operating system.

But in the meantime, Android phones may cost more because the makers have to pay Microsoft. And that may help give Microsoft's Windows operating system a better chance in the smartphone market.