Accessibility links
Romance Novels, Hairless Chests, And 'Everything I Know About Love' A new book argues that whatever you already know about relationships, you can discern from romance novels. It may sound frivolous, but its author is an expert on the subject.

Romance Novels, Hairless Chests, And 'Everything I Know About Love'

Romance Novels, Hairless Chests, And 'Everything I Know About Love' 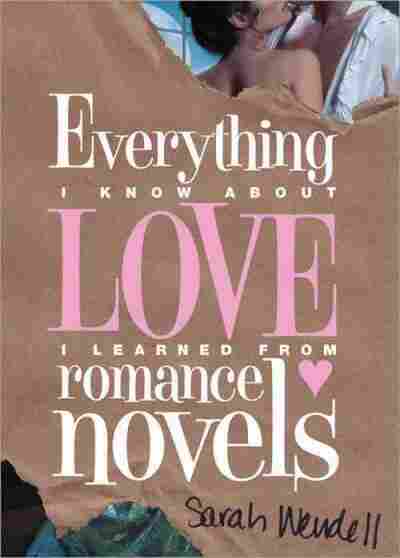 Everything I Know About Love I Learned from Romance Novels

Sarah Wendell undoubtedly knows exactly what you're thinking when you hear the title of her new book, Everything I Know About Love I Learned From Romance Novels.

She's been working at the web site Smart Bitches, Trashy Books for years now, and she's heard everything you care to say about what kind of a woman would actually learn everything she knows about love from romance novels. You're thinking: This is how people develop unrealistic expectations and cannot form healthy relationships, and what's the deal with the bosoms and bodices and pecs and roses and OH RIGHT, LADY, I GUESS EVERYONE IS SUPPOSED TO BE FABIO.

(It's always Fabio in comments of this kind. Fabio is to romance novels as eating bugs is to reality shows.)

She knows. She's over it. I've been reading Sarah for a long time — and, in the interests of full disclosure, we chatter back and forth on Twitter now and then about Downton Abbey and what books I should read next — and I can tell you, you have nothing snide to say that she hasn't already been told. Probably many times. But she remains, as I said she was back in late 2009, one of the best explorers I know of the interesting aspects of things typically deemed lowbrow and unimportant, and this book is a great example.

Collecting comments from her readers and from authors, as well as drawing on her own experience as a reader and a blogger, she sets out to explore the relationship between what romance readers get from novels and what they experience in their own lives. She talks about the kinds of men you meet on the page, the kinds of conflicts that arise between couples, and the qualities that separate healthy relationships from unhealthy ones.

What Sarah ultimately identifies is not a one-way transfer in which books teach women (because it is mostly women) about romance. It's more of a feedback loop. That's the trick to the book's title. If it were entirely, totally accurate, it would be Everything I Know About What I Already Think About Love, I Learned From Romance Novels. While her thesis is not that a romance novel indoctrinates readers into believing in certain kinds of relationships — that would be creepy — there's a strong argument here that the genre helps readers identify and articulate needs and feelings they already have, as they notice what kinds of books and heroes they gravitate toward.

This is one of the interesting points about genre entertainment in general: when there are elements of formula, identifying which versions of that formula appeal to you is surprisingly enlightening. Which iteration of a hero, for instance, do you choose, and what does it mean when you do? Everything from personality to chest hair tends to be specified in great detail; you can pretty much take your pick.

I'll give you an example. (You knew I would.) I'm a romance reader myself, but I almost never read historical romances, which are probably more numerous than any other kind. I don't read the ones with the voluminous skirts and Lord Whomever and Lady Anne Blah Blah Blah whose father is the Duke or whatever happens in those books. (I don't know. I think they mostly drink sherry?)

Instead, I am almost entirely devoted to contemporaries, which are books set in the approximate here and now, in approximately the culture and world I live in. I had never given a whole lot of thought to why that is, until I read this book and realized that for me, freestyle back-and-forth banter is so fundamental to any remotely affecting flirtation that the courtly love stuff — people who cannot speak of their feelings because IT IS TABOO — is too restricting. I am what I am, and nothing charms me like a good zinger. I don't like status and manners interfering with everybody yammering a mile a minute. (See above: I am what I am.)

Other people are the opposite: they're charmed by the restriction, and they find the unspoken things to be the most romantic. Corsets, in that way of seeing the world, are sexy precisely because they're an obstacle. I prefer for the obstacle to be stubbornness and never shutting up. Potato, po-tah-to. But the fact that I feel this way is something I arguably learned and noticed from reading and then reflecting on these books. (None of which contain Fabio, I'll just have you know.)

There are plenty of variations on the theme. Some people find possessive, aggressive partners (within reason) to be alluring, and some find them terrifying. Some people like a lot of overt reassurances that they're loved, and other people like things to go unspoken. When you really, really love a book that does, in fact, have a lot in common with other books like it, it's a kind of spelunking into your own tastes, not only in reading, but in reality. Not because you actually expect anything to go as it does in a book, but because individual elements jump out and make one book up your alley while another isn't. Why ... well, why does your brain see the book and say, "This one"? It's not necessarily the book you learn from as much as it is the fact that you picked it.

The sex chapter, incidentally, works basically the same way. It's less about "I read this in a book, so this is how you do this particular thing," and it's more about ... well, let's make it about handholding, just to keep things on the up and up. The analogy would be that the book would allow readers an insight like, "When I read about having my right hand held, that's not sexy, but when I read about having my left hand held, that's very sexy, so maybe I'll ask the next guy to hold my left hand instead of my right hand." There you go; you've learned something. Not about handholding, but about you.

Lest you conclude the book is entirely analytical, I will assure you that it contains Sarah's trademark snappy, funny writing, as well as her tireless defense of the readers she's met. One example:

Ironically, many people who disdain the romance genre and look down on the women who read it presume that reading about courtship, emotional fulfillment, and rather fantastic orgasms leads to an unrealistic expectation of real life. If we romance readers are filling our own heads with romantic fantasies, real men and real life won't and cannot possibly measure up to our fairy-tale expectations, right? Wrong. Wrongity wrong wrong wrong. That accusation implies that we don't know the difference between fantasy and real life, and frankly, it's sexist as well. You don't see adult gamers being accused of an inability to discern when one is a human driving a real car and when one is a yellow dinosaur driving a Mario Kart, but romance readers hear about their unrealistic expectations of men almost constantly.

It's always refreshing when anybody cares about anything enough to put a title on a book that is guaranteed to draw the same angry snorts she's been hearing for the last ... oh, five or ten years. I am inspired to write a book called I Am Made Of Television, Slapstick And Jackie Collins Books. I owe no less.