Accessibility links
Crowd Forces Libyan Jew Out Of Synagogue The last remaining members of the Jewish community in Libya were driven out more than 40 years ago. Despite this, David Gerbi came back to Libya to help the rebels as they ousted Gadhafi in a six-month uprising. Gerbi hopes to re-establish the Jewish community, but he has run into problems. 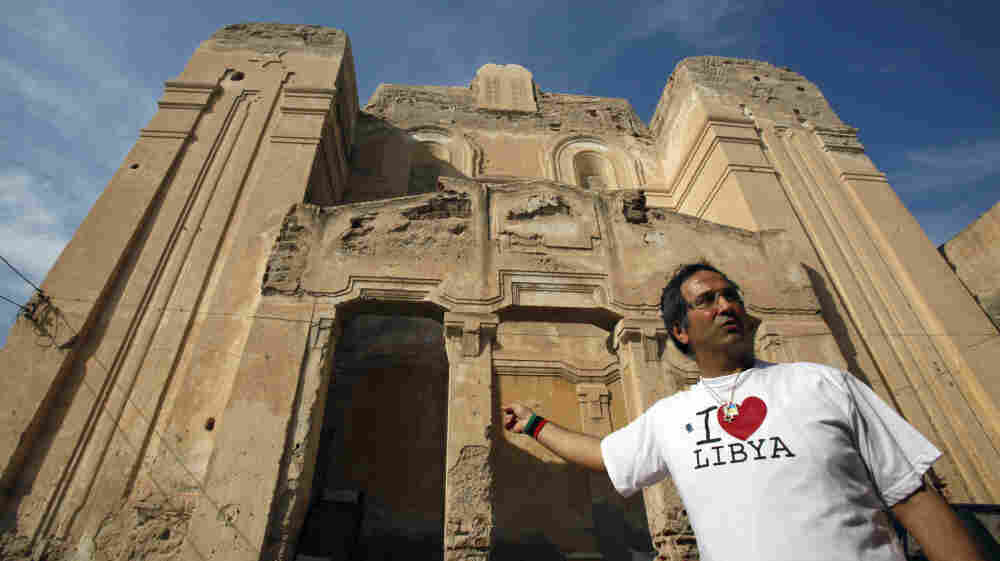 David Gerbi stands in front of the main synagogue in Tripoli, Libya, on Sunday. An exiled Libyan Jew, he has returned after being away for more than 40 years. He hopes to restore the synagogue and create an atmosphere of tolerance in the aftermath of Gadhafi's ouster.

David Gerbi, a Jew whose family fled Libya more than four decades ago, visited Tripoli's old Jewish synagogue on Monday with big plans. He went to pray and to clean up garbage from a building long empty, though still grand with its soaring arches and butter-colored walls.

Gerbi, a 56-year-old psychoanalyst who has lived in Italy, said he had permission for the restoration from the local Muslim cleric and members of the Transitional National Council, the force that ousted Moammar Gadhafi back in August.

But two days into his effort, it came to an abrupt end.

"The building is not safe. The area is not safe. There are a lot of people armed. We don't know what happens. So the best thing for him is to leave," said Hadi Belazi, one of many people in a crowd that gathered outside the synagogue in the city's old Jewish Quarter.

The atmosphere was tense, and Belzai's son Haitham agreed with his father.

"It's not the right time for this," he said. "It's a very sensitive matter. We appreciate having different religions in our country. We want that. But not at this time."

This is the old persecution. This is thousands of years that they always needed to kick out the Jew. And now they throw me out again. I don't accept this anymore.

David Gerbi, Libyan Jew who returned to Tripoli to re-establish its synagogue

The Jewish community in Libya dates back thousands of years. Most of the Jewish population immigrated to Israel after the Jewish state was established in 1948. But several thousand still remained in Libya. They ultimately left after the 1967 Mideast War — as did Gerbi's family — in response to the heightened tensions in the region. After Gadhafi came to power in 1969, he expelled the remaining Jews and confiscated their property.

For more than 40 years there was virtually no Jewish presence in Libya, though there was anti-Semitism. Calling someone a Jew in Libya is considered a serious insult.

Despite this, Gerbi came back to Libya to help the rebels as they ousted Gadhafi in a six-month uprising. Gerbi, who assisted with psychological treatment, earned the nickname "the revolutionary Jew."

He was widely believed to be the first Libyan Jew to return, though he hoped he would not be the last.

But his prayers were interrupted at the synagogue, and he emerged to the commotion outside.

As he was talking, his security guard whisked him away, afraid for his life.

"My intention was to clean the synagogue and take the garbage out of there," Gerbi said. "I am scared only of God. If I have to die in this moment, I die."

As he walked down the street, people turned to look at him. Wearing a yarmulke and a Star of David pendant, he's was hardly inconspicuous. One Libyan man confided he had never seen a Jew before.

Gerbi's presence and his quest to re-establish the synagogue is a test for the nascent Libyan leadership whose sponsors in the international community will be watching to see how a Jewish Libyan is treated.

A spokesman for the Transitional National Council, Jalal el-Galal, said that contrary to Gerbi's claims, he did not have authorization from the TNC to restore the synagogue.

"It's an illegal act because he has not [received] permission from anybody," he said. "I think it's a very sensitive issue at a very critical time. You are inciting something by not going through the proper channels."

Back on Tripoli's streets, Gerbi said he wouldn't be leaving.

"Enough of this," he said. "This is the old persecution. This is thousands of years that they always needed to kick out the Jew. And now they throw me out again. I don't accept this anymore."

He entered his hotel, with the synagogue he hoped to restore out of his reach for now.