Accessibility links
Wall Street Protests Stretch On, Reasons Vary Protesters in New York's financial district show no signs of going home as their demonstration enters its third week. Day 15 of "Occupy Wall Street" brought out participants in zombie makeup. The protests, which have spread to other cities, have a variety of causes, but most center around economic justice.

Protesters in New York City near Wall Street show no signs of going home anytime soon as their occupation enters its third week. If anything, the protesters seem emboldened by the arrest of some 700 people during a demonstration on the Brooklyn Bridge over the weekend.

Those events have focused more attention than ever on the occupation, though what exactly the protesters want remains a bit unclear.

On Monday, Day 15 of "Occupy Wall Street" brought out the zombies.

Demonstrators dressed up in black, white and red zombie makeup. Protester Trevor Rallston's costume included a fake $1,000 bill attached somehow to the corner of his mouth.

"Out here today to juxtapose zombie-eating money between corporate bankers that consume everything. Never enough. Must have it all! Tax the poor! Tax cuts for the rich!" Rallston says in a throaty zombie voice. 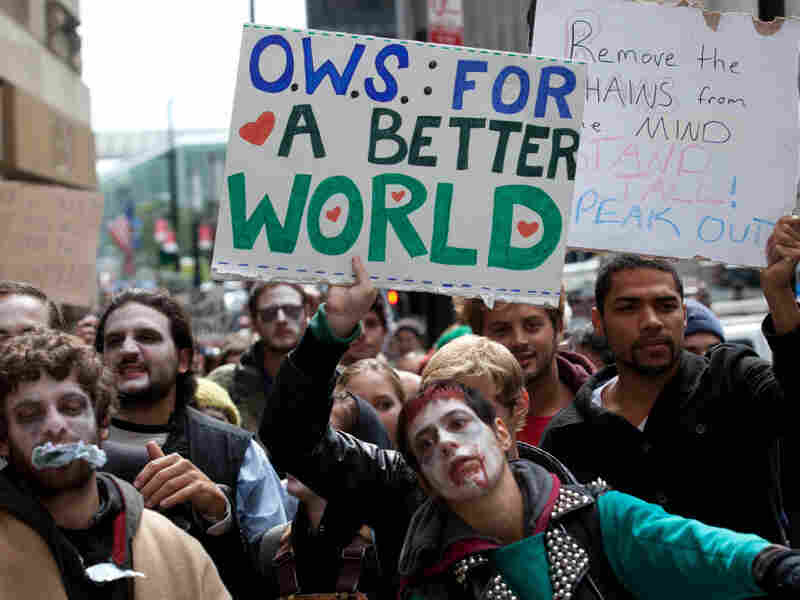 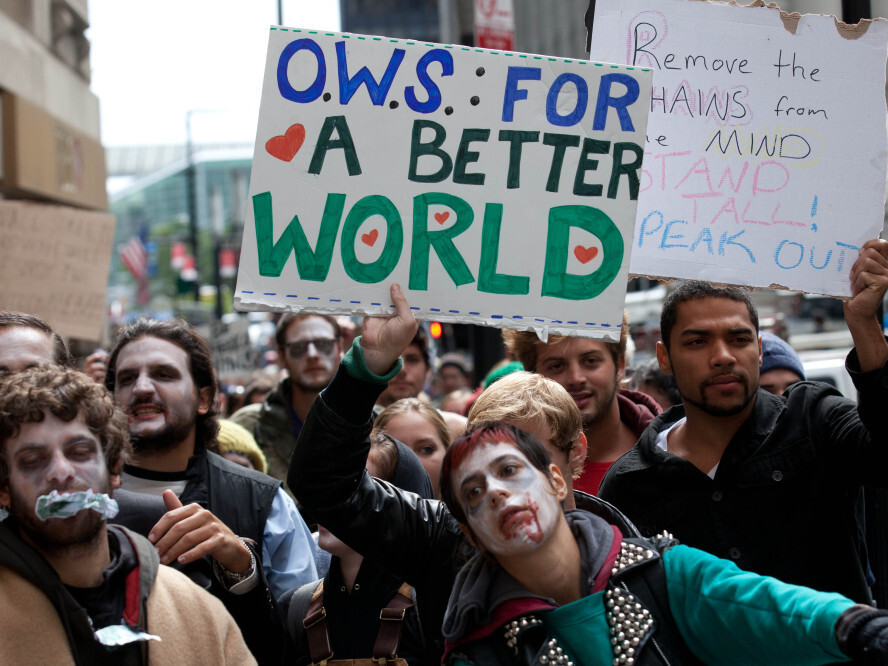 The zombie agenda is just one of many issues and philosophies animating these protesters, who've eaten and slept in Lower Manhattan's Zuccotti Park for more than two weeks now. If you ask them what exactly they're protesting against, you get a lot of different answers. But some themes do emerge.

"Corporations are screwing everybody — excuse the language," says Joanne Fiorito, who drove from Pennsylvania to support the protesters. "I think [the protesters] want to stop corporate greed. The money is not trickling down to we the people. If it was, there wouldn't be these people here."

If that seems like a pretty big umbrella, it is, says protester Caitlyn Leigh.

"It's a very diverse group of people who want very diverse groups of things. And so to be able to pinpoint one specific thing that everyone wants is extremely difficult, and will take a very long time," Leigh says.

But the protesters have the media's attention right now. Over the weekend, 700 of them were arrested for blocking the roadway of the Brooklyn Bridge. Protesters say they were entrapped by the cops, though police released a video that appears to show them warning the crowd to disperse.

Similar "Occupation" protests are popping up around the country in cities like Chicago and Boston. In downtown Los Angeles, a few dozen protesters are gathered outside City Hall. Sarah McGovern says she plans to stay there until December.

"There's not liberty for us. There's no education, no health care. We don't have equality. Equal rights are kind of a joke at this point. If you're rich, you're rich. And if you're not, good luck," McGovern says.

The protesters say they're staying put until the message — whatever it is — gets through.