Accessibility links
Greek Youth Face Tough Choices The financial crisis gripping Greece is having a major impact on the country's young people. A two-tier labor market that favors the older generation and draconian austerity measures have triggered a record high jobless rate among those under 35. 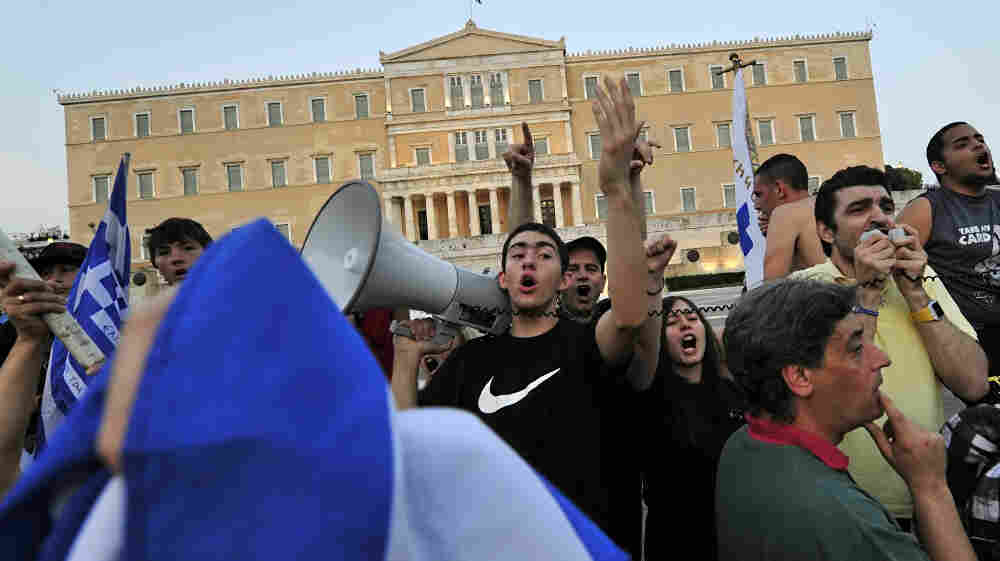 In June, youth demonstrators in Greece protested against the country's new austerity package. The package was passed as a condition set by the European Union and IMF for release of a bailout to help Greece's ailing economy. 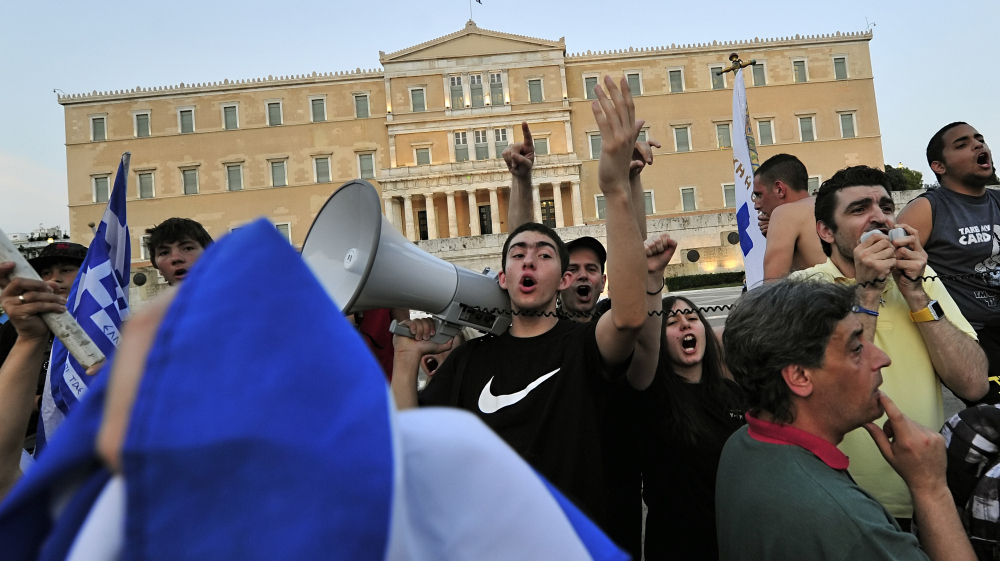 In June, youth demonstrators in Greece protested against the country's new austerity package. The package was passed as a condition set by the European Union and IMF for release of a bailout to help Greece's ailing economy.

The financial crisis gripping Greece is having a major impact on the country's young people. A two-tier labor market that favors the older generation and draconian austerity measures have triggered a record high jobless rate among those under 35.

And now, the economic upheaval is undermining the traditional family structure and pushing the young to leave their homeland for better prospects.

On a recent Saturday night in a pub in trendy Monastiraki, a group of 20-somethings held a going-away party for a young doctor who has found a job abroad. His friends don't feel so lucky.

"The general feeling is that the future does not depend on us," says Joanna Zahari-oudaki, a 31-year-old who gives private English lessons. She says she feels stuck and just tries to survive. "I try to imagine myself one month from now; I don't know what the answer is because every month, every day, we hear different things."

Zahari-oudaki says nothing changes and it doesn't feel like Greece is a democracy anymore.

Youth unemployment in Greece is running at 40 percent, one of the highest rates in Europe, and rising, as the economy rapidly shrinks. While the government is laying off middle-aged workers in the inflated civil service, the country of 11 million people last year lost 200,000 jobs in the private sector — where many young Greeks seek opportunities.

It wasn't easy even before the crisis hit, when the young used to be called the "700 generation." That label stood for a monthly salary of 700 euros, which is less than $1,000. Now, they're lucky if they make 500 euros, and they are rapidly disappearing from the labor market.

Unemployment offices in Greece are crowded, mostly with young people. George Koklas, 28, just got laid off from his job as a driver and bodyguard at the Finance Ministry. Previously, he worked with his father as a house painter — a skill he believes is useful anywhere. 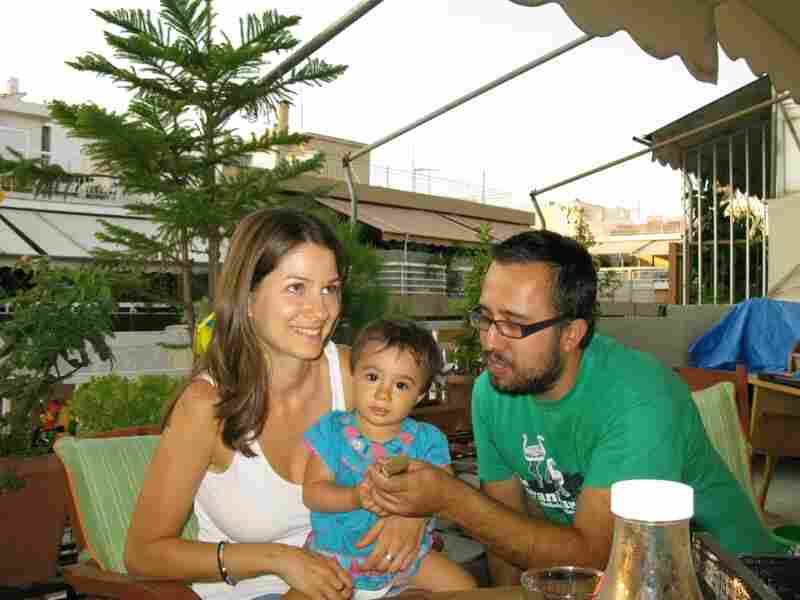 Stella Kasdagli, 30, and her husband Alexandros Karamalikis, 35, are trying to make ends meet. Karamalikis lost his job and and is now a stay-at-home father, raising their 13-month-old daughter 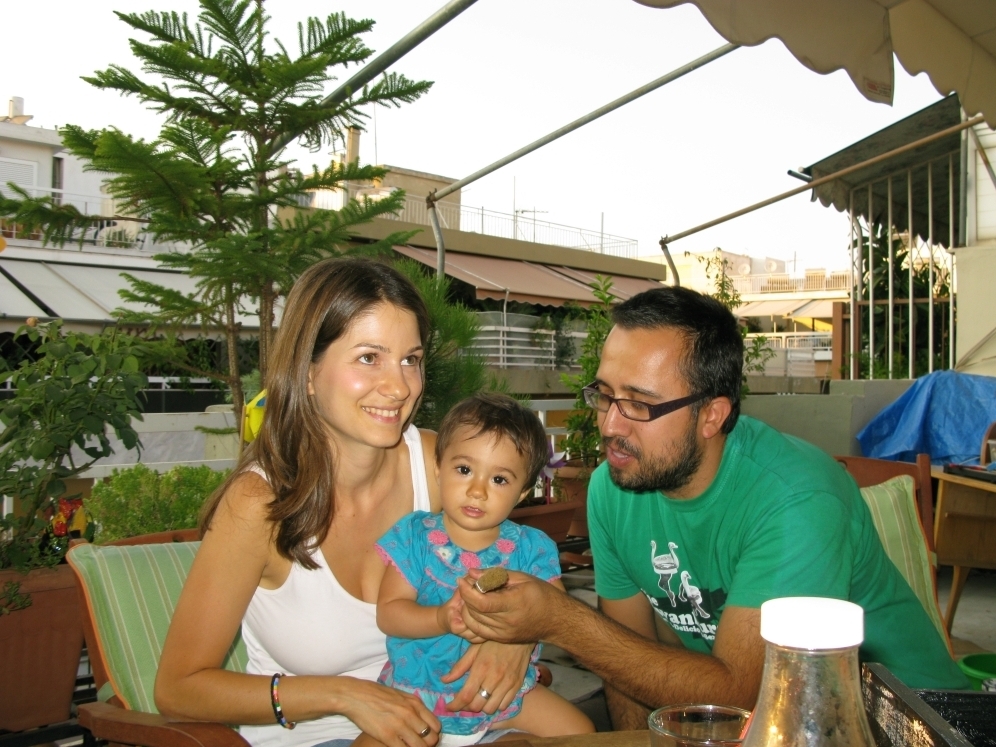 Stella Kasdagli, 30, and her husband Alexandros Karamalikis, 35, are trying to make ends meet. Karamalikis lost his job and and is now a stay-at-home father, raising their 13-month-old daughter

Koklas has already put the word out on the international Greek grapevine and hopes to go to the U.S. or Australia.

"The only thing left for us is to quit the country and to immigrate to another country," Koklas says. "I will feel very bad for my relatives, for my family, [but] not for my country. My country now is a big disgrace."

Greece's large and growing pool of skilled as well as unskilled workers is attracting headhunters from abroad. The Australian Embassy in Athens is already organizing work fairs in search of doctors and dentists as well as plumbers and home care workers. Even Germany is putting out feelers for doctors and engineers.

But in a country where family ties are intense, the No. 1 topic anguishing the Greek household is: Should the kids stay at home or seek their fortunes abroad?

Despina Papadopoulou, who teaches social sciences at Athens University, says the economic crisis is having a radical impact on one of the traditional pillars of Greek society: overprotective parents who coddle their children, promote their education and yet keep them at home well into adulthood.

"Now, you have one or even both parents who have lost their jobs," Papadopoulou says. "This is undermining fundamental family relationships. They're exploding, not because of a change in peoples' outlook but because social and economic conditions inside the family have changed."

The best-educated generation in Greek history has had the rug pulled out from under its feet.

Lidia Manca comes from a middle-class family and studies accounting and finance at Athens University. Her father, an engineer, recently lost his job, and Manca says she feels at a loss.

"I never thought before of leaving Greece and going out to find a job," Manca says. "But I think I have no future here. All of us studied hard, we got into a good university in Athens and now it just means nothing."

But some young people still have a clear aim in sight, and that doesn't include leaving Greece.

Now that the government is slashing funds for education, students from mostly low-income families who got into college through high entrance exam scores and good scholarships are staging protests and occupying buildings.

Evangelia Angehlina is a medical student who wants to be a surgeon. Her father is a plumber and her mother is a cleaning woman; she has no intention of leaving Greece.

"I want to fight here with other people to change this situation and have a future in our country," Angehlina says.

In the middle-class neighborhood of Elinorosson, 30-year-old Stella Kasdagli and her 35-year-old husband, Alexandros Karamalikis, are trying to make ends meet.

Kasdagli, managing editor of a magazine, has had her wages cut and has to pay a slew of new taxes. Her husband lost his job as a record producer and is now a stay-at-home father, raising their 13-month-old daughter. He restores old pieces of furniture, which he tries to sell to friends.

The economic crisis is not only upsetting the family structure. It is also putting the spotlight on Greece's two-tier labor market, which includes older, full-time employees who have up to now enjoyed lifelong job security, and a second-class group of workers — mostly poorly paid young people with short-term contracts and few or no benefits.

George Kirtsos, a journalist and publisher, calls it a form of modern slavery. And he's not alone in thinking that the crisis could lead to some kind of uprising, led by the young, in what he calls a civil war among generations.

"Those who control the system that are in [their] 50s or 60s sent a bill of their own failure to the younger generation," Kirtsos says.