Accessibility links
Fossils Help Revive Newfoundland Fishing Area On the craggy bluffs of Mistaken Point in Newfoundland, wind and waves are licking away rocks to reveal the oldest animal fossils on Earth. The creatures are an economic engine for a suffering area. 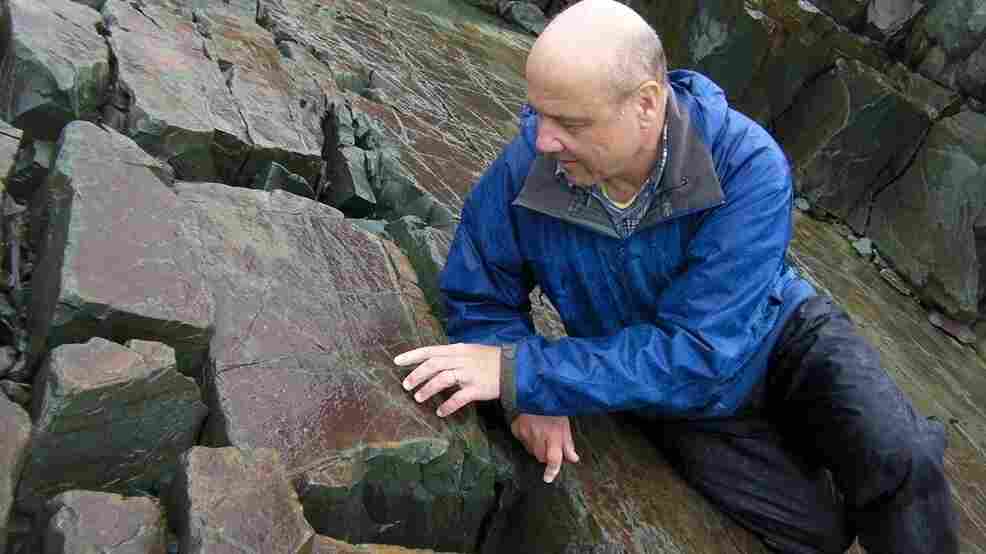 Guy Narbonne, a paleontologist at Queen's University in Ontario, inspects a fossil at the Mistaken Point Ecological Reserve in Newfoundland. It is filled with half-a-billion-year-old treasures like this one.

Sometimes the solution to a new problem is right in front of you — or, in the case of one community in Newfoundland, right under their feet. That's where residents, who partnered with paleontologists, discovered that fossils could serve as engines for tourism — and scientific research — in an area that had hit tough times.

The fishery in Portugal Cove South in southern Newfoundland collapsed in the early 1990s, and a resulting moratorium on cod fishing ricocheted through this community. "Enrollment in school has declined. Supermarkets closed. There's nothing here. People were afraid. They didn't know what was going to happen," says Charlene Powers, whose family has fished cod here for generations. "We watched our community go downhill."

Almost half of the nearly 400 residents in the area moved away and never came back. Kit Ward, a retired schoolteacher when the fishery collapsed, said she was determined to keep her community intact. So she teamed up with a few friends to promote a couple of local attractions, including a fossil site, "which we knew was important," she says.

They didn't quite know just how important. Ward spoke with a couple of paleontologists doing research in the area, at a site called Mistaken Point, and it turned out that the fossils are from the first complex animals that appeared on our planet during the Ediacaran period — that is, more than half a billion years ago.

"On talking to them, we saw, oh, gosh, we only had a surface knowledge. So this could be big. Wow. And it's right here on our doorstep," Ward says.

About a five-minute drive from Ward's house is the Mistaken Point Ecological Reserve. This part of the Newfoundland coastline is jagged, and it's littered with dark, hulking boulders. Several flat reddish slabs of rock — each the size of a tennis court — angle straight up out of the water.

"We are standing on a 580-million-year-old sea bottom," says Guy Narbonne, a paleontologist at Queen's University in Ontario. He stoops down to point out a treasure of a fossil. It looks like a long fern frond, but it's not a plant. It's an animal that lived on the bottom of the ocean where there wasn't any light. 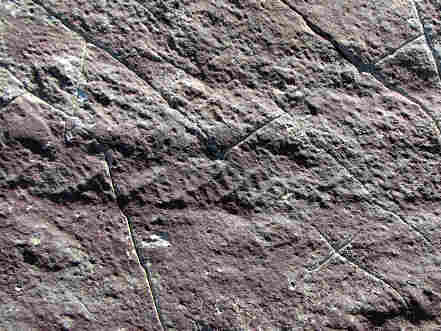 Look closely. See a horizontal ridge running through the middle of the photo? That's a close-up of a fossil of the oldest and largest multicellular creature on Earth.

Narbonne runs his finger along the length of the fossil, a distance that's about equal to his height.

"We're looking at, bar none, the oldest large multicellular creature on Earth," he says. And these creatures are drawing a crowd.

Narbonne has become part of some significant economic development in the area, and he says it's as gratifying as all the science he's done here. Proof of this success is at the nearby Trepassey Motel and Lodge. They've got 15 rooms and can seat up to 60 for meals.

Mary Devereaux, the motel's co-owner and manager, says that when they first opened 20 years ago, most of their business came from the people connected to the fishery. "The bleakest time was immediately after the cod moratorium, when we could've shut our doors," she says.

They managed to stay open — barely — and today business is good again. A resurgence in the fishery — this time it's crabbing — has helped. The fossils are playing a big role, too.

"We often say, 'What brought you here?' And 30 to 40 percent of the time, it's the fossils of Mistaken Point," Devereaux says. And the fossils have created jobs. Informal estimates suggest about a quarter of the jobs in the area now stem directly or indirectly from the reserve.

We're looking at, bar none, the oldest large multicellular creature on Earth.

Sarah Tweedt, a graduate student in paleontology at the University of Maryland, spent several nights at the Trepassey Motel and Lodge. She made sure to visit the fossils of Mistaken Point.

"Fossils are representatives of the history of life, and that's a heritage to which we all belong. Mistaken Point is a shining example of how sharing that history actively can help rebuild and support a community," Tweedt says.

Newfoundland's Mistaken Point is now a contender for UNESCO World Heritage status. It's a claim that everyone — locals, tourists and scientists — are all rooting for.

This story comes from the audio series One Species at a Time, which is produced for the Encyclopedia of Life. The series is produced by Atlantic Public Media, and this piece received support from the NASA Astrobiology Institute.