Accessibility links
Obama, Banks Trade Fire In Debit-Card Debate President Obama dived into the controversy over Bank of America's plan to start charging a monthly $5 fee for the use of its debit card, suggesting the bank is mistreating its customers. For its part, the bank says the new fee is designed to recoup the billions of dollars it is losing as a result of a consumer protection law. 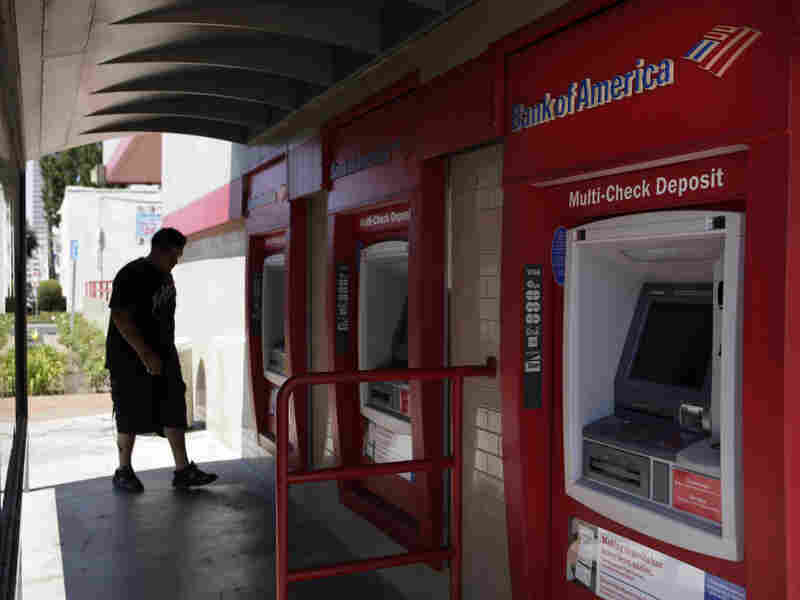 A man walks up to an ATM outside a Bank of America branch in Los Angeles. Bank of America has said it will charge customers a $5 monthly fee to use its debit card — a plan that has set off grumbling from consumer advocates at the highest levels. 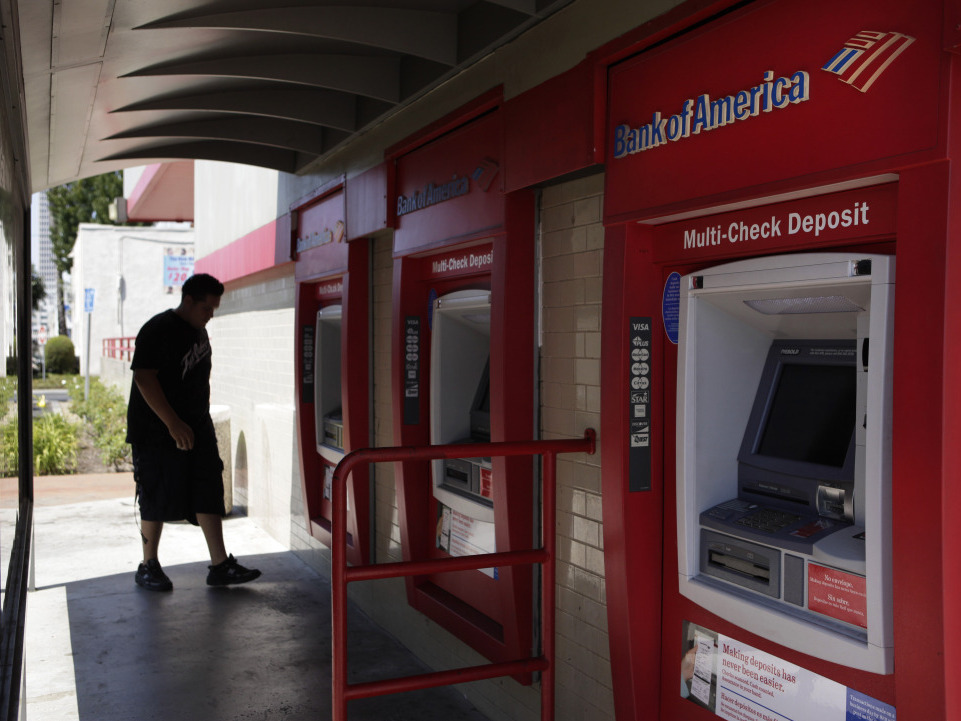 A man walks up to an ATM outside a Bank of America branch in Los Angeles. Bank of America has said it will charge customers a $5 monthly fee to use its debit card — a plan that has set off grumbling from consumer advocates at the highest levels.

President Obama has waded into the controversy over bank-card fees, suggesting that Bank of America is mistreating its customers with a plan to start charging a $5 monthly fee for the use of its debit card.

In an interview Monday with ABC, the president seemed to suggest the fee could become a target for the federal government's new financial watchdog agency.

"This is exactly why we need this Consumer [Financial] Protection Bureau that we set up, that is ready to go," he said.

Bank of America announced its new fee last week in a direct and very public response to the law that set up the Consumer Protection Bureau. One part of that law — known as the Durbin Amendment — caps the hidden fees that banks were already charging retailers anytime a customer uses a debit card.

Bank of America said in a statement that the loss of those fees is costing it billions of dollars a year, and that the new fee is designed to recoup some of that. Nessa Feddis, vice president of the American Bankers Association, says that so long as the Durbin Amendment is in place, Bank of America won't be the only bank to experiment with additional charges.

When the government intrudes and imposes price controls, the natural response is for any business to find a way to replace that lost income.

"When the government intrudes and imposes price controls, the natural response is for any business to find a way to replace that lost income," she says. "And that's what we're seeing with the Durbin Amendment."

It's doubtful the new Consumer Protection Bureau has the authority to actually stop Bank of America or any other bank from charging the new fee. But Obama argued the banks should reconsider.

"If you say to the banks, 'You don't have some inherent right just to get a certain amount of profit if your customers are being mistreated, that you have to treat them fairly and transparently,' he said, "my hope is you're going to see a bunch of the banks who say to themselves, 'You know what? This is actually not a good business practice.' "

Illinois Sen. Dick Durbin, whose amendment limited the old, invisible fee, was more blunt in his advice for customers who want to avoid any additional charges.

"Bank of America customers, vote with your feet," he said. "Get the heck out of that bank. Find yourself a bank or credit union that won't gouge you for $5 a month, and still will give you a debit card that you can use every single day."

But that may be easier said than done. Jean Ann Fox of the Consumer Federation of America says customers who rely on direct deposit or electronic bill-paying services may find it harder to switch banks.

"There is effort involved in closing one account and opening another one. And I think banks have counted on how much trouble that is, and that that would be a disincentive for you to switch accounts."

Some banks even charge an account-closing fee, which Fox likens to the cost of a "bank divorce." Still, she says this is a good time for consumers to review the cost of their banking habits and possibly rethink the way they use debit cards. Here, the new Consumer Protection Bureau does have the power to help, by making it easier for bank customers to comparison-shop.

"If the federal government's not going to cap fees or set specific prices on accounts, then we have to make sure that the competitive market really works," she says. "And that means easy-to-get information for consumers on what bank accounts cost."

Fox says Bank of America deserves credit for at least being transparent about its new debit-card fee, so customers can make an informed choice — even if the price of that transparency is criticism from the highest levels of government.