Accessibility links
Steve Jobs, Poet Of Computer World, Dies Long before the MacBook and the iPad, the Apple co-founder and former CEO dreamed that computers could be used to help unleash human creativity. He spent much of his life bringing that dream to fruition.

Steve Jobs — the man who brought us the iPhone, the iPod and the iMac — has died. The co-founder of Apple was 56 years old. Jobs had been battling a rare form of pancreatic cancer for years.

"It boggles the mind to think of all the things that Steve Jobs did," says Silicon Valley venture capitalist Roger McNamee, who worked with Jobs.

Apple has lost a visionary and creative genius, and the world has lost an amazing human being. Those of us who have been fortunate enough to know and work with Steve have lost a dear friend and an inspiring mentor. Steve leaves behind a company that only he could have built, and his spirit will forever be the foundation of Apple.

McNamee says that in addition to introducing us to desktop publishing and computer animated movies, Jobs should be credited with creating the first commercially successful computer.

"Any one of those would have qualified him as one of the great executives in American history," McNamee says, "the sum of which put him in a place where no one else has ever been before. To me he is of his era what Thomas Edison was to the beginning of the 20th century."

Jobs was just 21 when he co-founded Apple Computer in his garage in Los Altos, Calif., in 1976. The following year, when Jobs and his partner, Steve Wozniak, released the compact Apple II, most computers were big enough to fill a university basement or came from do-it-yourself kits for hobbyists with soldering irons.

With sound and cutting-edge color graphics, Apple II was the first blockbuster desktop computer. Users could hook it up to their TV sets to play games, and its spreadsheet program made it popular with small businesses.

"It made Apple the biggest computer manufacturer in the nascent computer industry," says Leander Kahney, author of Inside Steve's Brain.

But in 1981, Apple got its first taste of serious competition, when IBM released its own personal computer. IBM had the advantage of a well-known, trusted name, and Jobs — a California boy — loathed the kind of conformist East Coast culture it represented.

So he countered with the Macintosh, the first computer to feature a mouse, pull-down menus and icons — thus eliminating the command-line interface.

TIMELINE: The Man At Apple's Core

"Jobs' idea was that we'll make it easy enough that anybody can do it ... a grandmother, a kid, people who don't have any experience," Kahney says. The Mac was an example of the kind of product that would come to define Jobs' entire career: easy-to-use computers.

That's the message Jobs sent to millions when he released the Mac in 1984. In an ad that aired once during the Super Bowl, a woman dressed in brightly colored shorts runs into a room of gray-looking people and throws a sledgehammer at a screen where Big Brother — read IBM — is talking. The minute-long reference to George Orwell's 1984 became one of the most famous television commercials of all time.

It also illustrated Jobs' belief that computers were tools to unleash human creativity. In an interview for the 1996 PBS documentary Triumph of the Nerds, Jobs said, "Part of what made the Macintosh great was that the people working on it were musicians and poets and artists and zoologists and historians who also happened to be the best computer scientists in the world."

In many ways Jobs was the poet of the computer world. He'd gone to India and become a Buddhist. He took LSD and believed it had opened his mind to new ways of thinking.

But Jobs' iconoclastic ideals did not always make him easy to work with.

"He was just a terrible manager and a terrible executive," says Trip Hawkins, the marketing director of Apple until 1982. "At that point in time I never really thought that he could be a CEO." 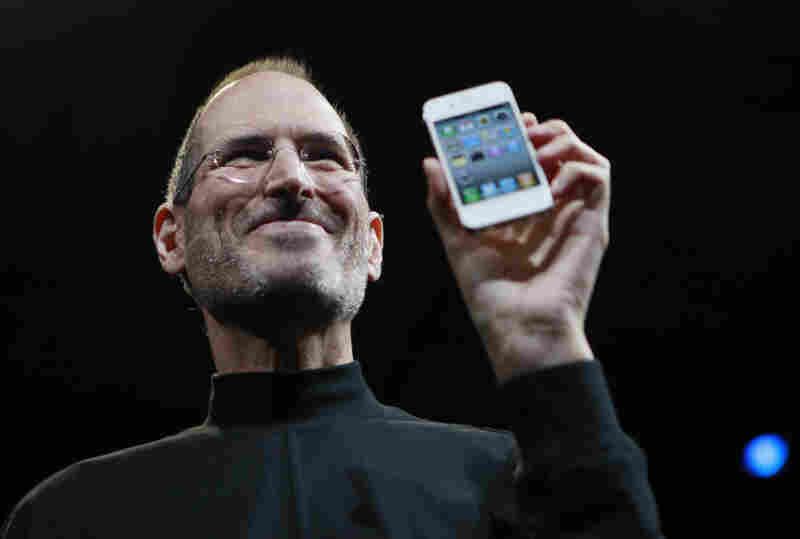 Steve Jobs holds up an iPhone at the Apple Worldwide Developers Conference in San Francisco in June 2010. 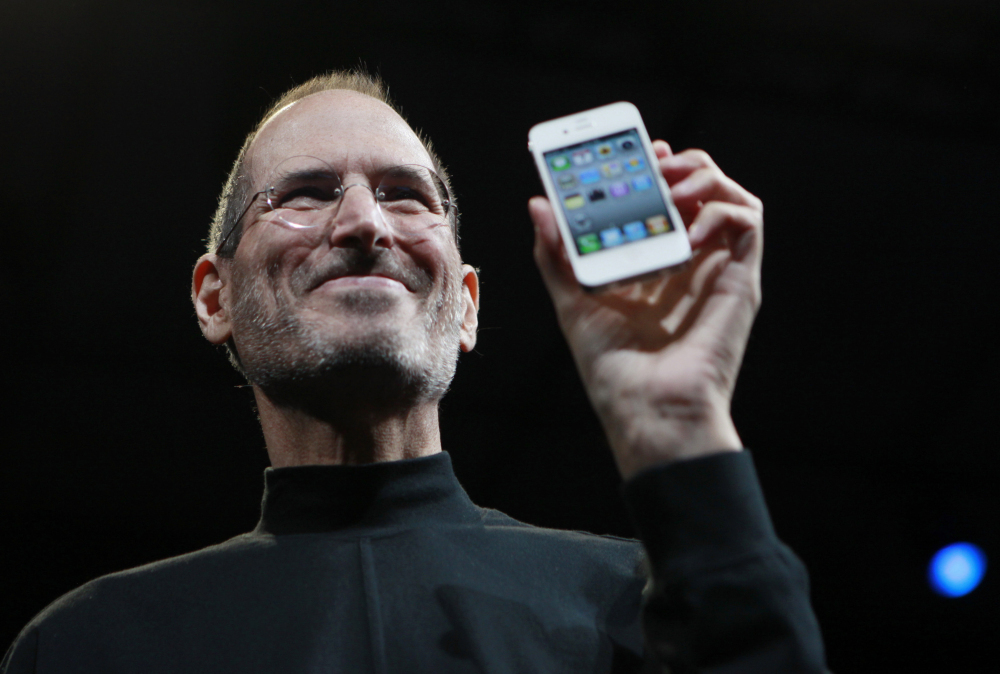 Steve Jobs holds up an iPhone at the Apple Worldwide Developers Conference in San Francisco in June 2010.

Jobs was eventually fired in a 1985 boardroom coup led by John Sculley — the man Jobs himself had hired to be CEO of Apple. But Jobs was driven to make computers vehicles for creativity, and after he left Apple, he purchased a little-known division of Lucas film and renamed it Pixar.

In 1995, Pixar released the first animated feature to be done entirely on computers. That film, Toy Story, was a huge success, and Pixar followed it with other big hits including Monsters, Inc., The Incredibles and Finding Nemo.

But Apple didn't exactly thrive in the years after Jobs' departure. With less than 5 percent of the computer market in its possession and analysts predicting the company's demise, the board invited Jobs to come back and run his old business.

In 1998, as interim CEO of Apple, Jobs introduced the iMac and once again helped remake the computer industry. According to venture capitalist McNamee, the iMac was the first computer made to harness the creative potential of the Internet.

"The iMac reflected the transition of consumers from passive consumption of content to active creation of entertainment," McNamee says. "People could write their own blogs, make their own digital photographs and make their own movies. Apple made all the tools to make that easy and they did at a time when Microsoft just wasn't paying attention."

Three years after the iMac, Jobs announced Apple's expansion into the music industry with a breakthrough MP3 player — the iPod.

"This is not a speculative market," he said as he introduced the iPod in 2001. "It's a part of everyone's life. It's a very large target market all around the world."

The iPod was a classic Jobs product — easy to use and nice to look at. Apple sold tens of millions of iPods, and the iTunes store became the No. 1 music retailer.

Six years later, Apple released the iPhone — a device whose elegance and user friendliness blew other phone/music players out of the water.

In 2010, Apple created yet another groundbreaking device with the introduction of the iPad. With its color touch-screen, the tablet gave users the ability to surf the Web, send e-mail, watch videos and read e-books.

Book publishers weren't the only ones to embrace the new tablet. A host of magazines, newspapers and broadcast news organizations, including The New Yorker, The Wall Street Journal and NPR, created iPad-specific apps that helped showcase stories — and images — in a tabloid-style layout.

And in January 2011, Apple reached a milestone by surpassing 10 billion downloads from its App Store — a sign of just how popular the company's devices have become with consumers.

"Simplifying complexity is not simple," says Susan Rockrise, a creative director who worked with Jobs. "It is the greatest, greatest gift to have someone who has Steve's capabilities as an editor and a product designer edit the crap away so that you can focus on what you want to do."

Rockrise believes Jobs touched pretty much anyone who has ever clicked a mouse, sent a photo over the Internet, published a book from a home computer or enjoyed portable music or a computer-animated movie.

She says they all have Jobs to thank for making it happen.

Previous versions of this story incorrectly said that Apple Computer was founded in a garage in Cupertino, Calif. The garage was actually in Los Altos.