Accessibility links
Elbert Tuttle, Quiet Civil Rights 'Revolutionary' Few today know Elbert Tuttle's name, but for those interested in America's racial history, this engaging biography is a must. As chief judge of the federal appeals court covering the Deep South, it was Tuttle who ensured that the promise of Supreme Court desegregation rulings became a reality. 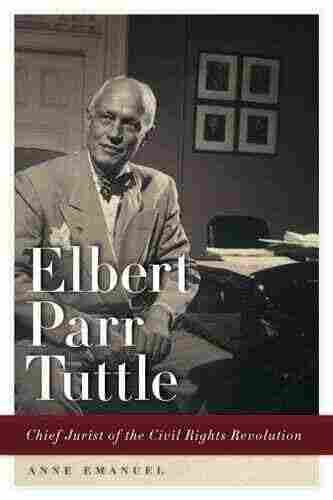 Few people in America today know the name Elbert Tuttle. But he was in some ways as much a central figure in the civil rights revolution of the 20th century as Thurgood Marshall and Martin Luther King Jr., for it was Tuttle who, as chief judge of the federal appeals court covering the Deep South, ensured that the promise of the Supreme Court's desegregation rulings became a reality.

In her thorough and engaging biography of Tuttle, Georgia State University law professor Anne Emanuel has documented Tuttle's extraordinary life. For those interested in America's racial history and transformation, this book is a must— a tour de force, covering not just Tuttle but the often violent times he lived in.

The legal landmarks we take for granted now were much more precarious at the time the Supreme Court was handing down its orders to desegregate Southern schools, hotels and transportation facilities. Without the actions of the Court of Appeals for the 5th Circuit, which then covered the states of Georgia, Alabama, Louisiana, Mississippi, Florida and Texas, those Supreme Court decrees could have ended up as little more than paper promises.

As Emanuel puts it, Tuttle's elevation to the top federal judicial spot on the 5th Circuit Court of Appeals in 1960 was a "remarkable and fortuitous accident of history."

Born in California, raised in Hawaii, Tuttle was a man who never shirked duty and had a backbone to match. Having served in World War I, he enlisted to serve in World War II at the age of 45, fought for five years, and was wounded in hand-to-hand combat on Okinawa. The Pacific wasn't the only place he faced danger. In 1931, as a captain in the National Guard, Tuttle was dispatched to Elberton, Ga., to help face down a lynch mob that threatened to dynamite the town jail where two black suspects were being held (read the entire episode).

As early as high school, Tuttle had harbored political ambitions, but when he married a Georgia girl and began practicing law there in the 1920s, there was only one political party, the white Democratic Party, segregated by law as well as practice. Tuttle refused to join, instead turning his energies to building a viable Republican Party. And in 1955 President Eisenhower appointed him to the Court of Appeals for the 5th Circuit.

Five years later, just weeks after he became chief judge of the appeals court, Tuttle "turned the tide of history," as author Emanuel observes, when two African-American students — including Charlayne Hunter, known to this generation as PBS and NPR correspondent Charlayne Hunter-Gault — sought entry to the all-white University of Georgia. When a lower court judge delayed his order to let them in, Tuttle ordered a hearing for the same afternoon and voided the delay, telling the state to admit the black students immediately. It was a harbinger of things to come. As chief judge of the appeals court from 1960-67, Tuttle, in Emanuel's words, "led the way in disarming the southern states of the most effective weapon in their arsenal — delay."

Reviled as a "judicial activist" by segregationists at the time and honored in the decades that followed, he would often say that the segregation cases were "the easiest cases I ever decided. The constitutional rights were so compelling, and the wrongs were so enormous."