Accessibility links
In Texas, Perry Has Little Say In 'Ultimate Justice' As the longest-serving governor of Texas, Rick Perry has overseen the application of the death penalty more than any other U.S. governor — 236 times, and counting. But Perry actually has little to do with the mechanics of capital punishment in his state. And, some criminal justice reformers say, he's anything but a hang-'em-high governor. 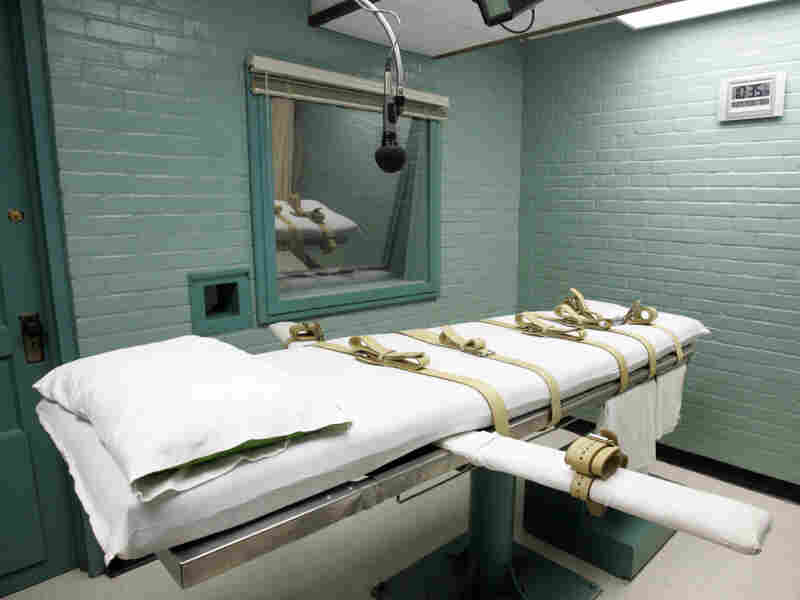 A microphone hangs over the gurney in the Texas death house in 2008 in Huntsville, Texas. 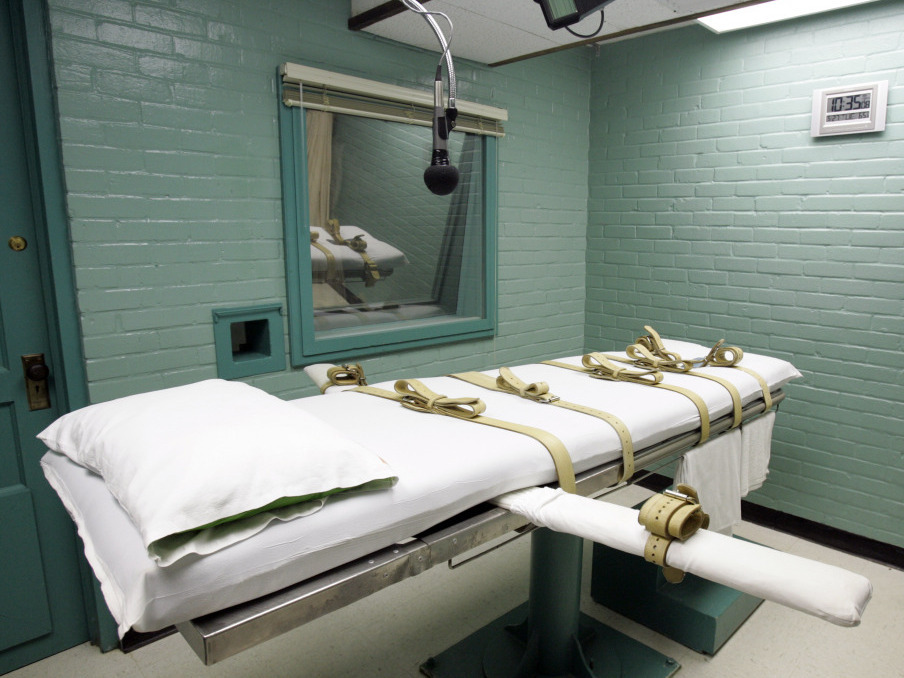 A microphone hangs over the gurney in the Texas death house in 2008 in Huntsville, Texas.

As the longest-serving governor of Texas, Rick Perry has overseen the application of the death penalty more than any other U.S. governor — 236 executions, and counting.

While Perry is unquestionably a steadfast supporter of capital punishment, his overall record on criminal justice is more complicated than that.

'The Train Runs On Its Own'

Inside the Texas Prison Museum, off Interstate 45 in the city of Huntsville, sits a stout oak chair, its varnish dull with age, fitted with thick leather straps.

"This is the Texas electric chair dubbed 'Old Sparky' by the inmates," says Jim Willett, a former warden and director of the prison museum. "In fact, the inmates referred to the execution as 'riding the thunderbolt.' "

Before the chair was retired in 1964, 361 convicts were put to death in it by judicial electrocution.

Capital Punishment In Texas And The U.S.

The U.S. Supreme Court reinstated the death penalty in 1976, after a 10-year moratorium. Since then, 1,271 people have been put to death across the country. In Texas alone, that number is 475. 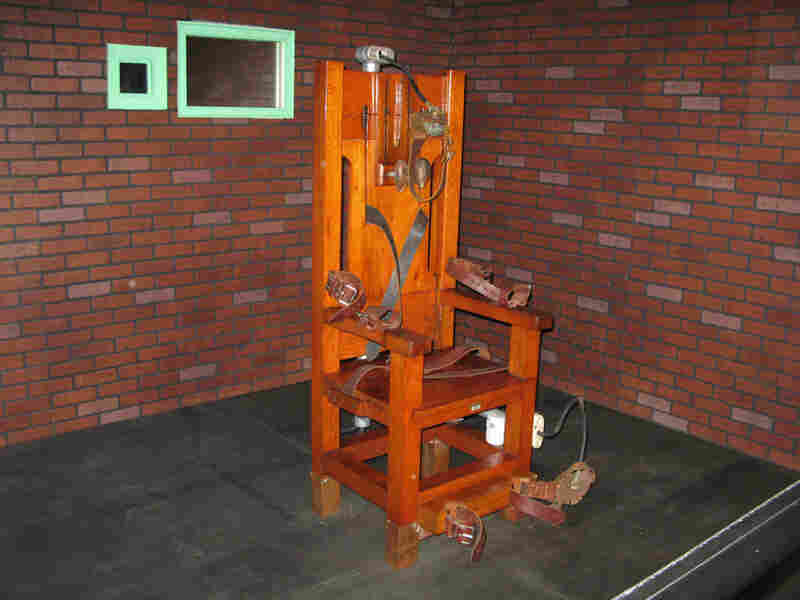 "Old Sparky," the decommissioned electric chair in which 361 prisoners were executed between 1924 and 1964, is now housed at the Texas Prison Museum in Huntsville. 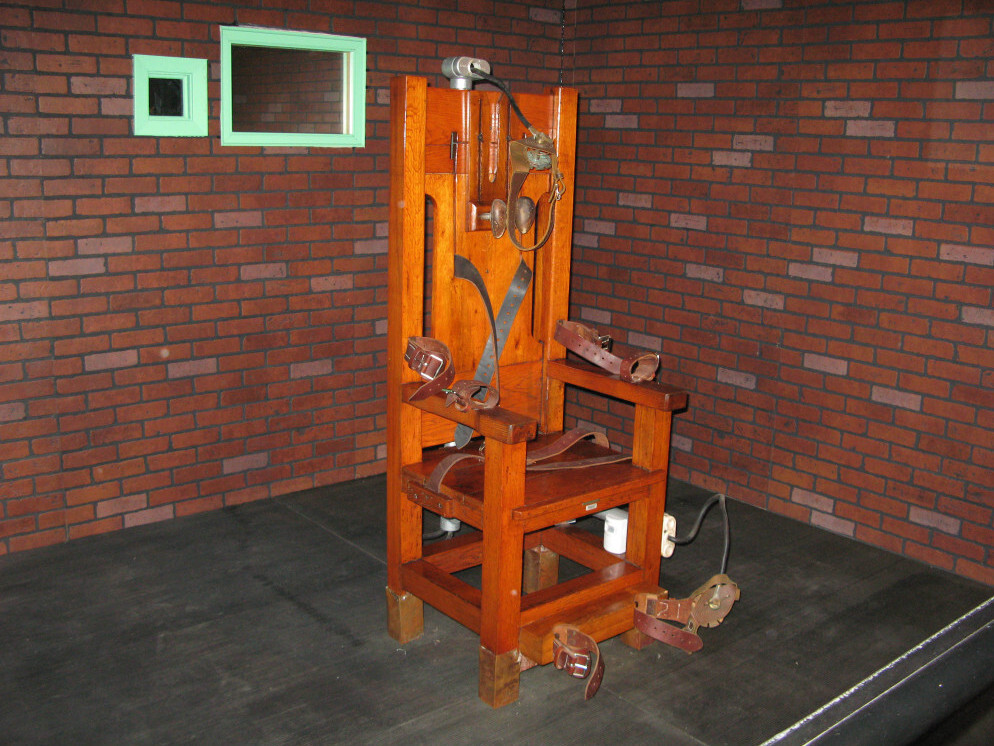 "Old Sparky," the decommissioned electric chair in which 361 prisoners were executed between 1924 and 1964, is now housed at the Texas Prison Museum in Huntsville.

"We get a lot of comments from people who think that we ought to put [this chair] back into use," says Willett, "that we ought to use that because it's too soft the way we put them to death these days."

It's often said the Texas governor "presides" over an execution, but that's inaccurate. He doesn't sign a death warrant or set an execution date, as in some states. In Texas, the only absolute power the governor has is to grant a single 30-day stay of execution.

"The train runs on its own," says Jordan Steiker, co-director of the Capital Punishment Center at the University of Texas Law School. "Execution dates will be scheduled. The attorney general's office and the local district attorneys will defend the death sentences. The governor's office basically doesn't have to do anything, and capital punishment will run in a robust way in Texas."

Perry commuted one death sentence to life in prison in his more than 10 years in office. George W. Bush granted one commutation. Democrat Ann Richards — a liberal icon — did not grant any.

Critics say Perry is a more passionate advocate for the death penalty than his predecessors, and that zeal has manifested itself in two controversial actions.

In 2001, he vetoed a bill that would have stopped executions of convicted murderers who are mentally retarded; the Supreme Court ruled the next year that executing mentally retarded criminals is cruel and unusual punishment.

And in 2009, Perry was criticized for suppressing a state investigation that was looking into whether bogus forensic evidence was used to convict a man for capital murder. Cameron Todd Willingham was put to death for setting a fire that killed his three young daughters. A damning new documentary, Incendiary, questions whether Texas executed an innocent man, and whether Perry did everything he could to make the Willingham case go away. 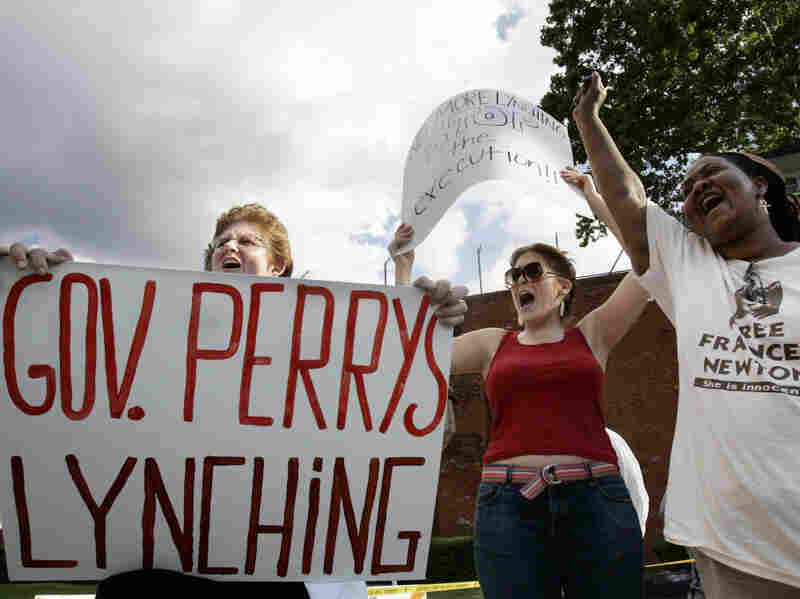 In 2005, death penalty opponents protest the impending execution of condemned inmate Frances Newton in Huntsville, Texas. Newton was convicted of killing her husband and two children in their Houston apartment. She was put to death by lethal injection on Sept. 14, 2005.

In a scene from the film, Perry says: "This is a very heinous crime that was committed by an individual who's been described by his own defense attorney as a monster."

But is that the end of the story — that Perry favors frontier justice?

There are criminal justice reformers in Texas who insist that Perry is anything but a hang-'em-high governor.

"I think Rick Perry is really getting a bum rap if and when he's being portrayed as some sort of bloodthirsty tyrant that just likes to kill people," says Jeff Blackburn, chief legal counsel for the Innocence Project of Texas, which works to overturn wrongful convictions.

"What we're accustomed to, frankly, is the governor's office being the primary obstructer of reform and progress, and that has not been the case with Rick Perry," he says. "He's done some real good, and I think more good than any other governor we've had."

I think Rick Perry is really getting a bum rap if and when he's being portrayed as some sort of bloodthirsty tyrant that just likes to kill people ... He's done some real good, and I think more good than any other governor we've had.

In fact, eight people were sent to death row last year in Texas, compared with 49 death sentences in 1994.

Criminal justice advocates won't go so far as to call Perry a reformer, and indeed, the governor has done little to exercise clemency in death penalty cases in which there are clear procedural flaws.

But to judge him solely on the 236 executions on his watch is unfair, says Scott Henson, who writes the respected criminal justice blog Grits for Breakfast.

"Capital punishment is a media fetish," he says. "It's not really something that stands out as a remarkable part of Rick Perry's criminal justice record."

Henson has a theory: Perry has so little to do with executions that he strains to take credit for them, knowing how popular capital punishment is with voters.

The audio of this story, as did a previous Web version, incorrectly says that in Texas, the only power the governor has is to grant a single 30-day reprieve, and only if the pardons board recommends it. The pardons board is not part of that process. Additionally, previous audio and Web versions incorrectly said that Texas Gov. Rick Perry has granted one stay of execution in his more than 10 years in office and that George W. Bush granted one. In fact, during his time in office Perry has commuted one death sentence to life in prison; Bush granted one commutation.