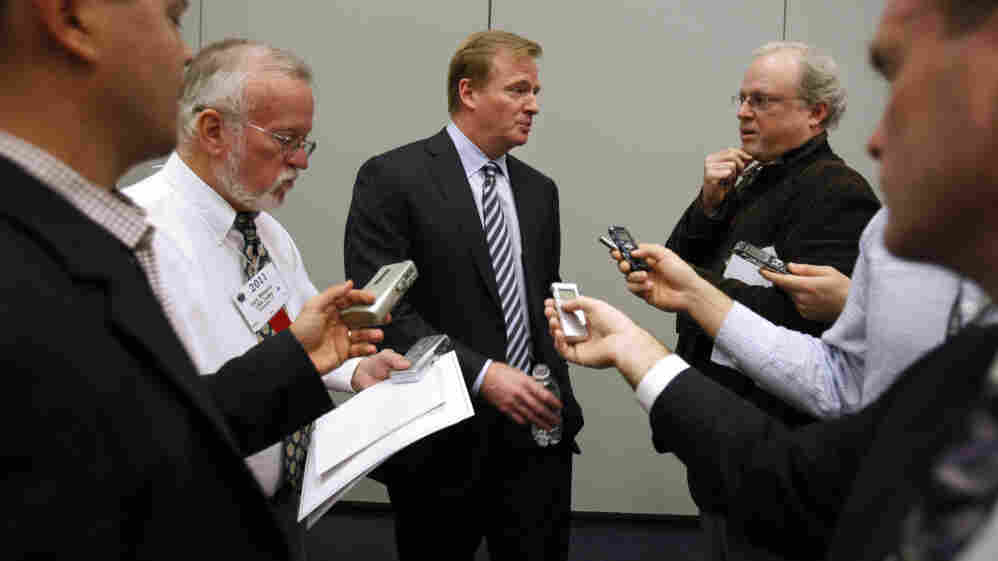 NFL Commissioner Roger Goodell answers questions from the media after speaking about concussions Monday at the Congress of Neurological Surgeons in Washington, D.C. 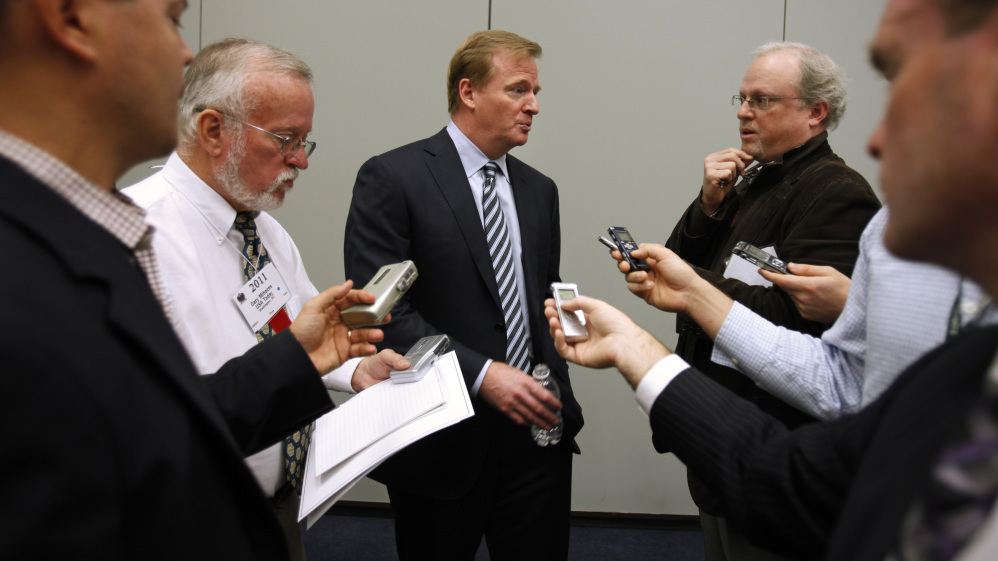 NFL Commissioner Roger Goodell answers questions from the media after speaking about concussions Monday at the Congress of Neurological Surgeons in Washington, D.C.

The NFL has taken numerous steps to make the game safer. Concussions have been big news, with awareness and concern about sport-related head injuries at an all-time high. One result of this — more companies promoting anti-concussion products.

An email from a company called Battle Sports Science last week said it was promoting a new football chin strap device called the Impact Indicator. The language was, to say the least, positive. The Impact Indicator can help "curb concussions" on the field, according to the email. This revolutionary product is the only one players can wear to help detect a possible head injury "before it's too late," it says.

This kind of language rankles Dave Halstead, technical adviser to the National Football League Player's Association and recently retired director of the Sports Biomechanics Impact Research Laboratory at the University of Tennessee.

"Anybody who sits down with you and says I have a device that if your child wears it will either diagnose a concussion or prevent a concussion is lying," Halstead says.

Halstead hasn't studied the Impact Indicator, which retails for $149, but he has heard what the chin strap device does, described in a sales video as having a sensor "designed to measure the force and duration of a hit and instantly indicate whether a hit has surpassed thresholds that are common to traumatic head injuries."

The indication of that hit comes when a light on the impact indicator turns green, meaning everything is OK. When it turns red, it means it's not OK.

"The fear here is, you have an individual who's received not much of an impact, but has had a significant rotational event," Halstead says. "They in fact have a significant mild traumatic brain injury. But they have a green light on the chin cup."

By rotational event, Halstead means the kind of concussion-inducing head movement, like whiplash, that doesn't involve a direct hit to the head. It's a harder head movement to measure, he says, especially on a chin strap.

Battle Sports Science CEO Chris Circo says his product does measure rotational movement as well as direct head impacts. Circo, who's had five concussions and takes anti-seizure medication, says he knows how complex brain injuries are. In an interview, he is more circumspect than his trumpet-like email to the media.

But, as advertised, it does help, says Circo. And despite Halstead's fear, Circo insists the red light goes on reliably — the way it did, he says, in a recent football game when an 11-year-old player took a hit and seemed fine. But the red light lit up and he was pulled from the game. Circo says the player was later diagnosed with a concussion.

"He would've kept playing had that light not gone off," Circo says. "And I can't imagine what could've happened to him."

Halstead says he used to get maybe one call a month from people wanting to test what he calls anti-concussion gizmos. Now it's once a week — helmets, mouth guards, head bands — even a pill. There's a hunger to produce and to consume.

"Families will come in and say, 'We got the concussion-proof helmet.' Now, that's their term," says Dr. Gerry Gioia, an expert on childhood concussions. "That may not be what the company necessarily said — that's how they've interpreted it, and I have to gently re-educate them about, 'Y'know there's no helmet yet that we know of that can do that.' "

For those products that say they can, New Mexico Sen. Tom Udall is watching. He has asked the Federal Trade Commission to investigate misleading safety claims about football helmets. Halstead says consumers need to ask about alleged anti-concussion products — how were they validated?

Still, Circo says no one should simply rely on the latest technology, including his. Parents, coaches and players, he says, simply have to be involved and aware when it comes to contact sports.