Accessibility links
Movie Review - 'Blackthorn' - It's Butch Cassidy, By Another Name Director Mateo Gil extends the Butch Cassidy saga with this tale of the outlaw's latter days; star Sam Shepard sells the story with a conflicted sense of remorse that pulls a folk hero down to earth.

'Blackthorn': Butch Cassidy, By Another Name

'Blackthorn': Butch Cassidy, By Another Name 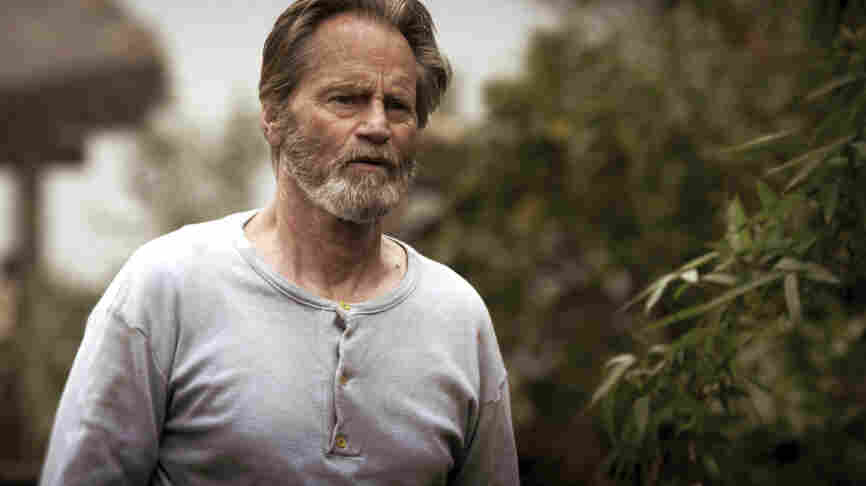 Butch Cassidy (Sam Shepard), living quietly in a Bolivian valley as James Blackthorn, dusts off his guns after he gets dragged into one final caper.

Rated R; For violence and language

From 'Blackthorn' - 'We Found Your Horse'

'We Found Your Horse'

"There are two moments in a man's life: When he leaves home, and when he returns." That's the theory of an aging Butch Cassidy in Blackthorn, and he spends the entirety of Mateo Gil's film desperately seeking that second moment.

The concept of "an aging Cassidy" might initially seem confusing — didn't we all watch Paul Newman getting gunned down at the end of Butch Cassidy and the Sundance Kid?

But that seminal 1969 movie is just one version of the infamous outlaw's story, and many believe reports of Cassidy's death in a Bolivian firefight were greatly exaggerated — and that he escaped to quietly live out his natural days.

In Gil's film, he's doing just that on a secluded ranch in Bolivia. He's calling himself James Blackthorn, living off the land and his savings from his old life, and carrying on a casual relationship with Yana (Magaly Solier), a local native woman.

Despite the relaxed bliss of this life, Cassidy feels the need to tie up a few loose ends. He has a grown son back in San Francisco, though they've never met. And after years away from his old life of crime, maybe he can go back to the U.S. without constantly looking over his shoulder. Fate has other notions.

It's on that trip, after withdrawing every cent he has from the bank and loading it up in his saddlebags, that he meets up with a bandit intent on stealing his horse. He thwarts the attempt, but the horse gallops off with all his money. Good thing the would-be horse thief, Eduardo (Eduardo Noriega), happens to have a massive sum hidden away, recently stolen from a mining company; Cassidy agrees to help him retrieve the cash — and get away from the posse that's after him — in exchange for half the haul.

Thus Blackthorn becomes, for a time, another "one last job" flick, albeit one with a dusty western spin. Cassidy is crotchety and resentful about being drawn back into a life of crime, but when it appears that he and Eduardo have gotten away clean, there's a sudden change in his demeanor that finds him happily singing old cowboy songs as they ride the trail to freedom. There's obviously a familiar old adrenaline rush that life on the ranch just wasn't providing.

Those rushes are few and far between though, and have dire consequences. Gil's film comes with many of the familiar trappings of classic westerns — shootouts, galloping horse chases — but its heart is of the meditative, elegiac school typical of the post-Unforgiven modern western. Nowhere is this more apparent than in the film's gorgeous centerpiece, a showdown on the bleak Bolivian salt flats high in the Andes. Here, the high altitude slows chases down to a trudge, with horses and their riders barely able to put one foot in front of the other.

These quietly evocative moments are the film's strongest, and mostly outweigh weaknesses like a slightly implausible plot turn that puts a disgraced (and excessively expository) Pinkerton agent (Stephen Rea) back on Cassidy's long-cold trail. There are some flashbacks to Cassidy's younger days, too, that feel entirely unnecessary.

Even if those weaknesses were more prominent, though, they'd be mostly forgivable in light of Sam Shepard's powerful performance in the title role. He perfectly blends the mischievousness of the character with the sadness of age and exile. His Cassidy is magnetic and intimidating, and his smoky, reedy voice conveys the dried-out fatigue of someone who has spent too long out under the unforgiving prairie sun.

The lines between Cassidy's honor and dignity and the more craven brand of thief represented by Eduardo may be a little too broadly drawn, as the film attempts to generate support for Cassidy's homeward-bound redemption. Shepard sells it with a depth and a conflicted sense of remorse that pulls this folk hero down to earth.