Accessibility links
This Time, Ellen DeGeneres Is 'Seriously' Kidding With her dogged optimism and goofy dance moves, there is something endlessly likeable about DeGeneres, and her personality jumps off every page. Seriously ... I'm Kidding is a mirthful celebrity memoir that manages to entertain without divulging juicy bits of gossip. 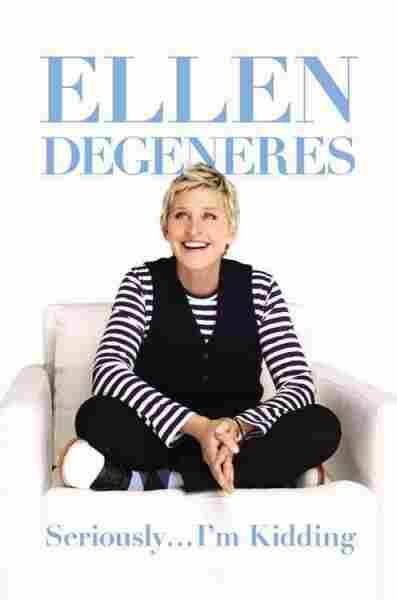 A lot has changed for Ellen DeGeneres since her first book, My Point ... And I Do Have One, was published in 1995. Really, what hasn't changed? Two years after that quip-filled memoir was released, DeGeneres came out on The Oprah Winfrey Show. It would be another eight years — years that included standup specials, TV guest spots and two sitcom cancellations — before she deservedly "made it." Her Emmy-winning, ratings-grabbing daytime talker The Ellen DeGeneres Show is now in its ninth season. She has hosted the Primetime Emmy Awards and the Oscars, spent one season as the nicest judge American Idol has ever seen, and has parlayed her ageless looks into a Cover Girl gig.

Seriously ... I'm Kidding is her third book, and the third to use ellipses in its title. The similarities don't end there. DeGeneres is a devotee of a loose and whimsical writing style that has readers feeling as if they're hanging out with the comedian as she wanders around her Beverly Hills home, trying to write a book.

That might sound like a knock, but it isn't. With her dogged optimism and goofy dance moves, there is something endlessly likable about DeGeneres, and her personality jumps off every page. Even her brief rants about everyday nuisances, like people multitasking while on the phone or showing up two hours late to a dinner party, carry a cheerful air.

There is evidence in Seriously ... that Team DeGeneres had the notion to turn this latest collection of lighthearted observations into an advice manual of sorts. This makes sense: DeGeneres is the heir apparent to Oprah's throne and a pioneering figure in the gay community. But she is also too self-effacing and fun-loving to pen an inspirational tell-all. The wisdom she does have to offer is implicit in her opinions of celebrity and the baggage that comes with it.

Take her approach to aging. "I don't know at what age people stop wanting to be older," the 53-year-old writes. "It must be around 40, when you're 'over the hill.' I don't even know what that means and why it's a bad thing. When I go hiking and I get over the hill, that means I'm past the hard part and there's a snack in my future."

DeGeneres is entrenched in celebrity culture, but that doesn't mean she's always happy with it. She pokes fun at some of the silliest aspects of our age- and appearance-obsessed nation. "How far will you take the season's hot shade of green?" she asks, quoting a celebrity tabloid survey. "What does that mean? What does it mean to take green 'all the way'? Like, to the prom?" One of the standout chapters in the book is another dig on fame, "Timeline of a Celebrity's Day," which begins: "10:00 a.m. — Gently woken up by houseboy Manuel. 10:00:07 a.m. — Quietly utter the word 'snooze,' letting Manuel know he is to return in nine minutes."

This is DeGeneres' cheeky response to our desire — and, these days, our expectation — that a celebrity memoir contain either presumptuous pointers on how to achieve happiness or juicy bits about what the author's life is really like. DeGeneres never goes there. A chapter titled "The Secret of Life" contains one word: "Kale." The most she'll say about her personal life is an endearing complaint about how her wife, the actress Portia de Rossi, owns far too many lotions. (She suggests combining them so de Rossi "can smell like a baby eating a cucumber in an orange grove.")

Of course, DeGeneres' talk show is a churning factory of celebrity fodder, where, in return for pimping their projects, guests are peppered with personal questions. But DeGeneres knows the power of the medium. Her coming out on Oprah was by precise design, and it's the perfect example of how a celebrity can put her high profile to good use.

Neither Seriously ... I'm Kidding nor DeGeneres' other best-sellers compromise her determination to share only what she wants, and that's refreshing. The celebrity conversation in this country may never cease, but DeGeneres is doing her part to give it some desperately needed dignity — and to make it more fun to listen to.