Accessibility links
Gadhafi May Be Hard To Find, But Not His Supporters By some estimates, up to 30 to 40 percent of Libya's population is sympathetic to ousted dictator Moammar Gadhafi. Tripoli's Abu Salim neighborhood provides a window into the potential problems the country faces in the wake of its brutal revolution. 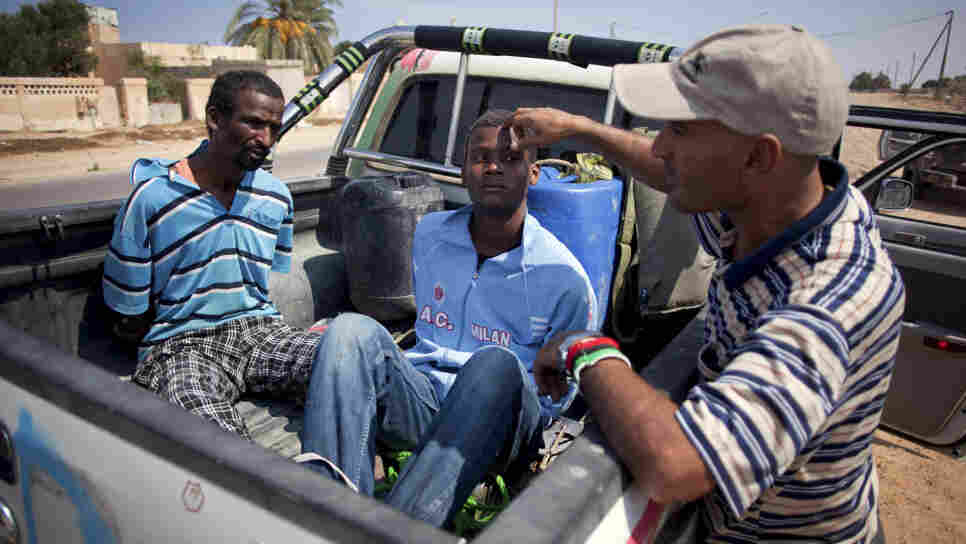 A revolutionary fighter watches over two suspected Gadhafi loyalists in Sirte, Libya, last month. By some estimates, up to 30 to 40 percent of Libyans are sympathetic to former dictator Moammar Gadhafi.

In Libya, anti-government fighters are facing fierce resistance in Moammar Gadhafi's hometown of Sirte. It's one of the last areas that has not fallen to rebel forces. But it's hardly the last bastion of support for the deposed leader.

On a busy afternoon in the market in the southern Tripoli neighborhood of Abu Salim, it doesn't take long for a man to approach a visiting reporter and say under his breath, "You know, we all support Gadhafi here."

Soon after, a crowd gathers and one of the young men gains confidence. His name is Anis, and he says he speaks for most people in Abu Salim. 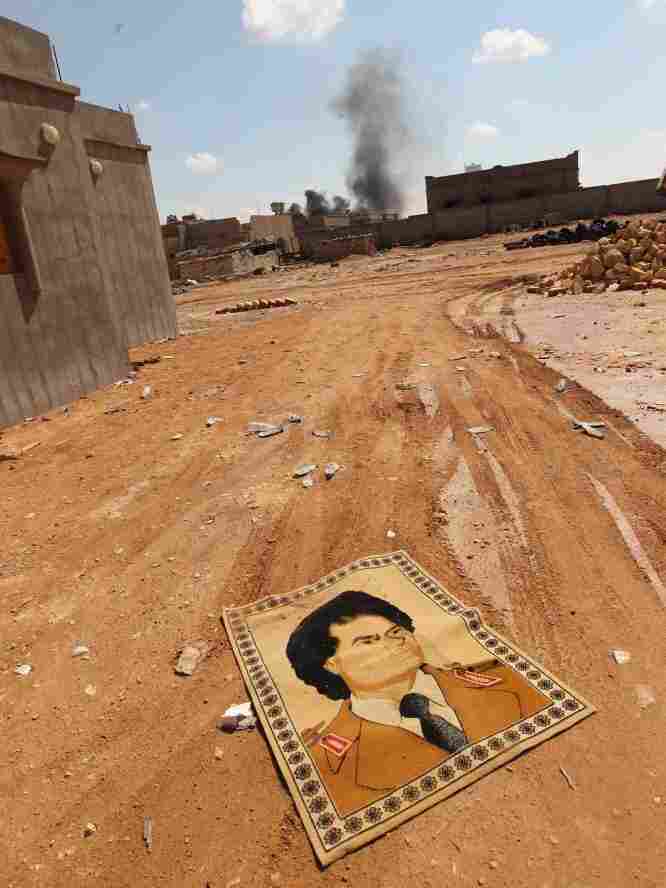 A small carpet with the portrait of Gadhafi lies on the ground near fighting at the front line of Bani Walid, southeast of Tripoli, earlier this month.

The last neighborhood in Tripoli to fall to rebel forces, Abu Salim has long been known as a hotbed of Gadhafi support. But it's not alone.

By some estimates, up to 30 to 40 percent of the population in Libya remains sympathetic to Gadhafi. And how that is playing out in a place like Abu Salim provides a window into the potential problems the country is facing in the aftermath of its brutal revolution.

But getting them to learn the anthem hasn't been easy.

Principal Fathia Ahmed says some children absolutely refused to take the printout of the anthem's lyrics when it was handed out.

And she says only about half of the students who should be at the school are there. Some parents are keeping their children home because they don't want them to learn the new revolutionary curriculum.

Ahmed herself is new to the job. The previous principal was too closely allied to the former regime, she says, and is taking what she delicately terms an extended "vacation."

She says most of the people in Abu Salim are extremely poor, and they worked for the government or the army, which helps explain their sympathies.

She says she's spent the better part of the first two weeks of school trying to undo 42 years of indoctrination, speaking well of the rebels and the revolution to her students and their parents.

But it will take more than that to change people's minds.

Gadhafi gave little to this downtrodden neighborhood. But it's still more than they are getting now in these chaotic early days after the revolution.

At the local Abu Salim council, a woman comes to ask for help. She has three children, her husband is out of work, and the fighting destroyed her house. The Gadhafi government allocated her new lodgings, but the regime fell before she could move into the new house. Now she doesn't know who to turn to for help.

Local council member Musbah Shawesh listens sympathetically but then sends her away.

"We are all volunteers here," he tells her. "We have no money and no power to grant housing."

Shawesh says that most of the people in Abu Salim can be brought over to support the new government if they see their lives improving.

"We have tried to give them food and other goodies to show that we can provide for them," he says.

"But it's a race against time. The longer there is no one to answer to people's needs," he concedes, "the better the former regime will look."

And there will, of course, always be people who love Gadhafi no matter what, he says.

What to do with them is something the new government hasn't quite figured out.

At a checkpoint in Abu Salim, two anti-Gadhafi fighters argue about what they would do if they spotted someone waving Gadhafi's green flag.

"It's a democracy," one of them says. "As long as they don't have a weapon, I would let them go on their way."

The other waves his gun and says he would shoot them dead.

Back at the market, Gadhafi supporter Anis says the new government should prove its democratic credentials.

"If this is real democracy," he says, "don't shut us up. Allow us to say what we really believe."