Accessibility links
New Republic: Why Liberals Have Tea Party Envy In the last few weeks, despite their lack of a platform and organization, the Occupy Wall Street protests have taken on a new life. The New Republic's Mark Schmitt asks, is this latest show of support the Left's response to the Tea Party movement? 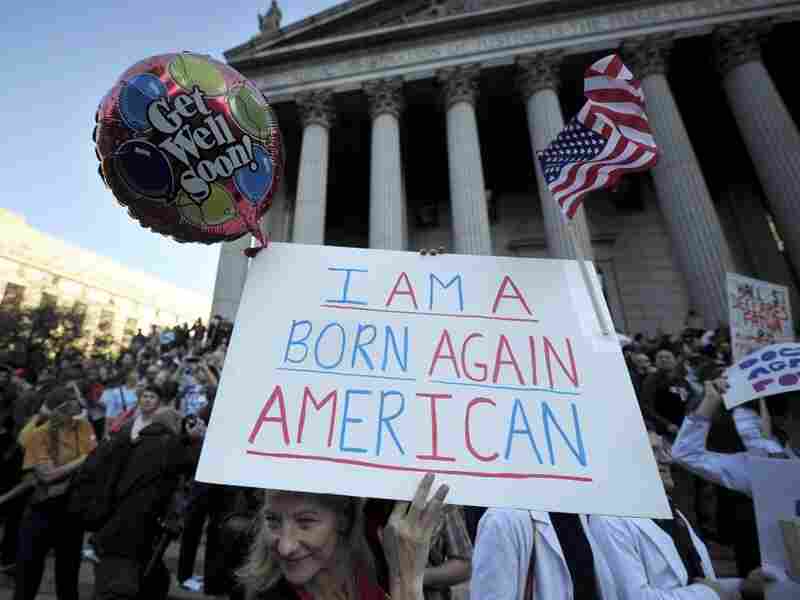 Union members and Occupy Wall Street protesters stage a protest near Wall Street on Oct. 5, 2011. The demonstrators are protesting bank bailouts, foreclosures and high unemployment from their encampment in the financial district of New York City.

See Another Opinion On The Wall Street Protests

Mark Schmitt is a senior fellow at the Roosevelt Institute and former editor of The American Prospect.

When the "Occupy Wall Street" protests began to attract notice last week, the initial reaction was to scoff at the "Trustafarian nitwits" who lacked leaders, spokespeople, a policy agenda, or even much of a philosophy beyond anarchy, its cousin minarchy, and drum circles.

And then, suddenly, everything changed. "OWS" was the video-conferenced toast of this week's "Take Back the American Dream" conference, embraced as the vanguard of Van Jones' new "Rebuild the Dream" initiative. Micah Sifry of TechPresident.org measured the movement's growth through "likes" on Facebook and found 232,000 allies, with growth on track to double every three days. Press coverage turned from mockery to admiration. And mainstream groups, including labor unions, MoveOn.org, and New York's highly effective Working Families Party headed down to Wall Street (which, ironically, is no longer the center of global finance, as the biggest firms have moved uptown) to lend the movement their leaders, spokespeople, and policy agendas. What happened? Once liberals stopped and took a long look at the motley protesters with funny signs, they began to see something they'd long envied with an irrational fervor: the Tea Party.

It wasn't just that OWS was the only thing happening. In fact, as David Dayen of Firedoglake has put it, Occupy Wall Street can be seen as one additional voice in "a longstanding movement of bank accountability," involving local protests in Los Angeles and elsewhere, the New Bottom Line project, which has become visible in the last few months, and others. This highly disorganized constellation of efforts includes the very moving "We Are The 99 Percent" blog on tumblr, and there's also a site called "The Other 98 Percent," which has almost 100,000 Facebook fans. (Perhaps they could join forces and compromise on 98.5 percent.) The most visible impact of these several efforts came just last week, when California Attorney General Kamala Harris opted out of the proposed comprehensive settlement with banks over foreclosure fraud, joining Eric Schneiderman of New York in pushing for a more aggressive investigation instead.

Perhaps the most interesting is National People's Action, a coalition of community organizations that has been leading well-targeted protests for at least four years and getting meetings with members of the Federal Reserve Board to press their demands. In the spring of last year, I came across several dozen decrepit yellow school busses parked in Rock Creek Park—they had brought NPA protesters to Washington, where they jammed the nearby front yards of bank lobbyists and the next day snarled traffic on K Street. It's not my style of politics, but strategically making bankers, lobbyists, and policy makers uncomfortable has gotten results. And most importantly, NPA represents the actual people affected most directly by the subprime and foreclosure crises—low-income people, working people aspiring to, but not yet settled into, the middle class.

While the NPA protests got some coverage, mostly on the DC traffic reports, they never received nearly the attention showered on OWS. Some of that is location and the rapid growth of the movement. But the turn from mockery to embrace by the popular media in a snap seems to have coincided with a sudden realization: Goofy costumes? Hand-scrawled signs making incoherent points? Haven't we seen this before? It's the Tea Party! E.J. Dionne of The Washington Post asked earlier this week, "Why hasn't there been a Tea Party on the left?," and here is the answer. Our Tea Party has come. And so all the good work and focused protests are tossed aside as liberals gravitate to the thing that looks and feels most like the early days of the Tea Party. Dayen is right that Occupy Wall Street fits into the general tenor of the other "bank accountability" efforts, but it feels like it's starting entirely from scratch, with little awareness of anything that came before it.

The Tea Party, too, started in incoherence and blind rage, disconnected from other conservative activism, and featuring an unappealing, self-indulgent cast of characters who, like the young activists on Wall Street, represented only a tiny faction of the people they claimed to speak for. But that made it also an open opportunity for Republican operatives like former House Republican Whip Dick Armey, now of the group FreedomWorks, to take it under their wing, civilize it, integrate it with the established far-right of the Republican Party, and acquire a new mailing list. The Tea Party of mid-2009, as seen in Dave Weigel's marvelous deadpan slideshows, is a far cry from the disciplined electoral force of 2010, which both pushed the Republican Party to the right and cost it a chance at taking control of the Senate.

If OWS looks sort of like a younger, dreadlocked version of the Tea Party, then maybe it's the thing that will evolve into a similar force, the mobilization from the left that Dionne was hoping for. This assumption continues a near-obsession on the left with the Tea Party, as if it were the only political movement that's ever been effective. Over the two years since the Tea Party emerged, liberals have tried to find common cause with it, reasoning that they're populists, we're populists, and maybe we could convince them to hate big corporations as much as they hate government. (Good luck with that.) And they've envied the Tea Party. Writer Naomi Wolf saw an ally not in policy positions, although she wrote that the groups were offering "proposals that were ahead of their time," but a life-force: "They were stepping up to the plate, when my own liberal privileged fellow demographic habituates were lying around whining." Like a teenager infatuated with Charles Bukowski, liberals assumed the Tea Party, with all its craziness, might just be the Real Thing. And its resemblance to that messy, fleshy Real Thing is what makes Occupy Wall Street more attractive than all the thoughtfully constructed protests that precede it.

As is so often the case, the left is so obsessed with the right that it overlooks its own achievements. The Tea Party is a fascinating phenomenon, especially in that it remained effective after being absorbed into the Republican Party establishment. (Compare that to Organizing for America, formerly Obama for America, which quickly suffocated in the warm embrace of the Democratic National Committee.) But it's hardly the only model for social change. The Civil Rights Movement, feminism, LGBT activism, the liberal Netroots of the 2004-2008 era—all had very different trajectories. They didn't begin with vaguely anarchic events. They didn't have narrowly defined policy goals designed to be passed in the next Congress. But they did have broad, achievable visions that could reach a broad swath of the 99 or 98 percent.

As fascinating as the spontaneous, unfocused energy of Occupy Wall Street is, and even if it's the only way to attract the attention of the media, in our obsession with finding "our Tea Party" liberals should not overlook the other work that's being done, not just by policy wonks at think tanks, but by many other activists and protesters who are not afraid to camp on some lobbyist's lawn. Occupy Wall Street might be part of a titillating new trend, but liberals shouldn't let their Tea Party-envy trick them into thinking it's an easy alternative to the hard inside-outside game of social transformation.