Accessibility links
Jobs' Greatest Legacy May Be Design Impact Steve Jobs, who died Wednesday, did not invent the computer, or the mouse, or the smartphone, or MP3 players. But it was his vision that made them accessible, user-friendly and enormously popular. 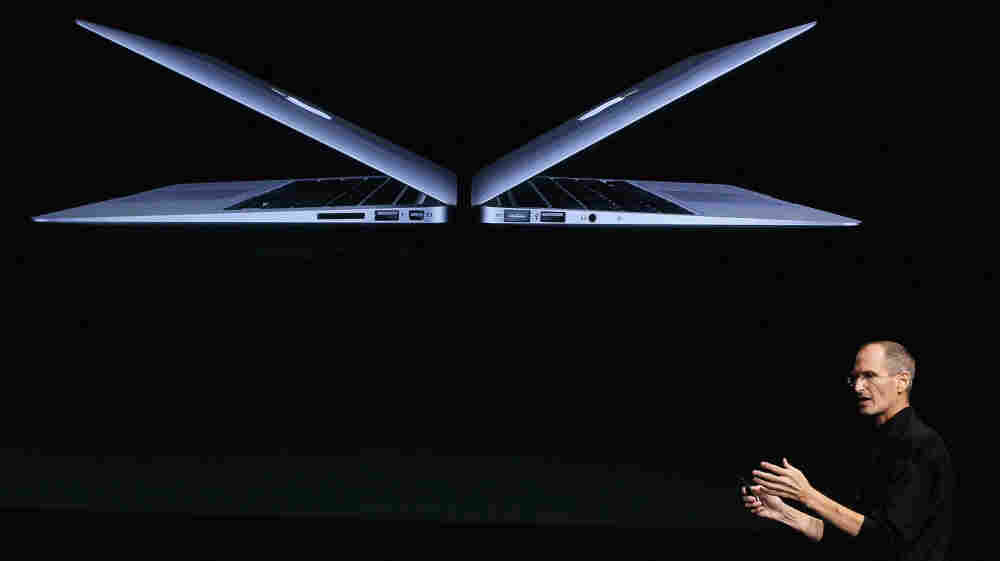 Steve Jobs introduces new MacBook Air models at Apple headquarters on Oct. 20, 2010. Some say one of his greatest legacies is his impact on design.

Steve Jobs, who died Wednesday at the age of 56, was obsessed with computers from an early age. In 1975, when he was 20, Jobs was part of the Homebrew Computer Club — a group of early computer enthusiasts obsessed with making computers more popular.

"People [would be] all together in a room, jostling, bubbling with ideas, bringing in new technology, new chips, new displays, new networks, new software, everything new," says John Gage, a former member of the club.

Gage says from the beginning, Jobs' talent was to see all that clutter and cut through it, "with the result, an elegant, simple, human usable device."

"That was Steve's genius," Gage says. "He saw clearly how to take this enormous complexity and make something a human being could use."

In 1984, Jobs introduced the first MacIntosh computer at the first MacWorld in front of an audience of thousands. Jobs lifted a cover and revealed a boxy computer with easy-to-read graphics.

The computer voice identified itself, said, "It sure is great to get out of that bag," and went on to poke fun at IBM computers.

"Never trust a computer you can't lift," it said. The MacIntosh had a mouse and graphical user interface — not the first computer to have them — but it was the first computer with those features that was commercially successful. The Mac made the computer a creative device for the average person.

"He brought music and art," Gage says. "He brought visual sensation. He brought capabilities to the computer that were not dreamed of by those that were at the lower levels of putting together the chips that would do the fast computation or store all the bits of a picture."

The Wisdom Of Steve Jobs

In 1985, Jobs was pushed out of Apple in a boardroom coup. But after he left, the company floundered. He returned in 1997 and stripped down the company the way he stripped down design — cutting out product lines.

Robert Brenner was at Apple during the time Jobs was gone. When he returned, Brenner says, he unleashed the power of the company's designers.

"There obviously is a culture and an environment there as a designer if you're good that will ... support you in doing great things," Brenner says.

In 1998, Apple introduced the iMac. It was one piece and a smash hit. In 2001, the iPod reshaped the idea of an MP3 player, with a simple user interface that had a wheel in the front that you could turn to scroll through all your songs in a little window.

Then in 2007, Apple entered the smartphone market. Jobs poked fun at the other phones and smartphones, and then he introduced the iPhone.

"What we want to do is make a leapfrog product that is way smarter than any mobile device has ever been and super easy to use," Jobs said at the time. "This is what iPhone is."

Brenner says Jobs was obsessed with making his products just right and using the best materials — not plated plastic, but real machined metal; not black plastic but glass. Brenner says Apple would build a new factory if that's what it took to make the product right.

"Very few companies would do that, say, 'Here's an object we believe needs to be made this way; let's go out and create an entire infrastructure to do it,' " Brenner says.

Brenner says Jobs raised the profile of design. Brenner, who now has his own firm, says there's a dark side to that: Everybody wants products to look just like Apple's.

"If it's not a machined piece of aluminum with black glass and one button it's not good," Brenner says.

Still, Brenner says the world of computers is a better place because Jobs and Apple took care to make high-quality, accessible products that have transformed everything from the way we listen to music to watching movies and communicating.