Accessibility links
Holder Takes Heat Over Guns Scandal A scandal over the botched gun-trafficking operation intensified on Capitol Hill this week. The chairman of the House Judiciary Committee has called for an independent investigation into whether Attorney General Eric Holder misled Congress. Another Republican has called on Holder to resign. 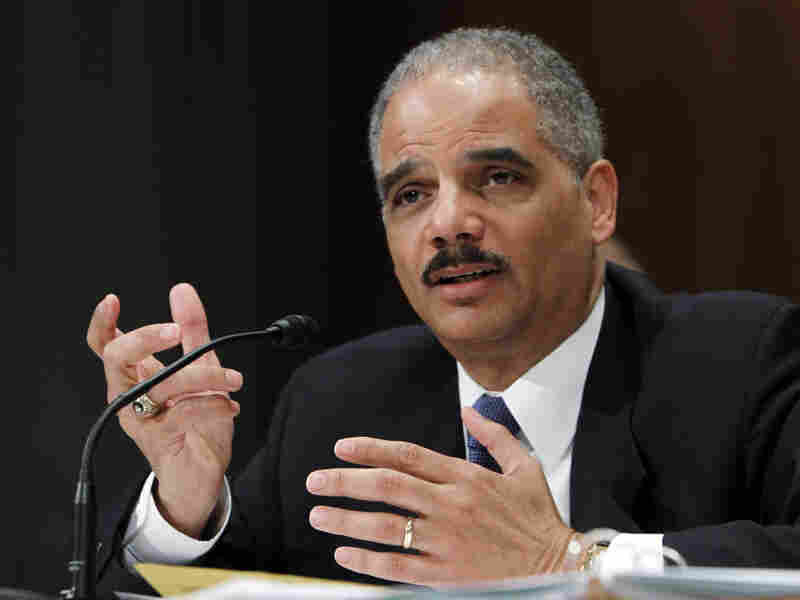 Attorney General Eric Holder, shown testifying on Capitol Hill this year, is in the spotlight because of emails and other documents that indicate he seems to have known about the Fast and Furious gun-trafficking operation earlier than he said. 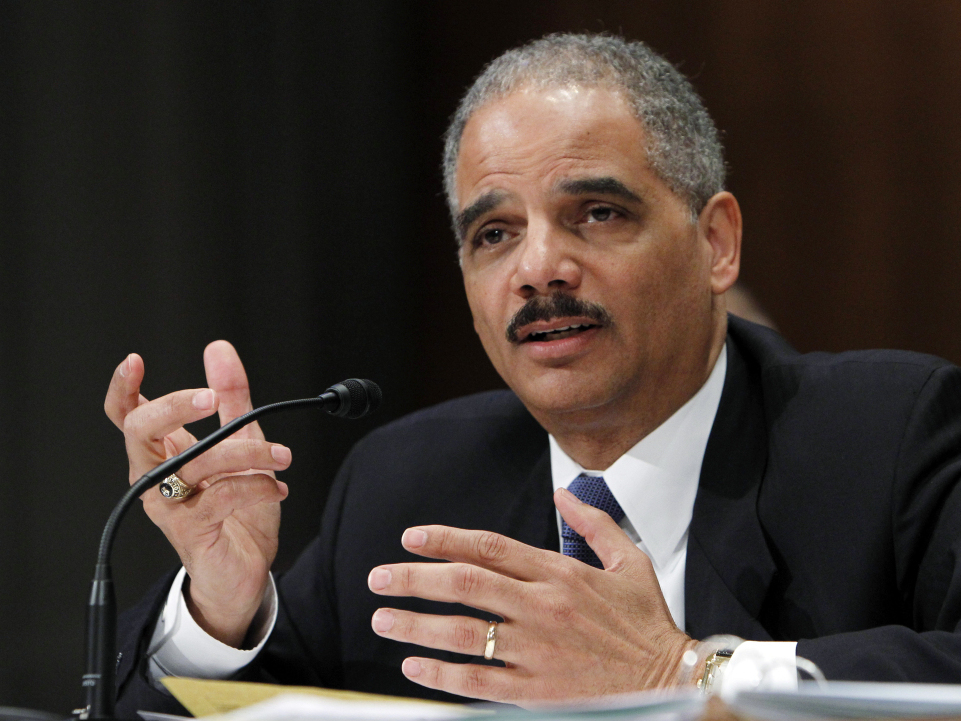 Attorney General Eric Holder, shown testifying on Capitol Hill this year, is in the spotlight because of emails and other documents that indicate he seems to have known about the Fast and Furious gun-trafficking operation earlier than he said.

Old hands in Washington know it's never a good sign when the president of the United States has to make a statement like this one.

"I have complete confidence in Attorney General Holder, in how he handles his office," President Obama told reporters at a news conference Thursday. "He has been very aggressive in going after gunrunning and cash transactions that are going to these transnational drug cartels."

Obama spoke as a scandal over a botched gun-trafficking operation known as Fast and Furious intensified on Capitol Hill this week. Rep. Lamar Smith of Texas, the Republican chairman of the House Judiciary Committee, called for an independent counsel to investigate whether Eric Holder misled Congress about the operation. Shortly after the presidential news conference, Rep. Raul Labrador, R-Idaho, called on Holder to resign.

Holder is in the spotlight because of emails and other documents the administration released to Republicans in Congress that show the attorney general seems to have known about the gun-trafficking operation much earlier than he said.

At a hearing in March, California Republican Rep. Darrell Issa asked: "When did you first know about the program officially, I believe, called Fast and Furious? To the best of your knowledge, what date?"

Holder replied: "I'm not sure the exact date, but I probably heard about Fast and Furious for the first time over the last few weeks."

The newly released documents show Holder received five weekly updates on the operation starting in July 2010. But the Justice Department chalks up the dispute to semantics. They say Holder meant he learned about federal agents' failure to monitor the weapons only earlier this year.

Issa, talking with MSNBC this week, says he isn't buying it.

"There may be an explanation that partially vindicates him — in other words, he may not have committed perjury — but he certainly failed in his duty of candor because he did know the name a year before that," Issa said.

On Thursday, the Justice Department released a statement defending Holder, saying "the Attorney General's testimony to both the House and Senate committees has been consistent and truthful.

"These brief entries buried in a few written reports reveal nothing of the dangerous tactics that were employed in this operation," it said.

The goals behind Fast and Furious may be the only thing not in dispute. Law enforcement officials wanted to target big Mexican drug cartels that use U.S. weapons to fuel violence along the Southwest border. Agents at the Bureau of Alcohol, Tobacco, Firearms and Explosives conducted surveillance at gun dealerships in Arizona, watching as suspicious people purchased large numbers of firearms. They intended to follow those weapons south, but agents in some cases lost track of the firearms. Some of the weapons later turned up near the body of U.S. Border Patrol Agent Brian Terry, killed in a gunfight last December in Arizona.

Two people have already lost their jobs over the scandal: Kenneth Melson, the acting head of the ATF, whose agents led the operation; and Dennis Burke, the U.S. attorney in Arizona, where the Fast and Furious operation played out.

This week, the new chief of the ATF, B. Todd Jones, followed through on a promise and overhauled his management team.

Sen. Charles Grassley, R-Iowa, said the shake-up is a good thing, but "rearranging the chairs on the deck," he said, won't make this scandal go away.

"The notion that somehow or other that this thing reaches into the upper levels of the Justice Department is something that at this point I don't think is supported by the facts, and I think as we examine and also as all the facts are in fact revealed, we'll see that that is not the case," Holder said.

The Obama administration is continuing to turn over documents to Republicans in Congress, including emails that suggest the ATF may have used similar strategies during the last Bush administration. But Republicans leading the investigation say the "Bush did it, too" defense doesn't fix the problem of what this attorney general knew, and when.

The House Judiciary Committee expects to hear from Holder as early as next month.