Accessibility links
Will Apple Lose Its Juice? The tech world is mourning Steve Jobs, who died Wednesday from complications of pancreatic cancer. But what will become of Apple without its charismatic co-founder? The company aims to keep the Jobs magic alive — from his management style to his infectious enthusiasm for the products. 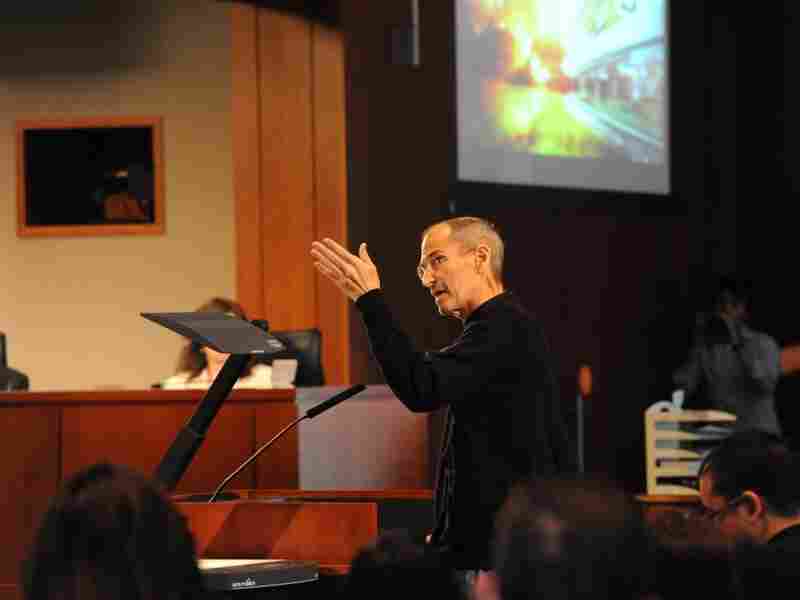 In June, Steve Jobs spoke at a Cupertino City Council meeting to show off his plan for a new headquarters. Even though he was looking quite unwell, he still knew all of the project's details. 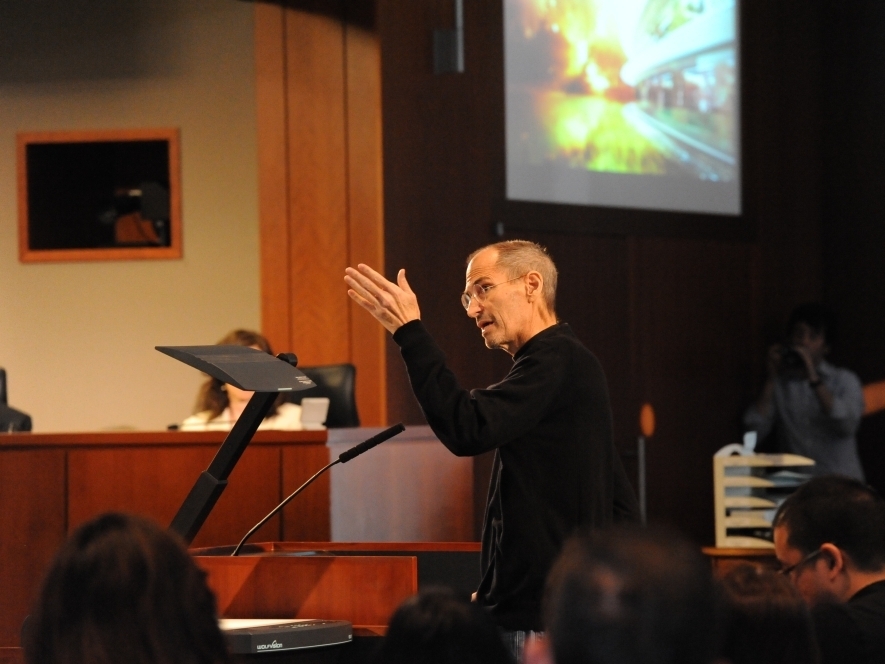 In June, Steve Jobs spoke at a Cupertino City Council meeting to show off his plan for a new headquarters. Even though he was looking quite unwell, he still knew all of the project's details.

The tech world is mourning Steve Jobs, who died Wednesday from complications of pancreatic cancer. Even as the tributes roll in, it's hard to avoid this nagging question: What will become of Apple without its charismatic co-founder?

Jobs rescued Apple from near bankruptcy and turned it into one of America's most important companies — and one of its biggest. Now, Apple is trying to keep the Jobs magic alive.

A Knack For Detail

A few months ago, Steve Jobs appeared before the Cupertino City Council to do a little slide show about the new headquarters Apple is planning in Cupertino, Calif.

"It's a pretty amazing building — let me show it to you," he said. "It's a little like a spaceship landed."

The scene resembled the rollout of a new iPhone as the star-struck City Council members gazed happily at the images of the shiny new building. But what was remarkable was the degree to which Jobs — already looking quite unwell — was still engaged with the project's details.

"There's not a straight piece of glass in this building," Jobs said. "It's all curves, and we've used our experience making retail buildings, and we know how to make the biggest pieces of glass in the world for architectural use."

Jobs was into everything at Apple — the products, the software, the marketing — and a lot of people say that was his secret. He didn't so much invent things as refine them. For instance, contrary to popular belief, Apple didn't invent the mouse-driven graphical interface — Xerox had computers like that in the early '70s. But with the Mac, Apple made the idea work.

TIMELINE: The Man At Apple's Core

"Having people prototype things over and over and over, until they get something that's almost perfect. Good enough — good enough for Steve Jobs," says Leander Kahney, a tech journalist who wrote the book Inside Steve's Brain.

But this attention to detail could also be a problem.

"They called him a terrorist, because he was always meddling with things," Kahney says.

Kahney says Jobs' micromanagement was "anarchic" during his first tenure at Apple.

But when Jobs returned to Apple in 1996, Kahney says, he figured out how to make his micromanaging more productive.

"The last 10 years have been characterized by a company with extraordinary discipline," he says. "And what's intriguing is how great creativity comes out of that great discipline and that rigor."

For the past few years — since Jobs' cancer diagnosis — Apple has been trying to institutionalize that discipline.

Josh Bersin, a Silicon Valley expert in talent management and corporate succession, says Apple is "digitizing" information about key decisions during the Jobs years and turning them into case studies for future generations of managers.

"What they're trying to do is essentially capture the essence of Steve Jobs and what he did and how he did it, so that people can maintain it," Bersin says.

The effort is called "Apple University," and Bersin says the company takes it very seriously. So seriously, it hired away the respected dean of the Yale School of Management to run it. Bersin says the hiring of Joel Podolny was also an indication of the project's secrecy.

"I remember when he got the job, we were all very curious to see what was going to happen," Bersin says. "Because in my space, it's a pretty big deal, and nobody's heard anything from him since."

While Apple may be able to institutionalize Jobs' management style, it's hard to see how it can preserve his other great quality — his contagious excitement.

Kahney believes Apple sales were driven in part by Jobs' sincere enthusiasm for the products.

"You could totally see it, when he came out onstage — he was so psyched about some of the things that he was introducing," Kahney says. "And that enthusiasm was extremely infectious, and helps produce those massive lines when the product goes on sale."

Kahney says Apple's new CEO, Tim Cook, comes off as a bit "dull" in comparison. And in fact, just a day before Jobs' death, Cook's presentation of Apple's latest iPhone was panned in the tech world for not being exciting enough.