Accessibility links
John Wayne: An Icon Of America's Booming Confidence It's been more than 30 years since the rugged film star's death, yet he still looms large in the national psyche. Critic John Powers was surprised to find that the indomitable American fighting man was actually a hard-earned act of self-invention. 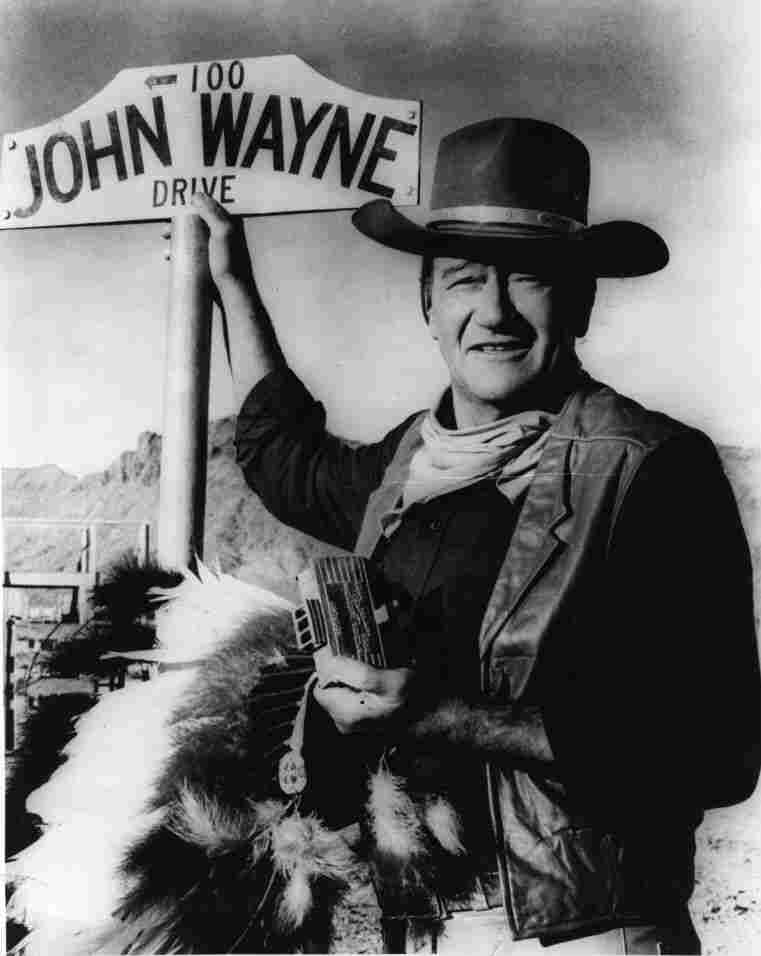 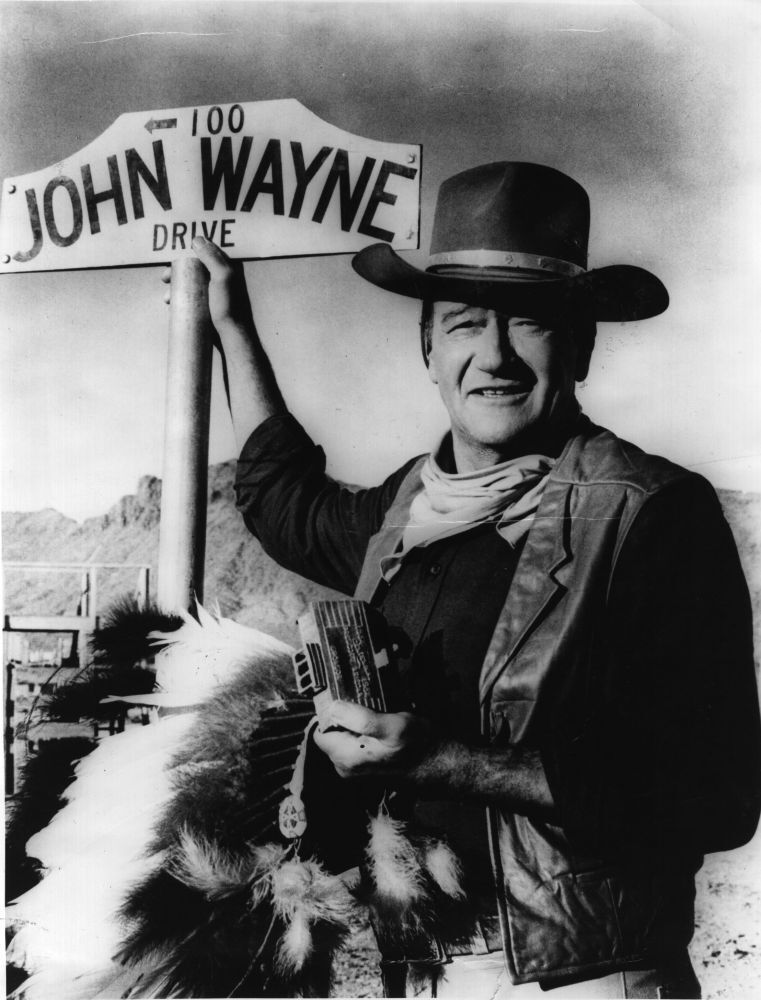 Earlier this year, the Harris Poll released its annual list of America's 10 favorite movie stars. There, among today's big names — Depp and Jolie and Clooney — was a lone name from the past: John Wayne. He finished third — 32 years after his death. Such enduring popularity served as a reminder that Wayne wasn't merely a towering movie star, he was one of the defining Americans of the 20th Century.

When I was growing up, Wayne was a cultural given, a man whose fame and physical stature made him something of his own Mount Rushmore. It never occurred to me that the John Wayne we all knew was a figment, a hard-earned act of self-invention.

His given name was Marion Morrison, and he was born in Winterset, Iowa, a few miles from my hometown. Part of the great migration to L.A., Marion spent his adolescence trying to escape his parents' unhappy marriage and to win his mother's love — which, incidentally, he never did. A chronic overachiever, he won a football scholarship to USC, but poorer than his frat brothers, he had to earn money by serving them their meals. Like so many others, the mortified Marion found himself drawn to the democratic fluidity of a Hollywood that was invented by social outsiders.

From The Coens, A Grittier Sort Of Truth Out West

Masculinity in the 21st Century

Although Marion was quickly given a manly new moniker — he always thought of it as the single word, "Johnwayne" — he took his own sweet time becoming John Wayne. Over countless B movies, he taught himself to talk that strange hesitant talk, and he consciously created a trademark walk, all swinging shoulders and hips. Duke was ambitious, and when other male stars volunteered for WWII, he stayed home. Working in a Hollywood suddenly deprived of male stars, he made movie after movie, often playing the thing he pointedly was not — the indomitable American fighting man. No actor has ever been better at embodying male authority.

Wayne's voice and manner are so easy to parody, it can take a while to grasp that he was a marvelous, canny screen actor. At his most ambitious, as in Red River, Rio Grande, The Searchers and Rio Bravo, he could act brilliantly. Yet even in routine pictures, he dominated the screen as few stars ever have, often by appearing to do nothing. A master of silence, he knew the camera, was the best reactor this side of Cary Grant and didn't fear emotion. Wayne let you feel his deep affection for his screen soulmate, Maureen O'Hara, who brought out his tenderness and middle-aged rue.

Americans care less about authenticity than a good show, and though Wayne's life wasn't heroic — he personally drank and smoked enough for the whole cast of Mad Men — his screen roles made him something grander than a mere hero. He became this country's "Idea of the Hero." From the mid-'40s through the '50s, Wayne embodied the American Century in all its booming confidence. If this sometimes meant embodying the darkness of our national past — Ethan Edwards in The Searchers is a genocidal monomaniac — that was never counted against his fundamental goodness. America's Duke was tough, honorable, ready to laugh and share a drink, and always ready to do what men had to do in order to see justice done. He didn't ask you to like him. He asked you to live up to him. 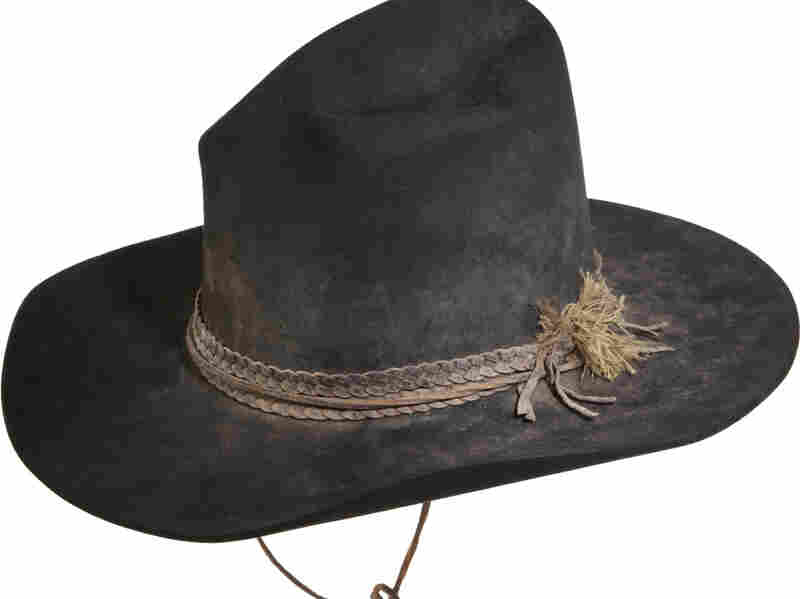 A hat worn by actor John Wayne in the 1975 film Rooster Cogburn is among the Wayne memorabilia to be offered for sale by Heritage auctions in October. 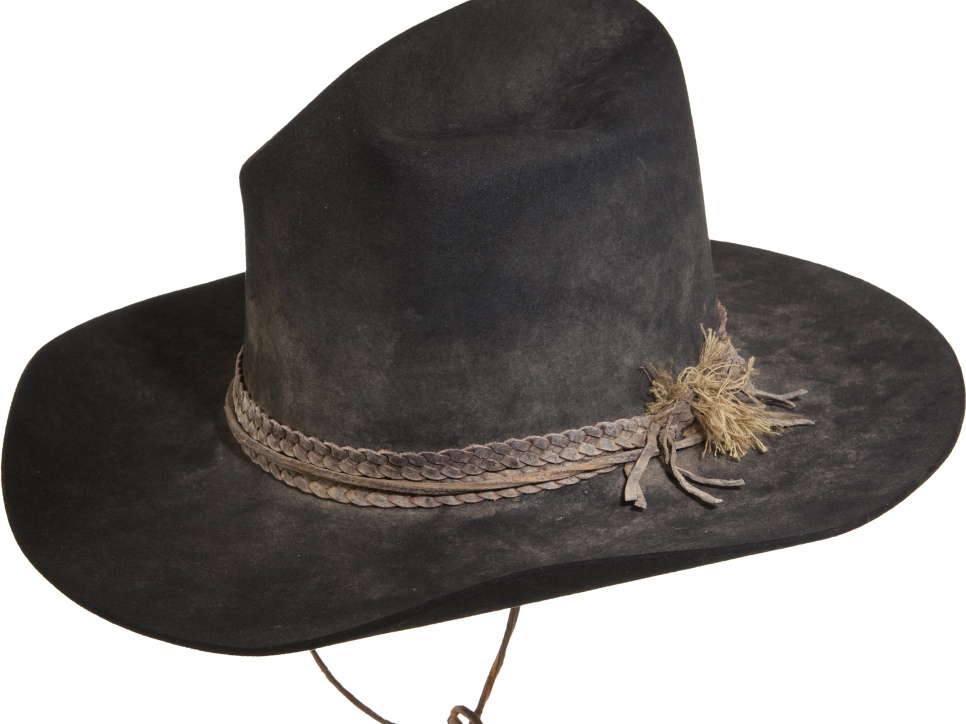 A hat worn by actor John Wayne in the 1975 film Rooster Cogburn is among the Wayne memorabilia to be offered for sale by Heritage auctions in October.

Over the years, Wayne's monolithic image turned him into a cultural lightning rod. Even as he inspired decades of conservative iconography — you can find his echoes in Ronald Reagan, George W. Bush and Rick Perry — his Republican politics and patriarchal style made him a target during the 1960s and 1970s. Mocking Wayne was part of a whole generation's rejection of authority.

But time moves on, and watching his work today, I don't care who he voted for. I'm moved by his film's portrait of an America whose confidence had yet to be shaken and by Wayne's uncynical ability to embody virtues that are well worth preserving: the contempt for pettiness and love of hard work; the courage to be lonely in pursuing your goals; the respect for individuals in all their cussedness; and above all, the willingness to fight and die for a cause bigger than yourself. All of that is John Wayne, and it's neither male nor female, conservative nor liberal. What it is, and always was, is American.