Accessibility links
Iran Charges Student Who Was In the U.S. An Iranian graduate student in the physics program at the University of Texas went home to see his family early this year. He never returned to school, and it turns out that he's being tried on charges related to espionage in his homeland. 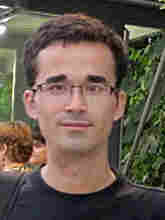 Omid Kokabee, an Iranian who was studying physics at the University of Texas, Austin, was arrested when he returned home to Iran for a family visit. He went on trial in Tehran this week on charges related to espionage.

An Iranian who was studying physics in Texas went on trial in Tehran this week on charges related to espionage.

Omid Kokabee, 29, a graduate student at the University of Texas, Austin, went home to Iran to visit his family back in February. After Kokabee failed to return to Austin, his friends discovered he had been jailed and charged in Iran with communicating with a hostile government and taking illegal funds.

His case is only now becoming public knowledge, just a few weeks after Iran released two young Americans accused of espionage and held for more than two years.

When it became clear Kokabee would be put on trial, several organizations lodged protests.

One of them, the American Physical Society, the largest group of physicists in the U.S., sent a letter to Iran's supreme leader, Ayatollah Ali Khamenei.

"He was just here in the U.S. to do his studies, just like many other Iranian students and other foreign students," said Michele Irwin, the society's international programs administrator. "The charges of him having communication with a foreign, with an enemy government or receiving illegal funds was just kind of ridiculous."

He was just here in the U.S. to do his studies, just like many other Iranian students.

Irwin said the letter explained that Kokabee was studying optics and was not involved in the nuclear field, which has been such a sensitive issue between the U.S. and Iran.

"We are also concerned that such treatment of scientific personnel will discourage other Iranian science students from seeking the pursuit of knowledge abroad," the letter said.

Just last month, Iran released the two American hikers who had been in prison for more than two years, charged with espionage. The release came during the visit to the U.N. of Iran's President Mahmoud Ahmadinejad.

It's not yet clear why the authorities in Tehran arrested Kokabee, says Abbas Milani, director of Iranian studies at Stanford University.

But, he noted, after the release of the two Americans, "there has been a lot of bickering and attacks and counterattacks from the judiciary, from the conservative camp against Ahmadinejad, and from Ahmadinejad against them."

Much criticism in the Iranian media was aimed at Ahmadinejad and the judiciary, which oversaw the hikers' case and required each to pay $500,000 to be released, says Muhammad Sahimi, who writes for the website Tehran Bureau.

He said many in the Iranian media wanted to know why they were released and why there were "no negotiations to release the Iranians that were jailed in the United States."

At least five Iranians are believed to be serving prison terms in the United States on charges of arms trafficking or other violations of economic sanctions.

"Even from some conservatives against the judiciary, saying that the way you played this out made us look like gangsters," he said. "To require them to pay $500,000 for what was allegedly a serious national security crime is absurd."

Just how Kokabee's case may intersect with these others is not clear, but it is in the hands of the judiciary, notes Sahimi.

"I interpret it as more of a domestic type of issue," he said, "trying to extract something from the guy and then in the process make some accusations against Ahmadinejad or the reformists or one of these human-rights groups and so on."