Accessibility links
Obama Pushes His Financial Plan As Bank Protests Spread Loosely organized protests that began on Wall Street last month have spread to other U.S. cities. President Obama says he understands the frustration conveyed by the Occupy Wall Street protest movement, and he's trying to channel that anger into support for his financial policies. 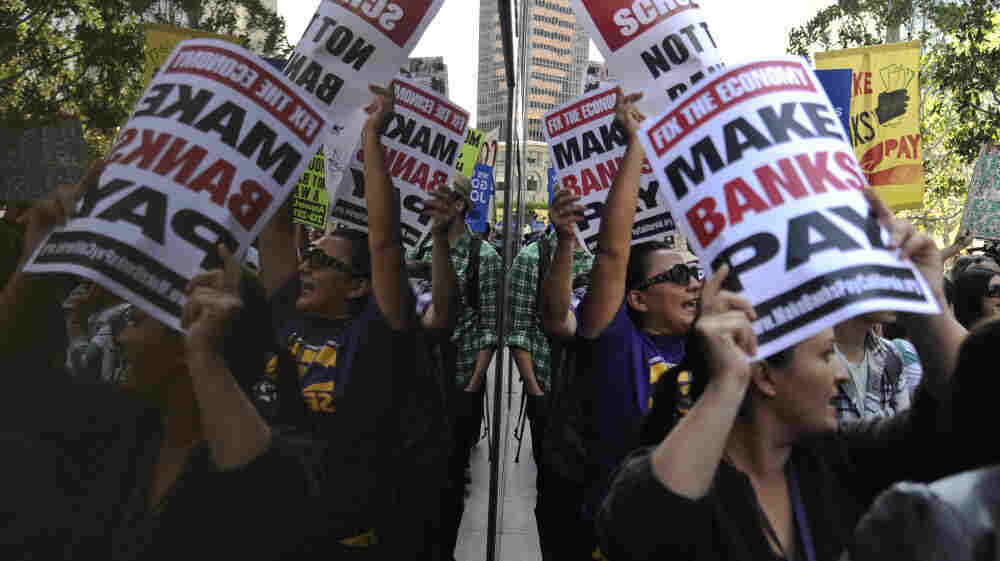 The Occupy Wall Street movement has spread to Washington, D.C., Los Angeles and other cities. In L.A. Thursday, protesters gathered outside a Wells Fargo downtown, above, and at a Bank of America branch where some were arrested for trying to protest inside.

Loosely organized protests that began on Wall Street last month have spread to other U.S. cities, giving voice to what President Obama has called a broader frustration with the financial system. The Occupy Wall Street movement could also provide a boost for the policies he says will reform that system.

Bankers and their allies in Washington, D.C., have resisted calls to clean up their act — even after triggering the worst economic crisis since the Great Depression — Obama said in a White House news conference Thursday.

"You're still seeing some of the same folks who acted irresponsibly trying to fight efforts to crack down on abusive practices that got us into this problem in the first place," he said.

He defended the financial overhaul he signed into law last year. Among other things, that law sets up a new government watchdog agency, designed to protect consumers from risky or deceptive banking practices.

Earlier this week, Obama suggested that the agency might target the new $5-a-month fee that Bank of America plans to start charging its debit card customers. On Thursday, though, he made it clear that the agency doesn't have the power to prohibit such fees. It can only make sure they're spelled out clearly.

"Banks and any business in America can price their products any way they want. That's how the free market works," he said.

But even if it doesn't have the power to limit fees, the new watchdog agency remains a bone of contention in Congress. The Senate Banking Committee on Thursday approved Obama's nominee to head the agency, Richard Cordray. But a group of Senate Republicans has vowed to prevent Cordray or anyone else from being confirmed to the post because they don't like the way the agency is structured.

A year ago, Obama passed up the opportunity to nominate consumer champion Elizabeth Warren to head the watchdog agency, thereby avoiding a fight with Senate Republicans. Former investment banker Douglas Elliott, who monitors financial regulations at the Brookings Institution, said this time the White House appears ready for battle.

"When the White House picked Cordray, they knew the Republicans would filibuster him. So they must have made the calculation that politically it was better for them to say, 'They wouldn't accept Warren. They won't accept this guy. They won't accept anybody until we do things their way,' " Elliott said.

That calculation is backed up by public opinion polls. Two surveys this summer, commissioned by consumer groups, found broad support for the new watchdog agency, as well as the broader financial overhaul. In his news conference, Obama tried to align himself with that sentiment while painting GOP rivals as beholden to Wall Street.

"You've got Republican presidential candidates whose main economic policy proposal is, we'll get rid of the financial reforms that are designed to prevent the abuses that got us in this mess in the first place," he said. "That does not make sense to the American people. They are frustrated by it."

If that's right, then the White House could lose the confirmation battle for its watchdog director, and still gain ground in a larger political struggle.