Accessibility links
Battles Against Oppressive Regimes Led To Nobel President Ellen Johnson Sirleaf and Leymah Gbowee of Liberia and Yemeni democracy activist Tawakkul Karman were awarded the 2011 Nobel Peace Prize for their courage in fighting for peace and women's rights. 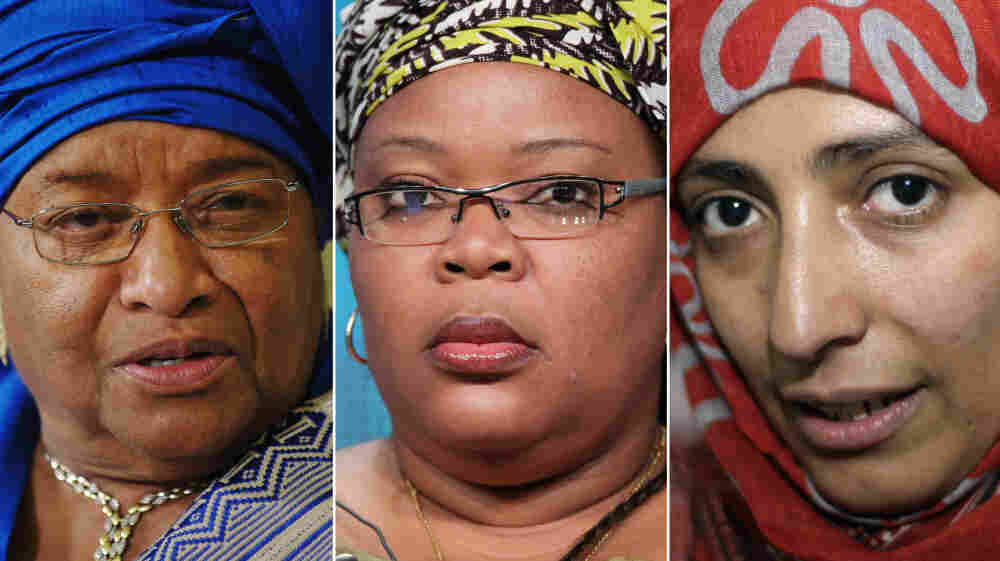 The three women who won the 2011 Nobel Peace Prize were lauded for their courage in standing up to the violence and brutality of oppressive regimes in Liberia and Yemen.

The committee said Sirleaf, Gbowee and Karman are being recognized for "their nonviolent struggle for the safety of women and for women's rights to full participation in peace-building work."

Only 15 of the 101 recipients since the inception of the peace prize in 1901 have been women, and Friday's award appeared to be aimed partly at addressing the disparity. Nobel Committee Chairman Thorbjoern Jagland said the inclusion of Karman was meant as "a signal that the Arab Spring cannot be successful without including the women in it."

Here are brief profiles of the three women who will split the 10 million kronor ($1.5 million) award.

The 72-year-old Harvard-trained economist became known as the Iron Lady after losing a bitterly contested 1997 election to notorious warlord and then-President Charles Taylor.

Sirleaf, who was born in Liberia, worked her way through college in the U.S. by mopping floors and waiting tables. She worked with the World Bank in Washington, D.C., and served as vice president of Citibank in Nairobi before returning to Liberia in 1985 to enter politics. But Sirleaf quickly ran afoul of dictator Samuel Doe, who had her jailed on charges of sedition. International pressure won her release. She was imprisoned again a year later.

Taylor forced Doe from power after a 1989 uprising and ruled until he went into exile in Nigeria in 2003. Two years later, Sirleaf was able to beat out a crowded field of competitors in free elections to become president of the West African nation. She inherited a country that had been torn apart by 14 years of civil war and economic chaos.

Speaking to Fresh Air in 2009, Sirleaf said that when she took office, Liberians were "a people with hopelessness, a people destitute, a people impoverished as a result of all this [civil strife]. We were classified as a failed state."

Since then, she has been credited with doing much to rebuild the tattered West African nation. She convinced the international community to write off debts and campaigned against corruption.

On winning the prize, Sirleaf told The Associated Press from her home in the Liberian capital, Monrovia, that it "gives me a stronger commitment to work for reconciliation.

"Every Liberian has contributed to it," she said. "We particularly give this credit to Liberian women, who have consistently led the struggle for peace, even under conditions of neglect."

But Sirleaf has not escaped controversy. She was an early supporter of Taylor, and even raised money for the notorious strongman before later turning against him. As a result, Liberia's Truth and Reconciliation Committee recommended in 2009 that Sirleaf be banned from seeking office for 30 years.

Sirleaf is running for re-election this month. Her opponents have accused her of buying votes and using government funds to campaign, allegations her campaign denies.

The 39-year-old activist is well-known for mobilizing street protests and leading the group Women of Liberia Mass Action for Peace — better known as the "women in white" — to protest the brutality of Liberia's long civil war.

Heard On Tell Me More

Gbowee told NPR on Friday that her movement started in 2002 when a voice in a dream told her to "gather the women of the churches to pray for peace."

Under her leadership, the movement was able to press for peace talks in Ghana in 2002, and then held peaceful protests around the meeting hall in the capital, Accra, to keep up pressure for a cease-fire.

Gbowee said that when she and other women went to then-President Taylor to demand that the government enter peace talks, "it was a defining moment."

"We were just fed up. We were tired, and we were fed up," she said.

In November 2003, Gbowee led hundreds of female protesters through Liberia's battle-scarred capital. They demanded the swift disarmament of fighters who they said were raping women and girls of all ages despite the yearlong lull in hostilities.

Among the women's tactics was a "sex strike" in which they pledged to refrain from sex with their partners to press their cause.

In 2009, Gbowee told NPR's Tell Me More why she chose that method to try to combat the horrific violence against women in her country during the war:

"We didn't have the power to go to peace talks, so we just thought, 'What else do we have to lose?' " Gbowee said. "Our bodies are their battlefield. Let's just put our bodies out there because it was just about at that point in time — all of us, the mindset was we need to do something to change the situation if our children must live in this country."

Two months after leading the 2003 sex strike, she confronted a rebel official in another march to call on forces on both sides to put an end to violence and looting.

Heard On All Things Considered

"You're supposed to be our liberators, but if you finish everyone, who will you rule?" Gbowee asked the rebel official, Sekou Fofana, at his headquarters.

Known as the "mother of the revolution," Karman has been at the forefront of Yemen's uprising against the country's authoritarian president, Ali Abdullah Saleh.

The 32-year-old activist has spent years lobbying for greater human rights in Yemen, and her arrest in January helped ignite protests by hundreds of thousands of people demanding Saleh's ouster and the creation of a democratic government.

In August, NPR's Kelly McEvers profiled Karman and described the threats and intimidation that the Yemeni endured at the hands of authorities.

"The worst one, she says, came in 2007, when someone told her they would kill her, kidnap her children and throw them from a mountain," McEvers reported. "But Karman didn't stop organizing protests. Looking back now, though, [Karman] says they did little good.

"[Then] everything changed with the uprising in Tunisia and the fall of the first Arab dictator in January," McEvers said.

In choosing Karman to share the prize, the Nobel Committee was able to honor those who have taken part in the Arab Spring protests that changed the political landscape in the Middle East and Northern Africa, toppling long-standing regimes in Tunisia, Egypt and Libya, and threatening others.

"I am very, very happy about this prize," Karman told The Associated Press. "I give the prize to the youth of revolution in Yemen and the Yemeni people."