Accessibility links
Interview - Frank Langella On Acting, Aging And Playing The Big Bad The man who once brought Richard Nixon to life onstage returns in a Broadway revival of Man and Boy. He explains how he plays a villain learning to cope with a conscience — and why the 1963 show's theme still resonates. 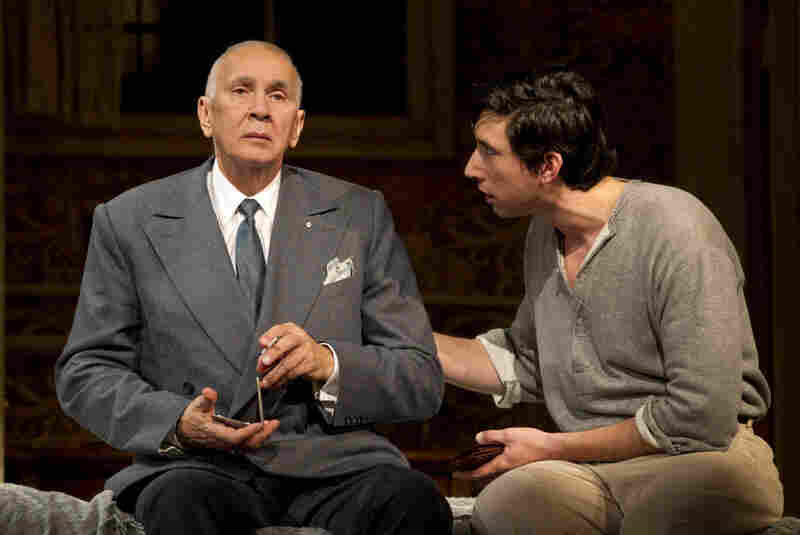 'Man' Of Some Importance: Actor Frank Langella (left, with Adam Driver) anchors the Roundabout Theatre Company's Man and Boy, about a highflying financier whose empire hangs by a thread. 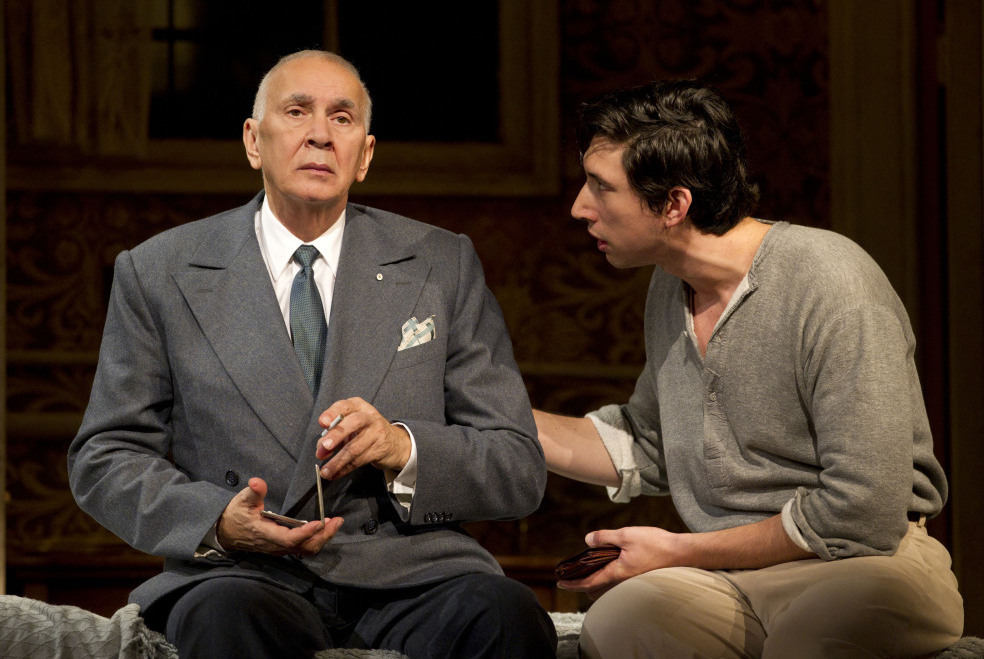 'Man' Of Some Importance: Actor Frank Langella (left, with Adam Driver) anchors the Roundabout Theatre Company's Man and Boy, about a highflying financier whose empire hangs by a thread.

Nobody glowers like Frank Langella. The man who brought Richard Nixon to life in his Tony Award-winning turn in Frost/Nixon and who was a true lizard in Seascape is now playing Gregor Antonescu, an acclaimed international financier who was exposed as a flagrant and successful fraud.

He's starring in a revival of Terrence Rattigan's 1963 play Man and Boy, which has its opening night Oct. 9. The play centers on the sudden reunion of the father (Langella) and the son he'd thought was dead. (Actually, the son's just living in Greenwich Village.)

It's not an easy reunion. Asked in the play if he has a conscience, Langella's character says he does — albeit one in a human shape, in the form of his estranged son. Langella says the love that his character's son has for him in the play is pure, and his character just can't handle that.

"The son is the reminder to him of the kind of dissolute life he lives," Langella says. "If he lets his love for his son in, and vice versa, he won't be able to do what obviously means more to him" — i.e., bilk people.

No Smile, But He'll Play The Villain

In Langella's dressing room in the American Airlines Theatre in New York, the actor tells NPR's Scott Simon that he gets a special satisfaction in playing characters a lot of other people find immediately unappealing.

"These men who are monstrous, so to speak, are enormously, enormously rewarding to play — much more so than a good man," he says. Not that there aren't rewards to playing heroes. "But there's so much more that you can draw on when you play a man who's complicated, difficult and downright mean, as this man is."

The key, he says, is not to see the character as a villain.

"I have to see it all from his point of view," Langella says. "I can't judge him. I can't say, 'Oh, how terrible of him to do this, wink wink, let me find a way to soften what he's doing.' 'Cause when you're inside yourself, no matter what you are, you believe in what you're doing. You don't say, 'I just screwed somebody over in business. ... I'm a really mean person.' You lie to yourself and tell yourself all the reasons why it's OK for you to do what you do. Even a serial killer does that. We're all very quick to judge anybody else's cruelty and very quick to justify our own."

Langella says he thinks the theme of Man and Boy would resonate even if its story weren't told against the backdrop of a financial scandal that will seem familiar to anyone who keeps up with the headlines.

"The man I'm playing is at the end of his road financially, and in his business life, he's desperately trying to save himself one last time, but the theme of the play is universal," Langella says. "I think it says, 'Why do we put up so many roadblocks to real love, real intimacy, real caring? Why do we search out things that only give us temporary satisfaction and rewards, when something quite pure and beautiful might be standing there, wanting our love?' ... You know, we go to a cigarette or a drink or rampant sex or making lots of money or possessions. And that's universal. Everybody, I think, suffers from that."

Words To Live By

The cathartic possibility of the theater needs nothing more than the actor and the stage.

In other words, who needs the smoke, bells and whistles of modern theatrical productions? They can get in the way of an audience's experience.

"You can have theater with all of those things, but you can't have the cathartic possibility of theater — that thing that lifts you beyond yourself as an audience member," Langella says. "You really just need the platform and the actor, another piece of humanity, sharing his humanity with the audience."

"Don't open your mouth if you don't mean every word you're saying," Langella says.

Leap empty-handed into the void.

It's Langella's favorite quote on the wall.

"It's the hardest thing to do," he says. "It takes a lot of work and a lot of time and a lot of competence to finally know that if you've learned your lines and you understand what they mean and you're ready to go and you fixed the costume and the light's OK, you just walk out onstage, and you leap empty-handed into the void, and you see what comes back to you."

What You Leave Behind Backstage

Langella says part of growing as an actor is learning not to carry around the sadness of a character like the one he plays in Man and Boy after the show has ended each day.

"By the very nature of repeating it and discovering it, I do get more and more affected by the powerful emotional connection the father and son have in the last moments of the play and what his life is like," he says. "It happens onstage, and I let it happen onstage, and it often fills me with great sadness. But when it's over, it's over. I don't carry it with me."

"I remember a young actor told me once that it took him a year to get over playing Hamlet, and I said, 'Well, then you did it wrong.' It should take you until your first glass of wine at the restaurant later on to get over it."

Langella says he's found a kind of strength in recent years that he wasn't able to bring to the stage when he was younger.

"I haven't done any plastic surgery or any plugs in my head," he says. "I'm letting my hair go as it goes, and I'm trying to age gracefully into my profession as well as life. I think it's madness to try to be what you were."