Accessibility links
A Lost Little Girl Looms Large In 'Private Property' Paule Constant's novel, first published in France in 1981, has finally been translated into English. Nine-year-old Tiffany is alone in the world; her parents, French colonialists living in Africa, have sent her back to France alone to live and be schooled at the aptly named Convent for Slaughterhouse Ladies. 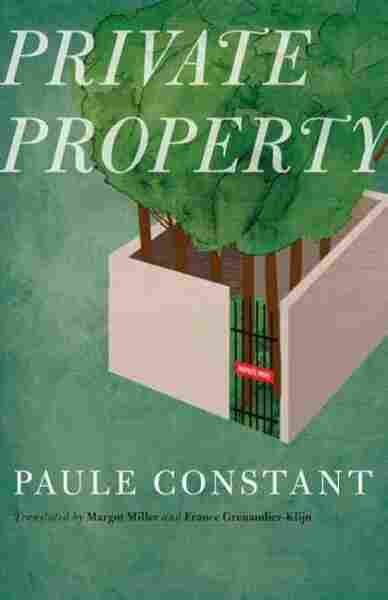 There is no greater horror to a child than standing out. Being different means being easy prey. When your daughter comes home crying because someone has made fun of her freckles, her hair, her thick glasses, you might try to console her with "one day you'll appreciate those freckles, you'll find them beautiful," but she won't be comforted. A child wants only to blend in, to be absolutely the same as everyone else.

Tiffany, the 9-year-old at the center of Paule Constant's Private Property, is not like the other girls, and she has no mother to wipe away the tears. Her parents, French colonialists living in Africa in the years leading up to the Algerian War, have sent her back to France alone to live and be schooled at the Convent for Slaughterhouse Ladies. The nunnery's name sums up the atmosphere of the place, where the playground becomes the setting for young girls' bloodsports and the nuns dole out about as much softness as the scratchy stiffness of their garments. The other girls tease and torment Tiffany for her African origins, her missing mother and for the way she does her hair. Every time she reaches out for solace or companionship, she is, at best, met with indifference. Understandably, she strives to become an invisible observer, at a remove from everyone else.

Private Property, first published in France in 1981 and only now being translated into English, is the second in a series of autobiographical novels from Constant. But it's not necessary to have read its prequel, 1980's Ouregano, to find your place in the thorny dynamic of Tiffany's family. While Tiffany remembers with great detail the perfume of her grandmother, her elegant clothing and the feel of her skin, she holds no such nostalgia for her mother, who remains a mystery to the reader for most of the novel, known only through her absence, both in a physical sense and from her daughter's daydreams. When the mother does show up, it is no great surprise that she is a whirl of melodrama and emotional cruelty.

Constant is more interested in creating moods than scenes, a writer who errs by being perhaps too diligent with the old "show, don't tell" maxim. When cataclysm does hit, the action remains murky and difficult to follow. But the small moments in the novel are vivid and memorable, and more than make up for any confusion. The author surprises with her quirky imagery and powers of observation, like her description of the Mother Superior's habit: "When she stood it was as if a ship had hoisted all its sails." Also perfectly conveyed are Tiffany's ostracism on the playground ("The recess periods were spent in a pretense of playing so as not to displease the Lady, and at not playing so as not to irritate those who were playing. She played at playing ...") and the daily torture chamber that is the lunch cafeteria.

Small of scale does not mean small of consequence. That goes for the diminutive Tiffany as well as Private Property itself. Those moments that look so tiny, those school humiliations and emotional kicks at home, continue to shape us into adulthood. Constant's portrait of a little girl lost, someone who would be happier to camouflage herself in the furniture than to take the spotlight, will loom large in the mind.

Read an excerpt of Private Property