Accessibility links
Florida Family's Legacy: A 135-Year-Old Pickle James Boyle, of North Port, Fla., has an unusual family heirloom: a pickle, grown and bottled by his great-great-grandmother in 1876. Just for reference, that's also the year of Custer's defeat at Little Bighorn and the first telephone call made by Alexander Graham Bell. 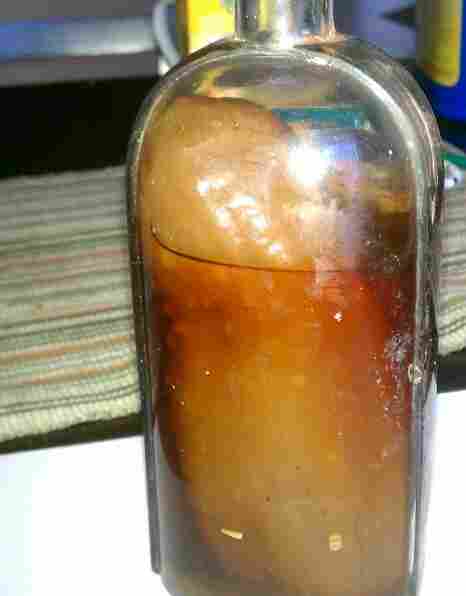 James Boyle's great-great-grandmother bottled this pickle in 1876, and the family has been passing it down ever since.

Here's a partial list of things that happened in 1876:

It was, of course, the nation's 100th birthday. George Armstrong Custer met his fate at the Battle of Little Bighorn. Alexander Graham Bell made the first phone call. A giant squid, 18 feet long, washed up on a beach in Newfoundland.

And James Boyle's great-great-grandmother grew a very special cucumber in her Illinois garden. She put the sprouting vine in an old medicine bottle, so the cucumber grew inside it.

"She pickled it, and corked it, and it has been in the family ever since," Boyle tells Robert Smith, guest host of weekends on All Things Considered.

You read that right — the Boyle family, now of North Port, Fla., has been passing down this historical pickle ever since 1876.

"You know, a lot of people talk about heirlooms, you know, jewelry and necklaces and stuff like that," Boyle says. "But why would somebody pass down a pickle? That's just weird."

"Midwesterners are farmers and I don't know if that's what they did for fun back then," he adds. "But it's a fun thing."

Boyle says he's planning to pass the pickle on to his kids, unless someone makes him a better offer. In the meantime, any danger that someone will eat the elderly pickle after all these years?