Accessibility links
Classroom Computers, Another Legacy Of Steve Jobs Apple helped pioneer the use of computers in schools back in the 1980s with the graphical interface of the Macintosh. These days, it's the iPad that's the hot trend in education and Jobs' education legacy is growing with the popularity of mobile devices in the classroom. 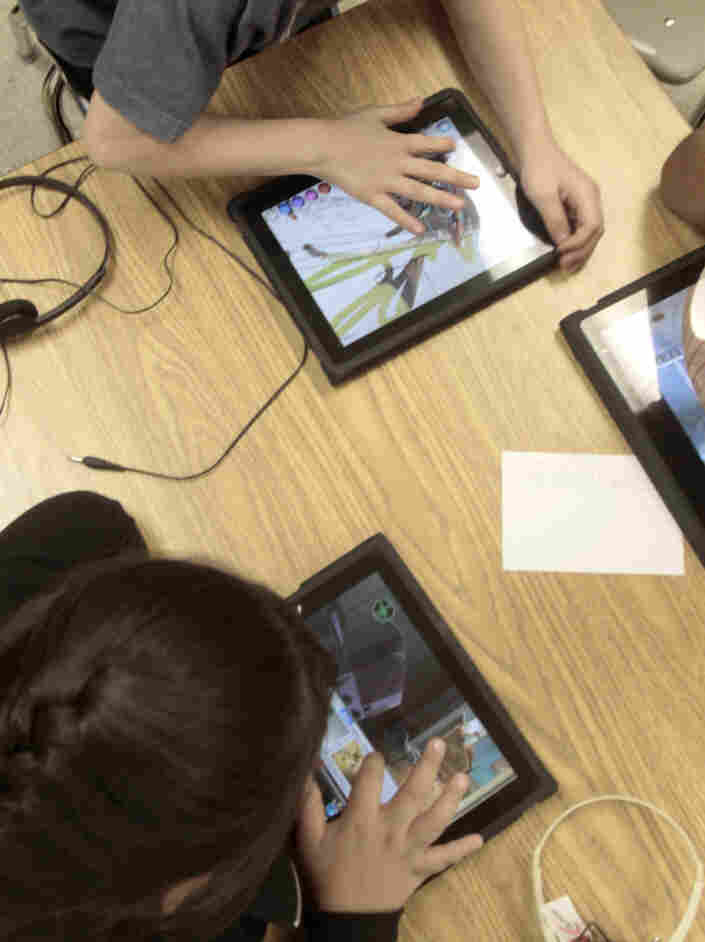 Students in a special education classroom hunch over iPads provided by the school district at Adams Elementary School in Coon Rapids, Minn. 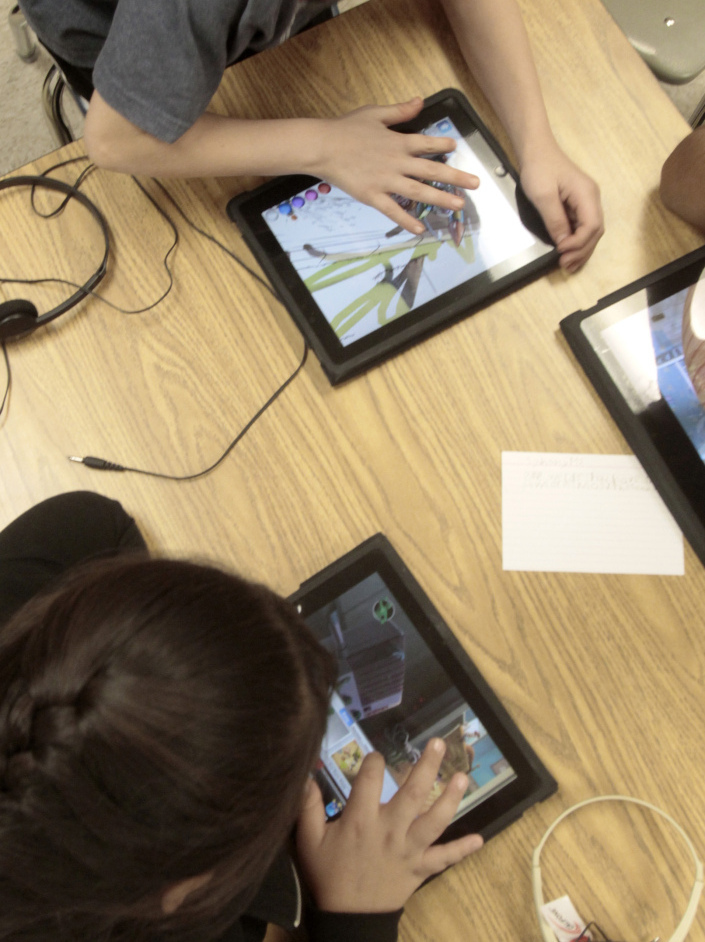 Students in a special education classroom hunch over iPads provided by the school district at Adams Elementary School in Coon Rapids, Minn.

When Apple co-founder Steve Jobs died this past week, some of the most heartfelt online tributes came from educators and students.

Apple helped pioneer the use of computers in schools back in the 1980s with the graphical interface of the Macintosh. These days, it's the iPad that's the hot trend in education and Jobs' education legacy is growing with the popularity of mobile devices in the classroom.

At Santa Rita Elementary in Los Altos, Calif., fifth-graders do their math on Macbooks while their teacher is using an iPad to track their progress. You could see this scene in classrooms across the country; Jobs placed a strong emphasis on getting a foothold in schools.

Karen Cator worked in Apple's education department for a dozen years. She says Jobs' concept of the personal computer was always linked to learning.

"He was very focused on making sure that all of the technologies were focused on people," Cator says. "It was about augmenting human performance and helping people be as excellent as possible."

In the early days, Apple had to create a market for personal computers in schools. Liz Kolb, a lecturer at the University of Michigan, says the graphical user interface that Jobs popularized helped elementary students begin using computers.

"A few years before that, nobody thought that a third-grader or fourth-grader could use a computer," Kolb says.

At first, Apple dominated the education marketplace. The company spread the word through a savvy marketing campaign that cemented the loyalty of teachers. Tom Greaves, an education consultant in California, says Apple created a group of evangelists called "Apple Distinguished Educators."

The group would go to trade shows and speak at conferences, Greaves says. If a school wanted to move over to using Apple in the classroom they could speak to the Apple Distinguished Educators to do that.

Soon, cheaper machines running Microsoft Windows ended up taking the lead among schools. But in recent years, according to Greaves, Apple has been resurgent, and is now back to about a quarter of the education market. Greaves says Apple's role has grown with the rise of mobile devices, from wireless laptops to iPhones and iPads.

"Apple is growing much more rapidly on the mobile side than the other vendors," Greaves says. "They got onto it earlier; as the world moves to mobile, then Apple will reap the benefits of that."

Although Windows machines still dominate, Apple has become the largest single vendor to schools. Tim Garton of the Maine Department of Education says he's gone with Apple for 10 years because the company unifies software, hardware and support in a way others cannot.

"It's a total solution," Garton says.

Apple has been pushing just as hard into the higher education market. In a recent survey, nearly half of all college students said they planned to buy an Apple laptop. Eric Weil of Student Monitor did the survey, and he says buying an Apple product ranks really high among all the priorities of college students.

Whether Apple products have been effective education tools is another question. Many still question whether all the money spent on technology has yielded much. But thanks the focus by Jobs on the classroom, few schools ask whether they need technology — now it's a question of how much and how to use it.