Accessibility links
A Rush To Calm Families Frightened By Alabama's Immigration Law Activists and educators are reaching out to Hispanic families in Alabama who are worried about what the tough new law will mean for them. The measure requires schools to record the immigration status of all newly enrolled students, prompting more than 2,000 Hispanic children to vanish from schools early last week. 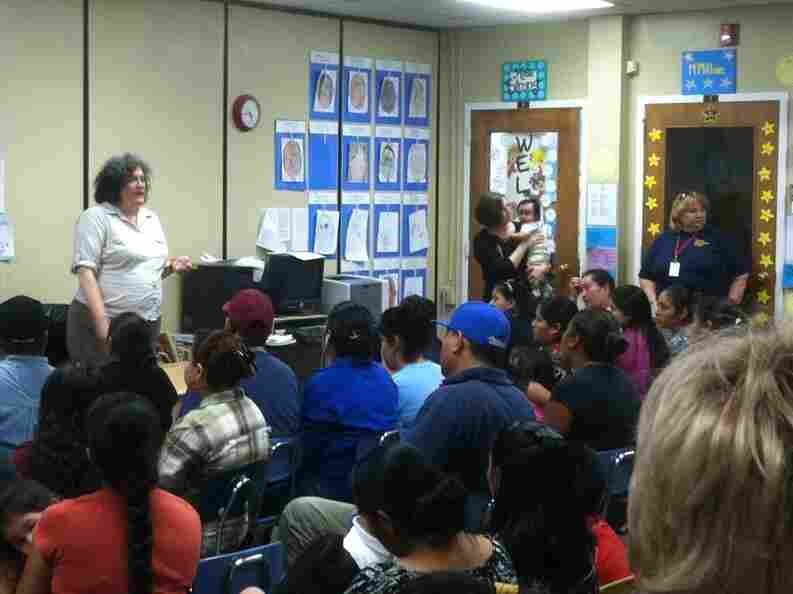 Monica Hernandez of the Southeast Immigration Rights Network addresses a Know Your Rights meeting at Tarrant Elementary School, just north of Birmingham, Ala. 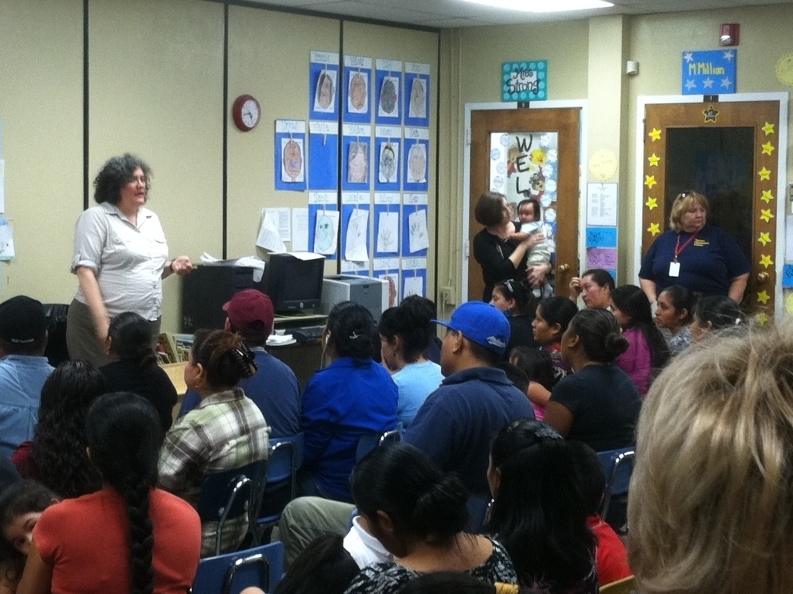 Monica Hernandez of the Southeast Immigration Rights Network addresses a Know Your Rights meeting at Tarrant Elementary School, just north of Birmingham, Ala.

Roughly 80 people, most of them Spanish-speaking women and children, packed the media center of Tarrant Elementary School, just north of Birmingham, Ala., recently. Considering the number of kids in the room and spilling out into the hallways, there was surprisingly little noise.

It was a "Know Your Rights" meeting, meant to calm fears and familiarize families with their legal rights in light of Alabama's tough new immigration law.

Activists and educators are reaching out to Hispanic families in Alabama who are worried about what the law will mean for them. The measure requires schools to record the immigration status of all newly enrolled students.

One middle-schooler, whose family did not want his name to be used, has a lot on his mind.

Sonja Smith, the school nurse at Tarrant Elementary, sees the medical manifestations of the fear in the community.

"Kids have been out. They are scared to come to school. They're having panic attacks," she says. "Some of the wives have passed out. Some of the husbands, they have been staying at home because they can't go to work, so they're fighting with their wives."

Superintendent Shelly Mize reassured the crowd at Tarrant that she had spoken with local police and they don't have the resources to come looking for illegal immigrants. She also told concerned parents that if they're detained, like after a traffic stop, arrangements can be made for others to pick up their children up from school. Mize thinks the law gets in the way of the American dream.

"When families come here looking for a better life, you know, they should be allowed to strive for that, and not have to worry about sending their children to school," she says.

Efforts to reassure families are coming from school systems and from groups like the Southeast Immigration Rights Network, which hosted the talk at the elementary school.

Longtime Network activist Monica Hernandez reiterated that under the law, only numbers of undocumented students — no names — will be reported to the state Department of Education.

"I'm trying to make you understand, all we're about is gathering the data," he says, "and the data, provided ultimately to the legislature, will assist them with regard to a number of things. There's all sorts of legitimate reasons why those questions are being posed about the child. We're gonna comply with the law."

Activists are vowing to continue their fight to overturn the law.

"This is not over 'til it's over," says Helen Rivas of the Alabama Coalition for Immigrant Justice. "This is going to be going on for a very long time."

On Friday, the Justice Department asked the 11th Circuit Court of Appeals to stay the law after a similar request was rejected by a federal judge in Birmingham.