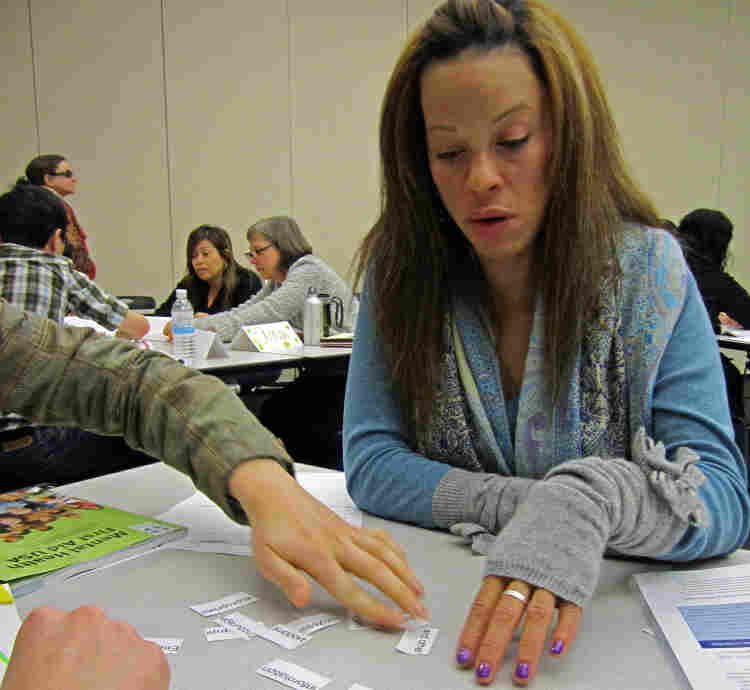 Nikki Perez struggled after being diagnosed with mental illness. A course is training her how to help others in crisis. 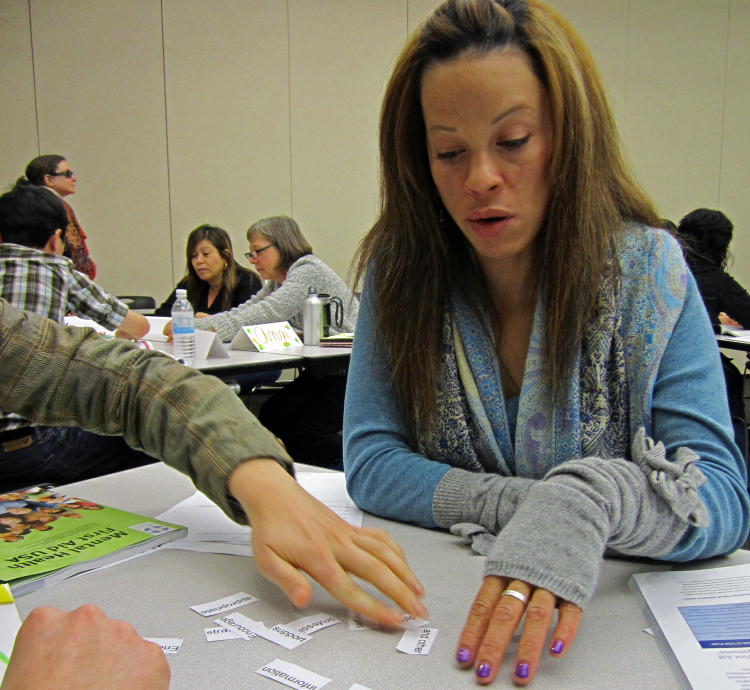 Nikki Perez struggled after being diagnosed with mental illness. A course is training her how to help others in crisis.

When Nikki Perez was in her 20s, she had a job as a lab tech at a hospital in Sacramento, Calif. She said everything was going well until one day, when something changed.

"I worked in a very sterile environment, and so part of the procedure was to wash your hands," she said. "I found myself washing my hands more and more, to the point where they were raw, and sometimes they would bleed."

Perez went to the doctor and was diagnosed with something she had never even heard of — obsessive-compulsive disorder. At the time she was living with her parents. She quit her job and went on short-term disability.

Researchers say 1 in 4 adults has a mental disorder. But while many Americans are trained in first aid and CPR to respond to medical emergencies, few are prepared to help others experiencing a mental health crisis.

Perez said her illness turned her life upside down. She would sit in her parents' room watching TV on the floor, afraid to move. She didn't want to get caught up in the obsessive routines around the house.

Overall, it was profoundly isolating. Her family, like many people, didn't know how to handle mental illness.

Finally, she got treatment, but her experience made her want to learn more about mental health issues so she could help others in crisis.

She found just the right class, called Mental Health First Aid. Bryan Gibb is the director of public education for the National Council for Community Behavioral Healthcare, which runs the course.

"We often train to know CPR or the Heimlich maneuver or first aid. But the reality is, it's much more likely that we're going to come in contact with someone suffering from an emotional crisis than someone suffering a heart attack or choking in a restaurant," he said.

Part of the learning process involves group exercises. Nikki Perez participated in one that simulated what it's like for people who hear voices. She tried to have a conversation while someone whispered in her ear "don't trust him," "you're a failure," and "is he looking at you?"

After the class, members who get this firsthand perspective of the different symptoms of mental illness then learn how to approach someone who's having a psychotic episode. They're told to speak calmly and clearly, and not to dismiss or challenge the person about their hallucinations.

Direct Questions For The Suicidal

As with any first-aid course, there's an Action Plan for what to do if someone's in crisis: assess the person for risk of harm or suicide, listen non-judgmentally, give reassurance, and encourage the person to seek professional help.

Gibb says that for this to work, people need to force themselves to ask direct questions: Are you thinking of killing yourself? Do you have a plan? Do you have the things you need to complete that plan?

Gibb told the class to never leave an actively suicidal person alone and to call the police if the person has a weapon or is acting aggressively.

Longtime mental health advocates with the National Alliance on Mental Illness, or NAMI, say courses like this raise awareness about mental illness. Jessica Cruz, executive director of NAMI California, said this reduces the stigma around getting help.

"If people know that others are trained in how to deal with a crisis situation, they may even reach out for help before they even get to that crisis point," she said.

Cruz is so impressed with the course, her own staff is going to be trained next month.

That's already under way at schools, the workplace and churches. Since it started three years ago, more than 30,000 people have been trained around the country; another 20,000 are expected to get training by the end of the year.

Perez says she would recommend this course to anyone.

"I think it's one of the best things that I've ever done for myself so far," she said.

The National Council for Community Behavioral Healthcare said thousands of people like Perez now have the skills to help those experiencing a mental health crisis. But the group emphasized that this is first-aid training and should be used to keep someone safe and stabilized until the professional help arrives, just like if you're responding to someone having a heart attack.