Accessibility links
No Nukes: Bringing The Right And Left Together A nonpartisan group hoping to phase out and eliminate all nuclear weapons brings together leaders from the right and the left this week at the Reagan Library.

No Nukes: Bringing The Right And Left Together

No Nukes: Bringing The Right And Left Together 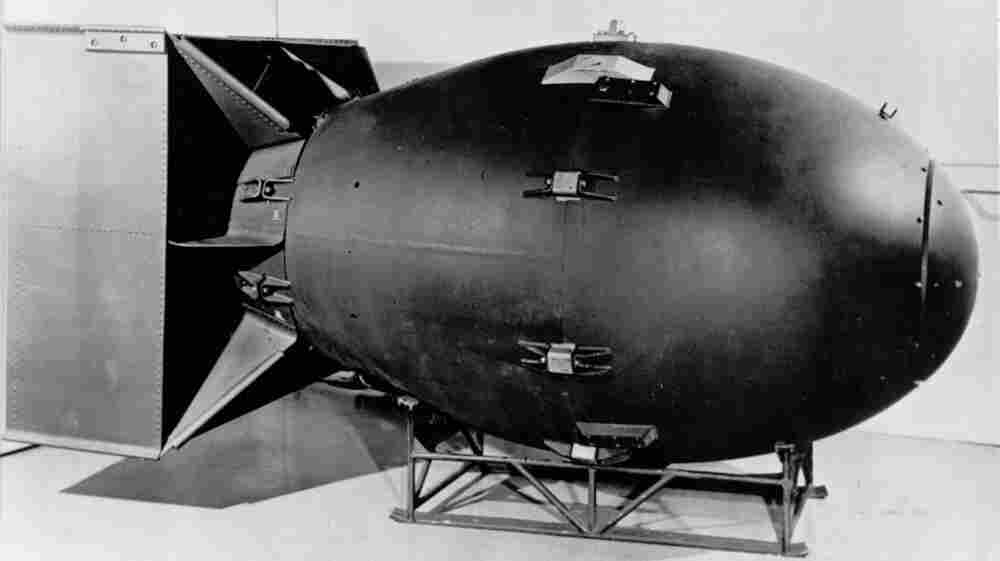 The type of atomic bomb that was used in Japan in World War II, known as the "Fat Man," is shown here in a 1960 photo released by the U.S. government. Liberals and conservatives are gathering at the Ronald Reagan Presidential Library on Tuesday to call for efforts to eliminate nuclear weapons. 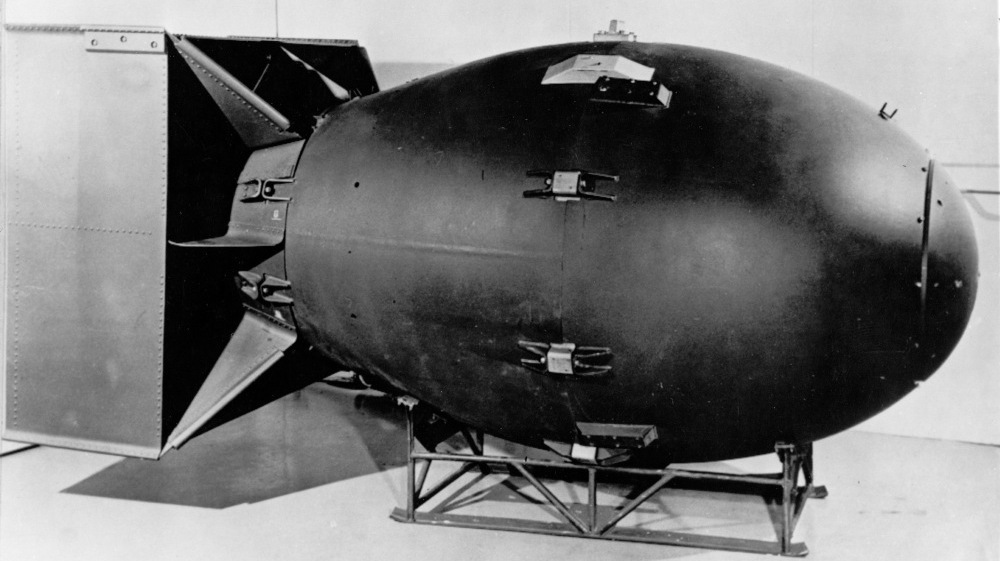 The type of atomic bomb that was used in Japan in World War II, known as the "Fat Man," is shown here in a 1960 photo released by the U.S. government. Liberals and conservatives are gathering at the Ronald Reagan Presidential Library on Tuesday to call for efforts to eliminate nuclear weapons.

Finally. Something the right and the left can agree on: nuclear disarmament.

On Tuesday, more than 70 notable people from around the world will convene at the Ronald Reagan Presidential Library in Simi Valley, Calif. They will beseech international potentates and personages to seriously work toward eradicating nuclear weaponry from the face of the Earth.

To many observers, the idea of undoing what has been done is like trying to put shaving cream back in the can — or, more to the point, radiation back in the warhead. 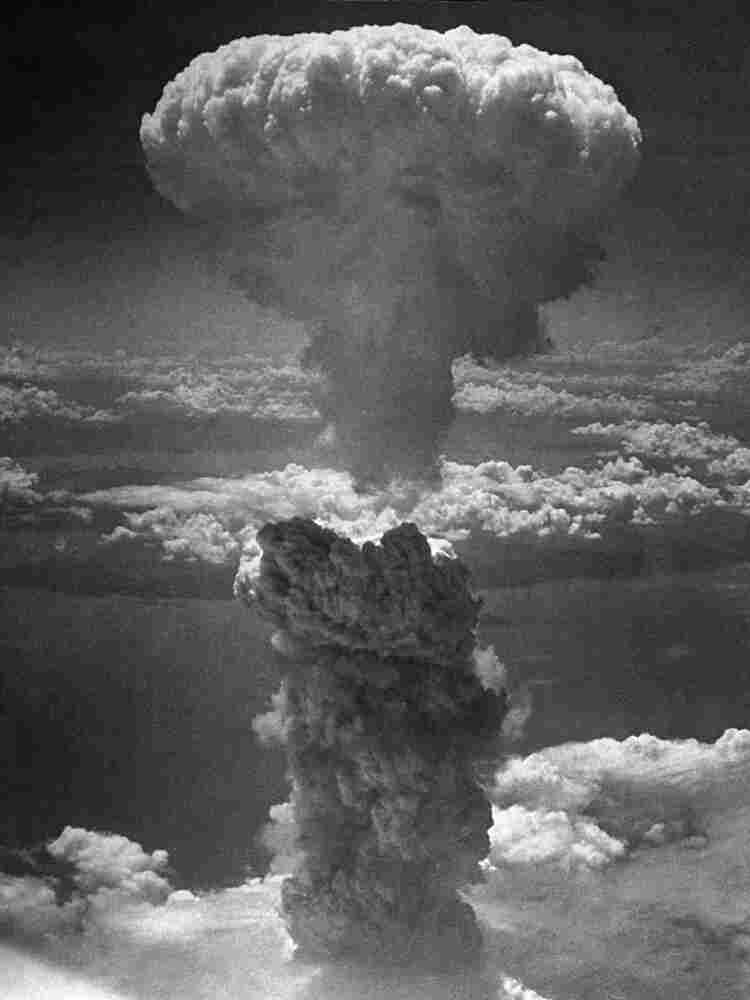 A giant column of dark smoke rises more than 20,000 feet into the air after the second atomic bomb ever used in warfare exploded over Nagasaki, Japan, on Aug. 9, 1945. Dropped by the U.S. Army Air Force's B-29 plane "Bockscar," the bomb killed more than 70,000 people instantly, with tens of thousands dying later from effects of the radioactive fallout. 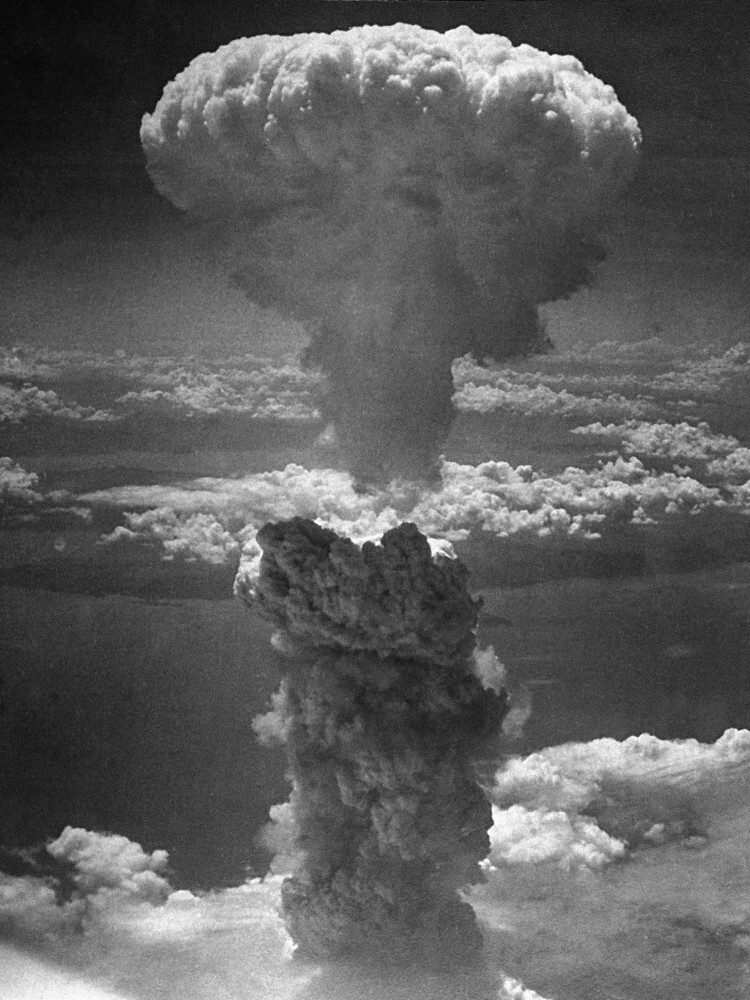 A giant column of dark smoke rises more than 20,000 feet into the air after the second atomic bomb ever used in warfare exploded over Nagasaki, Japan, on Aug. 9, 1945. Dropped by the U.S. Army Air Force's B-29 plane "Bockscar," the bomb killed more than 70,000 people instantly, with tens of thousands dying later from effects of the radioactive fallout.

The idea of an atomic weapons disarmament movement dates back almost as far as the atomic bomb itself. The International Atomic Energy Agency and other groups keep track of key nuclear moments in history. Here are a few:

1946: As early as January — after various scientists call for a ban on atomic weapons and the discarding of those already built — Sen. Millard E. Tydings, D-Md., begins working on a disarmament proposal. He predicts that "so long as competitive armaments exist, the fear of war will hang over the world."

1959: Near the end of the year, the General Assembly of the United Nations — at the behest of Ireland — adopts a resolution urging a Ten Nation Disarmament Committee to consider forbidding countries without nuclear capability from developing it.

1963: Calls in the U.S. for nuclear restraint result in the Partial Nuclear Test Ban Treaty — signed by the Soviet Union, the United Kingdom and the U.S. — which prohibits nuclear testing everywhere except underground. Subsequently, various nuclear-free zones are established, and additional treaties prohibit the testing and deployment of nuclear weapons in outer space and under the sea.

1968: The Nuclear Non-Proliferation Treaty is signed by the Soviet Union, the United Kingdom and the U.S. It goes into effect in 1970.

1972: The U.S. and the Soviet Union sign the Strategic Arms Limitation Talks I treaty, which limits nuclear production.

1987: The U.S. and the Soviet Union sign the Treaty on the Elimination of Intermediate-Range and Shorter-Range Missiles, known as the INF Treaty.

1991: In the summer, the U.S. and the Soviet Union sign the Treaty on the Reduction and Limitation of Strategic Offensive Arms (the START I) to actually begin reducing the levels of their nuclear weapon arsenals. Later that year, further reductions are announced.

1993: The U.S. and the Russian Federation sign the Treaty on Further Reduction and Limitation of Strategic Offensive Arms (the START II), vowing to further reduce their nuclear stockpiles.

2002: The U.S. and the Russian Federation join the Treaty on Strategic Offensive Reductions (the SORT treaty) at the Moscow Summit. They promise to reduce and limit their strategic nuclear warheads to an aggregate number of 1,700 to 2,200 for each by the end of 2012.

2009: President Obama signs a bilateral treaty with Russian President Dmitry Medvedev to lower the deployed-warhead levels of both countries. In a speech in Prague, he reiterates the U.S. commitment to the reduction of nuclear weapons — in the face of increased nuclear capabilities by smaller nations such as North Korea and Iran. "In a strange turn of history," Obama says, "the threat of global nuclear war has gone down but the risk of a nuclear attack has gone up." 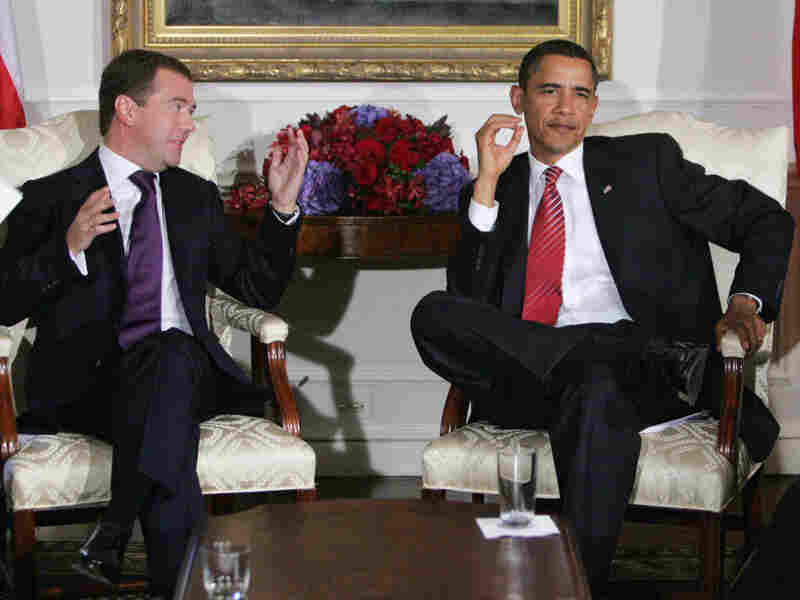 Russian President Dmitry Medvedev and President Obama met in September 2009 in New York City. The two leaders signed a bilateral treaty to lower the deployed-warhead levels of both countries that year. 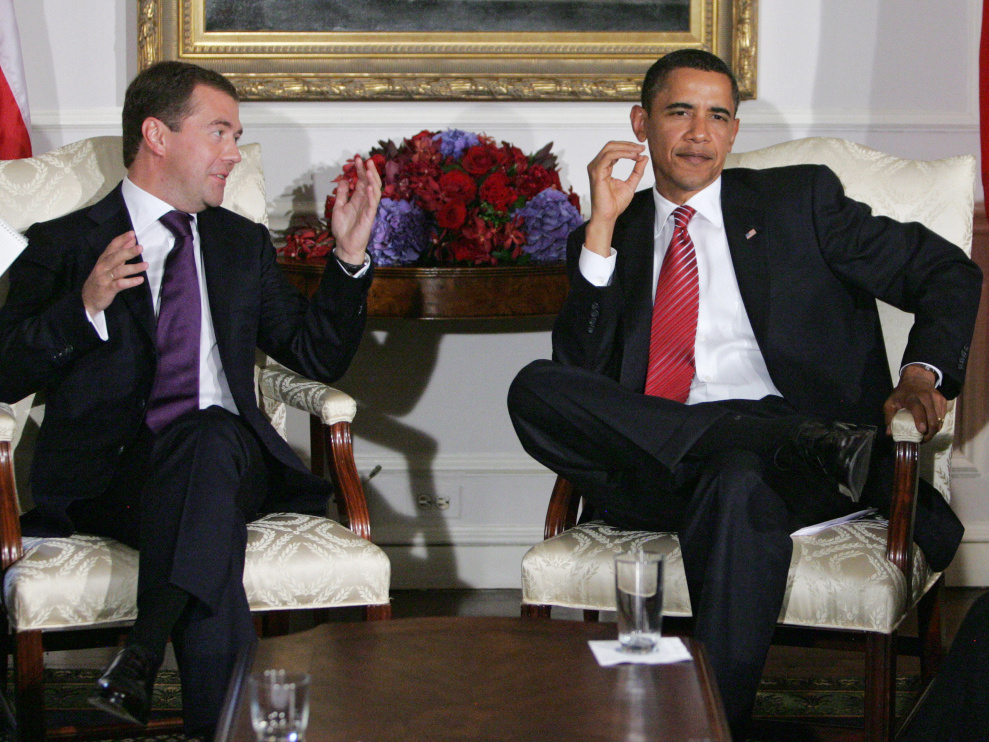 Russian President Dmitry Medvedev and President Obama met in September 2009 in New York City. The two leaders signed a bilateral treaty to lower the deployed-warhead levels of both countries that year.

The convention coincides with the 25th anniversary of the Reykjavik Summit between President Ronald Reagan and Soviet Union leader Mikhail Gorbachev. It is organized by Global Zero, a nonpartisan group hoping to phase out and eliminate all nuclear weapons.

But the multilateral appeal is also appealing to members of the traditional right, people who were once hardliners about America's nuclear might. A cadre of the seasoned signatories include people who served under Reagan, a strong advocate of nuclear deterrence in the 1980s. Reagan's secretary of state, George P. Shultz; Reagan's chief of staff, James A. Baker III; and President George H.W. Bush's ambassador to the United Nations, Thomas Pickering, are scheduled to be at the meeting.

Lawrence S. Wittner, a history professor at New York State's University at Albany, is the author of several volumes on anti-nuclear efforts, including Toward Nuclear Abolition: A History of the World Nuclear Disarmament Movement, 1971 to the Present. Wittner is keeping close watch on the event at the Reagan Library, which he says "is indicative of how much progress has been made in convincing former members of the national security establishment and other world leaders that the maintenance of nuclear arsenals imperils the world."

Over the years, a plethora of peace-seeking citizens' organizations such as Peace Action — successor to the National Committee for a Sane Nuclear Policy and the Nuclear Weapons Freeze Campaign — Physicians for Social Responsibility in the United States, the Campaign for Nuclear Disarmament in Britain and others "have been waging a staunch campaign against nuclear weapons at the grass-roots level," Wittner says. "Now, the advent of Global Zero adds to their campaign by mobilizing people at the elite level."

Other petition signers such as business moguls Richard Branson of Great Britain and Jeff Skoll of Canada; retired Gen. Bernard Norlain of the French Air Force; former Egyptian ambassador to the United States Nabil Fahmy and former Pakistan ambassador to the U.S. Mahmud Durrani are slated to be at the Simi Valley summit. Some 40 student leaders will also be participating.

If all these different people can agree on reduction and removal, this could perhaps give nuclear destruction a whole new meaning — the actual destruction of nuclear weapons.

A variegated raft of reasons is fueling the neo-anti-nuclear push and pulling people to the California confab.

For Richard Burt — appointed by Reagan to be ambassador to Germany in 1985 and by George H.W. Bush as U.S. chief negotiator in the Strategic Arms Reduction Talks in 1991 — the events of Sept. 11, 2001, were a turning point in his perspective on nuclear weaponry. The attacks on U.S. landmarks and people, he says, "underscored in a tragic but vivid way that in the 21st century, nuclear arms are no longer great power weapons. Today, the likelihood of a nuclear war between the United States and Russia or China or other major states is practically zero. Instead, with the proliferation of nuclear know-how and materials, nuclear arms are becoming the weapons of weak states, such as Pakistan; rogue states, such as North Korea; and possibly of terrorist groups, such as al-Qaida."

For Richard Branson — a British billionaire and philanthropist — it's a matter of global priorities. "The $1 trillion earmarked for nuclear weapons over the next 10 years," says Branson, "should be invested in clean technology companies, efficient power generation, job retraining for the 21st century and better education — this huge sum would help lift the world economy and raise global living standards. We need to reset our spending priorities and reset the course toward a world without nuclear weapons."

The Global Zero plan, which calls for the staggered eradication of nuclear weapons worldwide by 2030, comes at a time when some souls may be willing, but some national flesh might be weak. The nine nuclear states — the U.S., Russia, China, the U.K., France, Pakistan, India, Israel and North Korea — are set to spend $100 billion among them on nuclear arms programs this year, according to Global Zero.

But "if Reagan and Gorbachev — at the height of the Cold War — could come together to cut nuclear weapons, today's global leaders should be able to do the same," says Matt Brown, co-founder of Global Zero. "The alternative is that nuclear weapons continue to spread, increasing the risk that through fanaticism, accident or miscalculation they will be used."

Given the enormous dangers posed by nuclear weapons, "nations and people around the world have been grappling for decades with the issue of how to avert nuclear war," says author Lawrence S. Wittner. "And the only guarantee that nuclear war can be averted — in the context of international conflict, war and terrorism — is to eliminate the weapons."

Through international treaties and unilateral action, he says, "substantial progress on eliminating such weapons has already been made, and their numbers have been reduced from roughly 70,000 to somewhat more than 20,000. Polls show that the public has approved of nuclear disarmament — including a nuclear weapons-free world — for decades."

There are no technical obstacles to the abolition of nuclear weapons, Wittner says: "Modern technology is now quite sufficient for extensive and intensive verification of nuclear disarmament by all nations. The real obstacle is political. Nations — and, before their advent, competing territories — have fought wars for thousands of years. And in these wars they have drawn upon the deadliest weapons available to them."

Over the eons, "nations have learned to rely on their weaponry for their national security," Wittner says. Now the question is: "Can they learn to rely on something else for that purpose, such as international cooperation and a strong, effective United Nations? The future of the world may hinge upon the correct answer to that question."