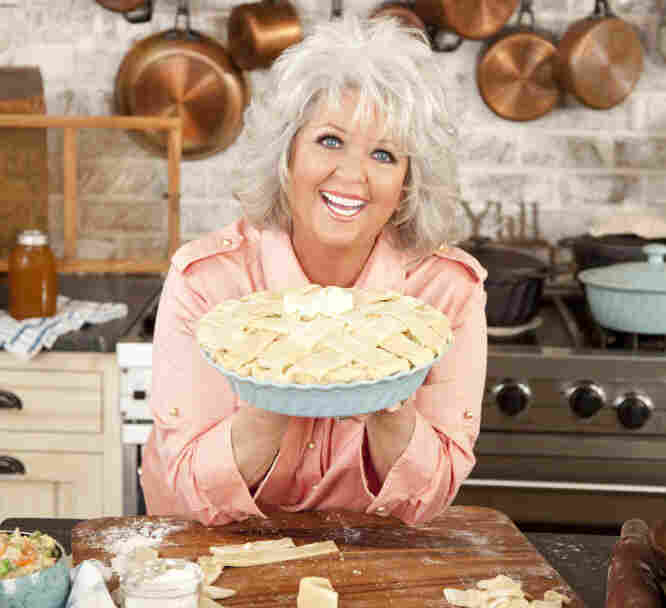 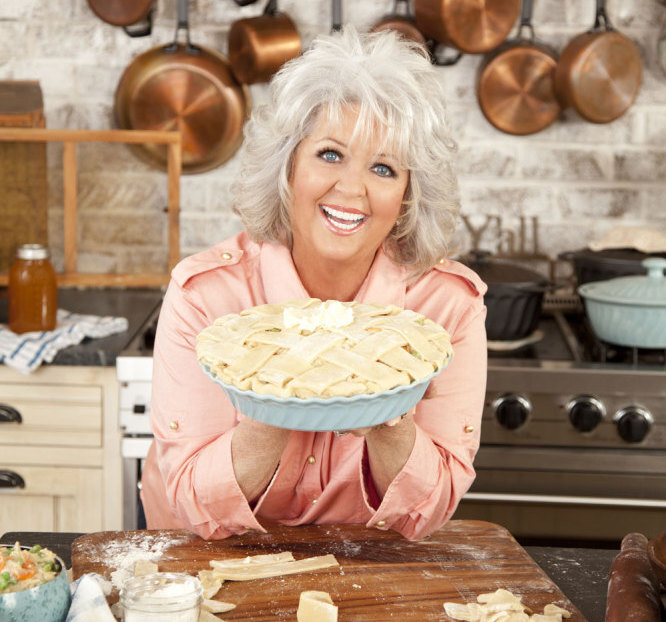 Deen tells NPR's Steve Inskeep that she first discovered some of those variations in her home state of Georgia.

She says that even moving between cities in the same state called for certain culinary adjustments.

"I found that when I went from Albany to Savannah, that I needed to put that white rice away, and I needed to turn that into Savannah red rice because they were big into that sausage, tomato-y, bell pepper-y rice mixture," she says.

Deen says there are still a couple things all Southern cooking has in common. One is a love of seasoning. ("Southerners have never been afraid of seasoning," she says. "It's kind of the other way around; our seasoning is afraid of us.") Another is a love of vegetables. 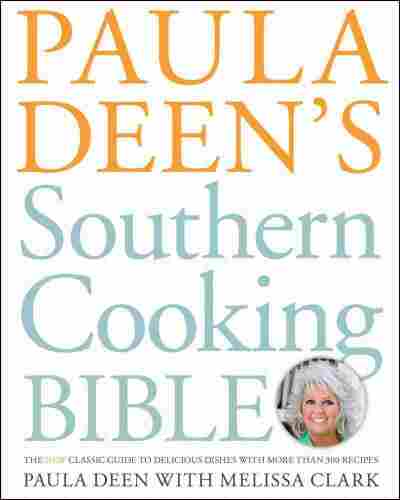 The Classic Guide to Delicious Dishes, with More Than 300 Recipes

"There's nowhere in [the U.S.] that eats more vegetables than us Southern folks," she says. "We love our fresh green beans and new potatoes and fresh butter beans."

In that spirit, Deen's new books includes recipes like Best Braised Southern Greens, which has a lot more than just greens in it — it's also got bacon, hot sauce and, naturally, a stick of butter.

"I figure it's almost like a balance," Deen says. "We're eating these wonderful collard greens and turnip greens which are so medicinally good for you and, OK, so what if it has a little ham hock in it?"

After all, is it still Southern cooking without the bacon and the butter?

"Maybe a cheatin' version," she says.

Just as important as bacon and butter is that classic Southern staple, grits. Deen has her Cheese Grits recipe down to a science; she's got a handful of tips for expertly executing the dish.

The first is to make sure you salt the water before you add the grits. She also advises putting some butter in the water, "just like when you cook your pasta you put a little olive oil in your water so it won't get gummy and stick together." Lastly, she says you should whisk the grits for about two minutes in boiling water. ("If you turn your back and don't stir them, then you got a pot of golf balls," she says.) Then it's time for some final touches.

"You got to add a little milk at the end of your cooking time. And sometimes I will accidentally trip when I'm walking across the kitchen with a block of cream cheese, and it falls in there," she jokes. "You just have to go with it and say, 'Oops!'"

The Meaning Behind Chicken And Dumplin's

Deen has spent so much of her life in the kitchen that it seems inevitable that she would associate certain foods with certain people, like her grandmother.

"My grandmother would fry the best fish roe and serve it to us in the morning with scrambled eggs and grits," Deen recalls.

Another classic family dish is Chicken and Dumplin's. The recipe isn't hard, Deen says, but it is physically tiring.

"Grandma taught me that you have to make a tough dumpling. You want to be able to cut it with your fork, and in order to do that you have to mix your flour and your salt along slowly with ice water," she says. "That's a hard ball that you're having to work with, and it probably takes me 30 minutes to roll out that hard ball but I know when I do that that I've got them right."

The work's worth it because of what the dish means to Deen, who lost her father when she was just 19.

"My daddy's favorite meal was Chicken and Dumplin's," she says.

When he died, Deen went to her grandmother with an important request.

"I said, 'Grandmama, I've got to learn how to make your Chicken and Dumplin's,'" Deen recalls, "'just in case this is a bad dream and my daddy comes back.'" 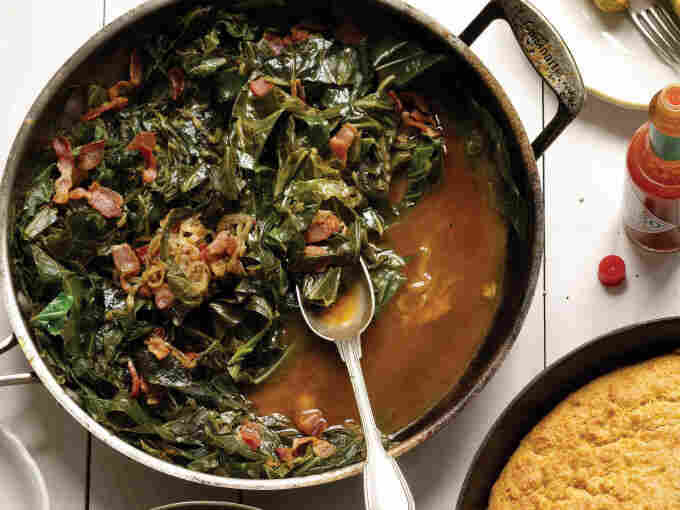 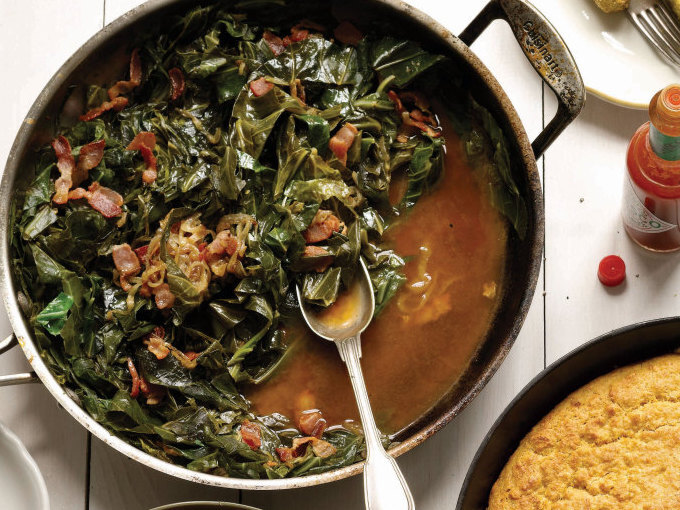 As far as I'm concerned, in order to cook good greens, you have to grease 'em a little with bacon or butter, or — y'all know me — both! I love how after a nice braise, this traditional mess o' greens gives you that delicious pot liquor — the tastiest, healthiest broth at the bottom of the braising pot. You can serve that broth with corn bread or hoecakes to soak it up, or just slurp it up in the kitchen all by itself in a cup. I had an elderly gentleman who came into the restaurant regularly and never needed to order. I would just bring him a coffee mug full of pot liquor. It'll cure whatever ails you.

2. Add 2 cups water and bring to a boil. Reduce the heat to medium-low and simmer for 10 minutes. Add the collard greens and cook, uncovered, until very soft, about 20 minutes. Season with salt and hot sauce to taste. Place the greens in a pretty serving bowl along with the pot liquor and set out on the table.

Like most Southerners, I cannot get enough of hearty greens like collards, turnip greens and mustard greens. Here's a quick way to prep 'em. First, use this trick to trim out the thick stem (sometimes called a rib) in the center of the leaves: Fold the leaves in half and, starting from the top, at its thinner end, pull the stem away from the leaf. Or lay the leaves down flat on a cutting board, make a cut down either side of the stem, and cut out the stem. Roll the leaves up (the long way) like a cigar and then slice them crosswise to create strips.

I never saw a dumplin' I didn't like. And I especially love chicken and dumplin's because it was my daddy's favorite dish. When he passed and I asked my grandmama for the recipe, she taught me how to do rolled dumplin's like these. To make them correctly, you mix your dough with ice water, then roll it out real thin on the kitchen table. It takes some elbow grease: What you want is a dough that puts up a little bit of a fight, so you end up with a real thin, tough dumplin' you have to cut with a fork. That gives you a nice chew, and it's the secret to this recipe.

2. To make the dumplings: In a medium bowl, mix the flour with the salt and mound together. Beginning at the center of the mound, drizzle about 2 tablespoons of ice water over the flour. Using your fingers, and moving from the center to the sides of the bowl, gradually drizzle the flour with about 3/4 cup ice water and incorporate. Knead the dough and form it into a ball.

3. Dust a small handful of flour onto a work surface. Roll out the dough (it will be firm), working from the center, until it is 1/8 inch thick. Let the dough relax for several minutes.

4. Once the dough is nice and relaxed, cut it into 1-inch squares. Pull each piece in half and drop the halves into the simmering soup. Do not stir the pot once the dumplings have been added or they may break apart. Instead, gently move the pot in a circular motion so the dumplings become submerged and cook evenly. Cook until the dumplings float and are no longer doughy, 3 to 4 minutes.

5. To serve, ladle the chicken, gravy and dumplings into warm bowls.

If the chicken stew is too thin, it can be thickened up before the dumplings are added. Simply mix together 2 tablespoons cornstarch and 1/4 cup water, then whisk this mixture into the stew and cook until it reaches the desired consistency.

In the South we laughingly call this redneck caviar, because a lot of poor folks couldn't afford caviar spread to set out with their crackers and we just thought black-eyed peas would make a perfectly good substitute. And do you know what? I think they're even better! For one thing, fish eggs taste pretty awful on tortilla chips. But this mix of beans, spicy Ro*Tel tomatoes (a Southern staple that I am seeing more and more in supermarkets across the country), and Italian dressing makes for a dip that is classy in its own special way.

1. In a large serving bowl, mix together the black-eyed peas, corn, tomatoes, bell pepper, jalapeno pepper, onion, Italian dressing and pimientos. Cover and refrigerate for at least 4 hours or overnight to let the flavors come out. Serve with tortilla chips or crackers for dipping.

If you're chopping fresh chilies, you want to have some respect for those little seeds and white veins inside, because that's where all the spice is, and it will burn your hand just like it burns your mouth. To play it safe, wear latex gloves to chop the chilies, then wash your knife and board right away. If you want it real hot, chop the whole chili, seeds and all; but to tone it down, first scrape the seeds and white veins away and discard them, and then chop the chili.

I enjoy plain old grits so much, I might neglect to make these delicious cheesy baked grits. But cheese makes these simple grits so luxurious and silky, I could eat the whole mess if I didn't have to share 'em. Stone-ground grits are wonderful, but because they take so long to cook, I usually go with quick cooking grits — which I also love. But I never make the instant kind — some things a Southerner just won't do!

2. In a medium saucepan, bring 4 cups water to a boil. Slowly whisk in the grits and salt. Whisk constantly for 1 minute. Reduce the heat, cover, and cook for 20 minutes, or until the grits are thick and creamy.

3. In a small bowl, lightly beat the eggs. Take about 1 tablespoon of the hot cooked grits and whisk it into the eggs. Stir the warmed eggs back into the pan of grits and stir well to combine. Stir in the butter, cheese, garlic, and cayenne pepper.

4. Spoon the mixture into a 2-quart baking dish. Bake for 45 minutes. And go ahead and top the casserole with some extra grated cheese in the last 5 minutes of baking, because you just can't get enough of a good thing.

I tell you, eggs are a temperamental food! They have a nasty habit of scrambling on you when you're adding them to something that's hot. In order to avoid that mess, you need to "temper" them before adding them to a hot food. That's what you're doing in this recipe when you add that tablespoon of hot grits to the eggs before pouring the eggs into the pan. You're just bringing the temperature of the eggs closer to the temperature of the hot food. Then, when you add the "tempered" eggs to the pan of hot grits, be sure to stir well and constantly so the eggs can get used to the hotter temperature.