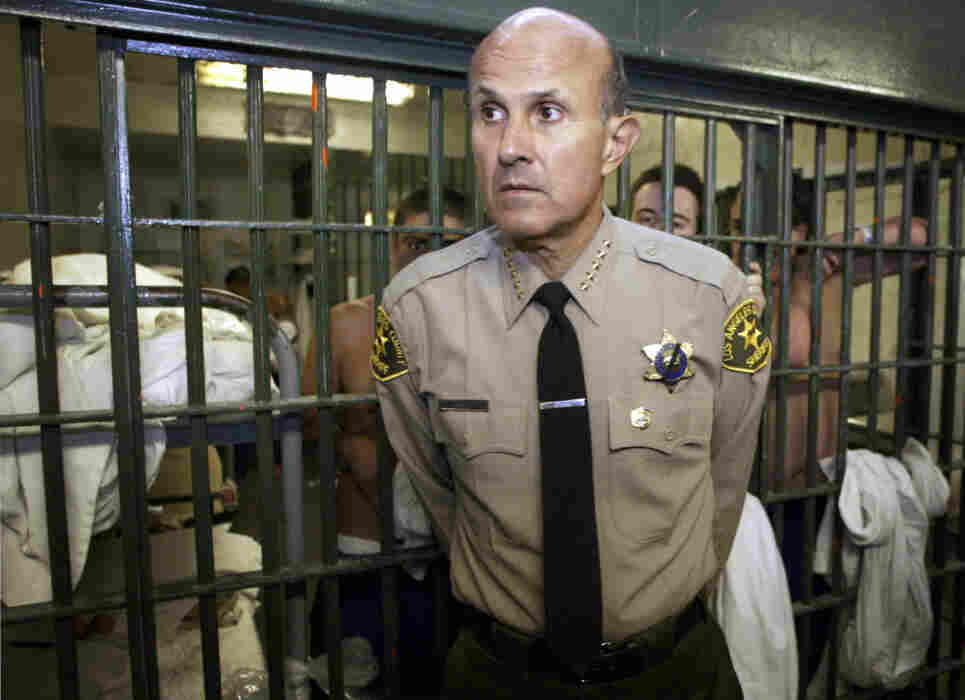 Longtime Los Angeles County Sheriff Lee Baca is under pressure to resign over accusations that he turned a blind eye to widespread abuse of inmates by his deputies.

At the Los Angeles County Men's Central Jail, volunteers testified that they had seen inmates being abused by deputies. Here are parts of their sworn declarations gathered by the L.A. Times last month.

Baca spent days blasting his critics, including the FBI, which ran a sting operation in one of his jails. Flanked by dozens of his top brass last week, Baca told reporters allegations of abuse were being exaggerated.

Tuesday, he toned down his defiance. Now the four-term sheriff says he's instituting reforms and will open his cell doors to independent inspectors.

"I'm going to continue to receive the criticism as positively as I can, but I'm not going anywhere," Baca said at a small church near downtown Los Angeles, where about a dozen black activists gathered to show their support for the sheriff.

"I just want the community to know he's not resigning," Sandra Moore of Concerned Citizens for Fair Policing said. "We will not allow it. He's not going anywhere."

Moore praised Baca for being a true humanitarian and slammed his critics for not trusting him to right his own ship.

"We are going to work with him side by side," Moore said. "Before you say the house is on fire, tell the firemen."

Baca says he understands there are problems of excessive force in the jails. He says his deputies have a tough job maintaining order in the county's overcrowded and antiquated facilities, but he's showing them how to do better.

"My admonition to my own deputies is, 'You will never find me disrespecting an inmate and therefore I'm asking you to not disrespect an inmate,'" Baca said.

Baca has held town hall-style meetings with inmates over the past two weekends. He says he set up a 35-member task force of internal investigators to look into abuse allegations and that he will now be given information directly about all inmate concerns.

But Peter Eliasberg of the American Civil Liberties Union, which has long complained about abuse in the jails, says Baca's promises ring hollow.

"The sheriff's department has shown itself unable to police itself in the past," Eliasberg said. "It is amazing to me that Sheriff Baca is saying, 'Gee I didn't really know about this stuff before, but now I'm really going to pay attention.'"

Eliasberg says the sheriff needs to step down and federal authorities need to come in, investigate and order reforms. A federal court has placed an ACLU observer in Los Angeles' biggest jail.

The FBI says it's investigating several allegations, including one witnessed by the ACLU's monitor. The Civil Rights Division of the Justice Department is also looking into allegations of racial discrimination by sheriff deputies in northern Los Angeles County.

For now the County Board of Supervisors is backing the sheriff. Supervisor Zev Yaroslavsky says he hasn't lost confidence in Baca, but he does want an independent review of the jails. But he wants retired local officials to do it, not the feds.

"If the department doesn't get its act together, then I think we're inviting a federal takeover, a consent decree — the kind of thing that the LAPD had which was long, costly and ultimately successful but very disruptive in the meantime."

Baca says he's willing to let anyone who wants to come into his jails, but he'll be the one to make any necessary changes.

"Let's not just look at what's happened in the past and try to account for it. Let's go forward and build a better future for inmates and deputies alike," Baca said.

The future for Baca and his deputies is about to get even more challenging. The state is under court order to slash its prison population by 30,000. For the county and Baca that means thousands more inmates will be staying in Los Angeles' jails.