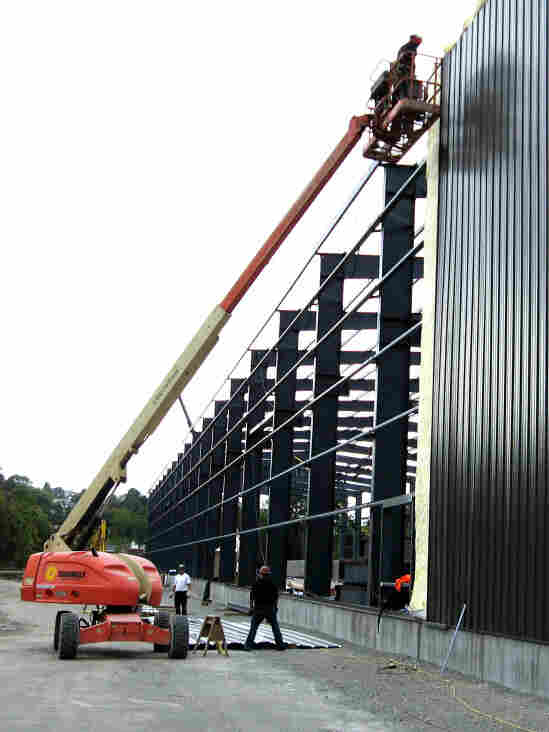 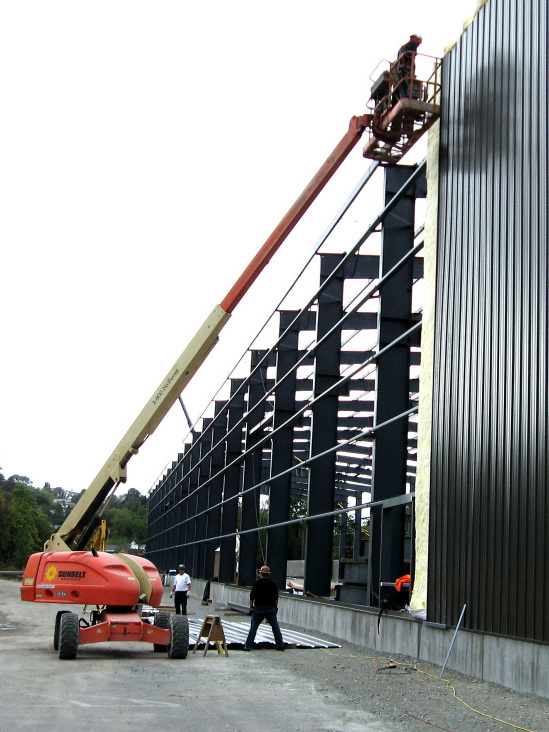 Workers at a $6 million fabrication shop under construction at Chapman Corp. in Washington, Pa.

A natural gas drilling boom in Pennsylvania is helping the economies of Rust Belt cities long accustomed to bad news. Drilling requires steel — lots of it — and that has manufacturers expanding and hiring new workers.

While much attention has been paid to the environmental risks of drilling into the Marcellus Shale, the economic benefits have been less prominent in the national discussion. But in Youngstown, Ohio, locals have been watching an old industry come back to life.

The Brier Hill neighborhood, northwest of downtown Youngstown, has been relatively quiet for the past few decades since the huge steel mills there shut down. But today it's noisy again, with trains passing each other on the tracks and heavy construction under way.

"What's really exciting to me is that for many, many years this area was the poster child for the Rust Belt economy," says Walter Good, vice president of economic development for the Youngstown/Warren Regional Chamber.

It's his job to attract new companies, and the natural gas drilling boom in nearby Pennsylvania is making that a lot easier.

Controversial technologies like hydraulic fracturing, combined with horizontal drilling, allow production companies to now bring vast quantities of gas up to the surface.

In January through August of this year, 1,242 wells were drilled into the Marcellus Shale in Pennsylvania alone. Each one needs thousands of feet of steel pipe.

That's why the French company Vallourec is building a new $650 million mill in Youngstown. The green-roofed facility is huge — about 1 million square feet.

Joel Mastervich, the president and COO of Vallourec's U.S. company, V&M Star, says Youngstown was an attractive place to build the new seamless pipe mill because the infrastructure and experienced workforce are already in place. Plus, it's close to the Marcellus Shale.

"We'll be able to produce the pipe, finish it here and send it to a customer that's, maybe, 100 miles away," says Mastervich.

Production is expected to begin in a few months, but already the Brier Hill neighborhood is perking back up. Stacey Seidita recently opened a sandwich shop in a brick building that had been empty for years.

With about 1,000 construction workers building the mill and the promise of 350 permanent workers down the road, launching her business now made sense.

"My father's a contractor and he's been telling me for a little while that V&M is going to really start, so that's when I found this building and decided it was time," says Seidita. 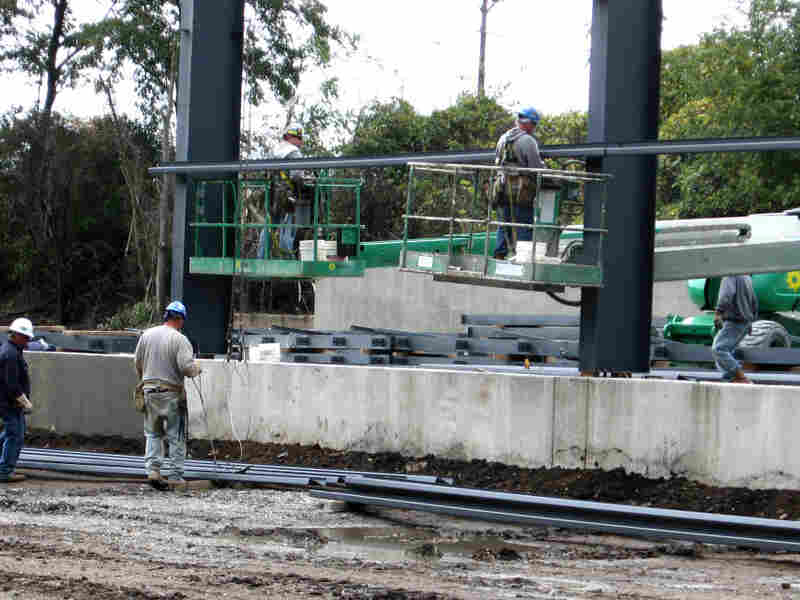 Chapman Corp. is expanding to take advantage of extra business it expects to get in coming decades because of increasing production in the Marcellus Shale play. Jeff Brady/NPR hide caption 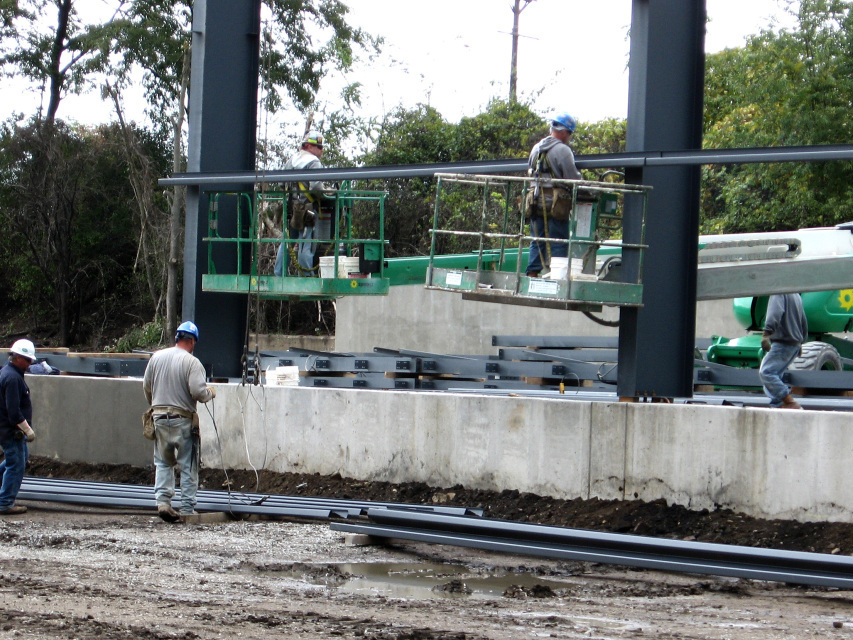 Chapman Corp. is expanding to take advantage of extra business it expects to get in coming decades because of increasing production in the Marcellus Shale play.

Around the region, you can find many stories of businesses doing well because of the drilling boom — especially in Pennsylvania. U.S. Steel executive Doug Matthews says he had difficulty finding a hotel room in the small town of Williamsport last winter.

"That was a little bit surprising," he says.

Matthews is the senior vice president of tubular operations at U.S. Steel — his division makes the pipes and tubes the gas drilling industry uses.

U.S. Steel is based in Pittsburgh and is still a big driver for the local economy. When it does well, so do its contractors, like Chapman Corp. in Washington, Pa.

Crews there are building a large new fabrication shop, as many engineering and construction firms are laying people off.

"The $6 million investment that we're putting into our new fabrication facility shows our confidence that the Marcellus Shale play is here to stay," says Rich Tomsic, vice president for sales and marketing.

That almost certainly will lead to more jobs in the region. It already has at a time much of the rest of the country is suffering.

The $6 million investment that we're putting into our new fabrication facility shows our confidence that the Marcellus Shale play is here to stay.

Pennsylvania's Department of Labor and Industry collects specific data on how many people have been hired because of the natural-gas drilling boom. Hiring for "core-related industries" has spiked from 5,501 in 2008 to 11,913 this year.

"This is almost 117 percent growth," says Sue Mukherjee, director of the agency's Center for Workforce Information and Analysis.

Mukherjee says 71 percent of the new hires have been Pennsylvania residents and the jobs pay well — $76,000 a year, on average.

Her statistics show an uptick in jobs related to gas production, too, such as truck drivers, civil engineers and mechanics.

New jobs also are being added in areas you might not imagine at first. This summer the Sierra Club hired Deb Nardone to direct its Natural Gas Reform campaign in Pennsylvania.

Nardone says she'd like to see the state hire more regulators to look over the shoulders of drillers.

"And also an increase in staff that are doing research ... collecting good science ... [and] monitoring the environmental impacts, whether it's air quality or water quality," she says.

But while there are plenty of profits for the natural gas industry to hire new employees, nonprofit groups and state governments are having a much tougher time finding money to do that.