Accessibility links
Movie Review - 'Fireflies In The Garden' - It's No Party, This Bunch A full-on family brawl is the kind of fodder that makes for a good time at the movies, at least when all the elements are in place. Critic Ella Taylor reports that despite its A-list cast, Dennis Lee's high-octane melodrama doesn't quite catch fire.

Constant 'Garden'-er: A diligent mom (Julia Roberts, with Cayden Boyd) struggles to hold together a family dominated by an overbearing father and rocked over the years by conflict and tragedy.

Fireflies In The Garden

A big old family brawl is my idea of a good time at the movies, but where do you go to find one these days? The high-octane American domestic melodrama — bursting with vengeful or victimized divas, chock full of tears, hysteria and the rending of garments — pretty much died out with the great maternal weepies of the mid-20th century. The closest we get to a Douglas Sirk among filmmakers these days is Todd Haynes, who carried the torch with Far From Heaven, his rapturous 2002 homage to Sirk, and with last year's miniseries remake of Michael Curtiz's 1945 Mildred Pierce. Both fared better with critics than with the public; meanwhile television soap operas, the last refuge of scheming dowagers and their psycho progeny, are dropping like flies.

From 'Fireflies In The Garden' - 'I'm Sorry'

But it's not as though domestic life has grown happier or more stable in the past half century. Perhaps we've grown too queasily psychobabblish about the family to commit to the agony and ecstasy of full-bore melodrama — hence the wanly clinical term "family dysfunction" to describe the collapse of home and hearth.

Small wonder, then, that despite a top-drawer cast, Fireflies in the Garden gathered dust for three years before being recut and released by its own producers. A fatally downbeat chamber piece about a crumbling Midwestern clan, written and directed by newcomer Dennis Lee and loosely drawn from his own home life, Fireflies isn't terrible. And as shot by Danny Moder (Mr. Julia Roberts) and edited by the late, great Dede Allen with Robert Brakey, it has a suitably glum atmospheric sheen. But as melodrama goes, it's more Greer Garson than Joan Crawford.

That's a shame, given that Julia Roberts has salt and vinegar enough (see Erin Brockovich) to fill the shoes of Crawford, Bette Davis or any of the neurotic divas of Hollywood's heyday. But she's hopelessly miscast and treading water as Lisa, the apparently selfless mom who tries to hold her young family together even as her abusive husband (Willem Dafoe, leading with his jaw) threatens to unravel it.

Fast forward to the present and the arrival of their prodigal son Michael (Ryan Reynolds), a romance novelist bearing a red-hot tell-all manuscript for his latest book. Buried under a bushy beard that fairly shrieks "literary type," the actor gives excellent nervous and bitter, and he's the lone source of saving comedy in an otherwise dour scenario. But Reynolds, an understated ironist with one eyebrow permanently raised, is simply not built for sobbing in empty churches, or for soothing the savage breast of a boy whose current miseries mirror his own childhood sufferings. Still less is he made for swatting fireflies with a tennis racket in the company of ecstatic minors. 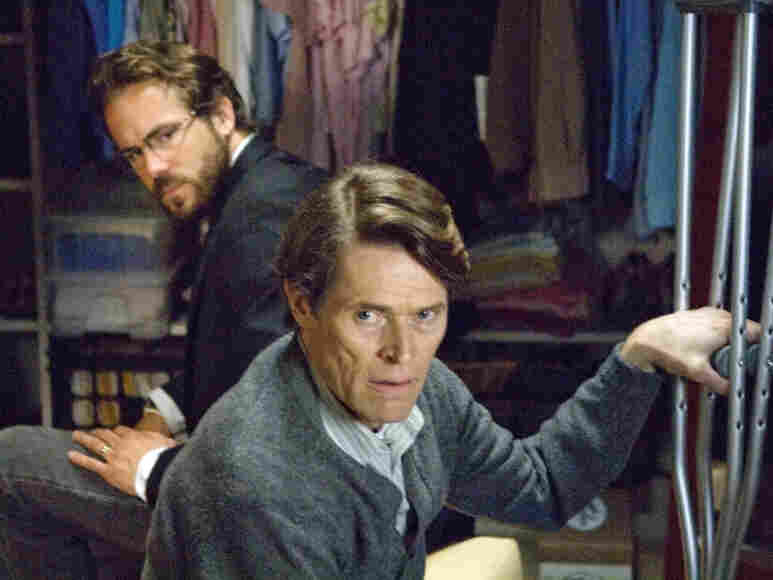 As an adult, novelist Michael (Ryan Reynolds) channels his lifelong resentment toward his father (Willem Dafoe) into a literary score-settling. 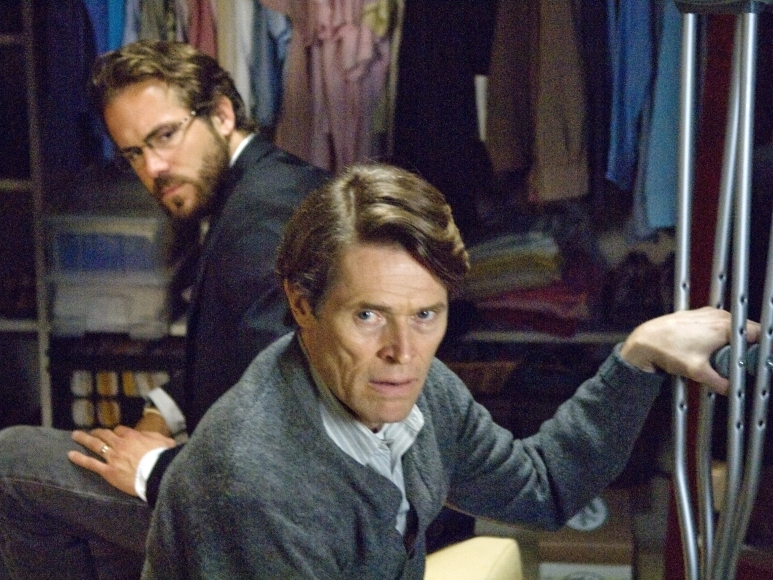 As an adult, novelist Michael (Ryan Reynolds) channels his lifelong resentment toward his father (Willem Dafoe) into a literary score-settling.

Mercifully, we are spared the statutory Thanksgiving dinner, but the movie is littered with other fraught family repasts. A tragic event opens up old wounds that might build to a satisfying showdown, if only major healing weren't lumbering up the garden path in plain sight. Scuppered by gratuitous exposition, Fireflies shuttles sedately between flashbacks that set up Michael's early sorrows and its spillover into a wan faceoff with his estranged father — a tenured professor, failed novelist and disappointed son-of-a-bitch — that's plainly headed for mature resolution on all sides.

A few more histrionics, a nice thunderstorm or three, might have upped the passion ante enough to hold attention. But what's really missing from Fireflies is the kind of feminine fire and flash that's meat and drink to melodrama. From boyhood, Michael has been surrounded by women, not one of them powerful or striking enough to shield him from becoming an emotional cripple: not a free-thinking aunt, played as a young woman by Hayden Panettiere and by a criminally underused Emily Watson as an adult; not Carrie-Anne Moss in an undercooked role as Michael's former wife; certainly not a there-there mother who can't protect him from his father's lacerating tongue.

At the very end, Lee throws in a twist in an effort to liberate Roberts' Lisa from a wifely passivity rarely seen since Watch on the Rhine. But it's too little, too late in the bloodless day for us to care.