Accessibility links
Naked Mole Rat's Genetic Code Laid Bare The piggy-nosed, coldblooded animals are neither rats nor moles. But scientists hope the naked mole rat's newly sequenced genome may offer insights into not only aging but also cancer and other diseases. 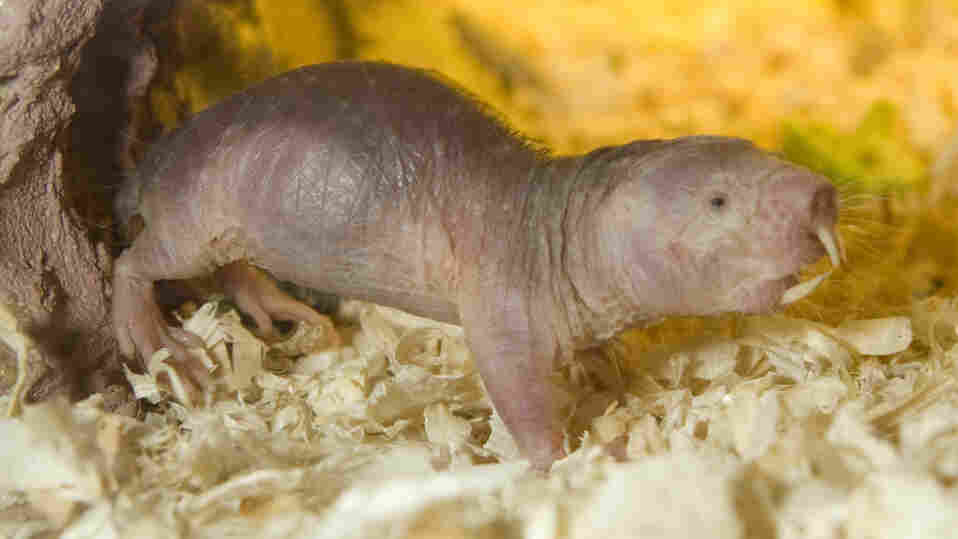 Researchers hope the naked mole rat's newly sequenced genome may offer insights not only into aging but also cancer and other diseases.

Lists of the world's ugliest animals sometimes include the naked mole rat. But scientists who have just analyzed its entire genetic code say this bizarre little creature has an inner beauty — unique traits that could aid research on cancer and aging.

Naked mole rats are neither moles nor rats, although they are naked. They have tiny eyes and piggy noses and have been described as looking like sausages with teeth.

"I think when you get to know them, or if you see them in real life, they take on a very cute quality," says biologist Thomas Park, who has a couple of hundred scampering through tunnels at his lab at the University of Illinois, Chicago.

Normally, these rodents live underground in eastern Africa, tunneling in search of tasty roots that they share with their colony. Like social insects such as bees, naked mole rats live in cooperative groups with one queen who has all the babies.

And if you pick one up, says Park, your hands will immediately feel another of the naked mole rat's distinctive features: Despite being a mammal, they are cold-blooded.

"They take on the temperature of the room, so at room temperature, it feels like you're holding something that's not alive," says Park. "It's very extraordinary."

What's more, Park adds, "they don't feel certain types of pain. And they don't get cancer." And because they evolved to exist in crowded, cramped tunnels with little air, they're able to survive on remarkably low levels of oxygen.

Plus, they also can live for around 30 years, far longer than mice or rats.

So naked mole rats would seem ideal for biomedical scientists who want to learn how to do things like prevent cancer, or slow down aging, or protect the brain from oxygen deprivation during strokes.

This is why researcher Vadim Gladyshev of Harvard Medical School became so fascinated when he first heard of these animals a few years ago at a dinner party. He realized that for the science of naked mole rats to really move forward, biologists would first need to know all of its genes, so he put together an international team to quickly do it.

"We decided, 'OK, let's go full force and just sequence the genome,' " says Gladyshev. "Because the genome is really critical in order to understand the biology of that animal."

They used the DNA of a 4-year-old male from the Chicago lab. The job took about a year and a half.

"At this point, we have a genome and we have done a preliminary analysis. The findings are very interesting — a number of interesting leads — and we will continue working on them," says Gladyshev.

For example, since naked mole rats are cold-blooded, he says they looked at genes that help regulate body temperature. "We found a gene which changed specifically in naked mole rats, not in other mammals," he explains.

They found other changes in genes possibly linked to life span, body hair and cancer, according to their report in the journal Nature.

Now that there's a list of intriguing genes, scientists can try to figure out exactly what they do.

"It's up to the labs to take these findings and to take these analyses and go to the lab and test them experimentally," says Joao Pedro de Magalhaes, a biologist at the University of Liverpool in England who is part of another team that has been working to decode the naked mole rat's genes.

He called the new analysis "an excellent and hugely important work" for establishing the naked mole rat as "the first model of resistance to chronic diseases of aging."

And he says having the full genetic code should get more scientists interested in studying naked mole rats. "It certainly makes things much easier for researchers to work on the naked mole rat," he says.

For example, he says they could study genes in isolated cells or even put them into mice — a lab animal that's a lot more familiar to scientists than these odd, buck-toothed creatures.