Accessibility links
Super(secret)committee's Silence May Be Progress On Capitol Hill, the Joint Select Committee on Deficit Reduction has gone silent for the past month. The 12 members have been meeting behind closed doors — sometimes all together, sometimes in smaller groups — to try to hammer out a deal on future budget cuts. 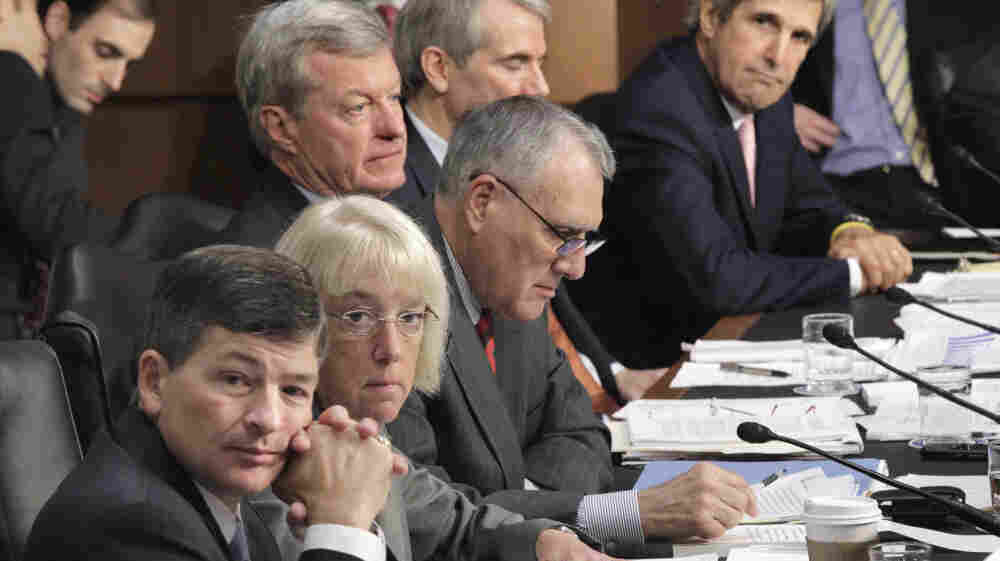 The debt reduction supercommittee had its first public meeting three weeks ago. The committee has been largely silent since then, and this may be a sign of progress.

On Capitol Hill, the Joint Select Committee on Deficit Reduction has been very quiet. Also known as the supercommittee, it was created by Congress this summer and is tasked with finding at least $1.2 trillion in cuts over the coming decade. But, so far, its members are keeping their ideas for doing that on the down-low — and that may be a good sign.

It's been weeks since the committee had an open hearing. In fact, it's only had three meetings total — the first of which was to set up its rules.

In those rules, the panel is required to hold to the same standard of transparency that every congressional committee does — except for the classified ones. They're open to the public and the press, and often broadcast on the Web.

So why haven't you heard from the supercommittee in weeks?

As the co-chairs were setting up the rules in that first meeting, Washington Democratic Sen. Patty Murray turned to Texas Republican Rep. Jeb Hensarling, to clarify the definition of the word "meeting."

The use of the term "meeting" in these rules has the same traditional meaning and does not include less formal caucuses or working sessions.

"The distinguished co-chair is correct, that reflects our understanding as we have been working on this particular rules package," Hensarling said.

In plain English, the supercommittee may meet and work in private as much as it likes as long as it doesn't vote or act in any official capacity.

For several weeks now, the 12 members have been meeting behind closed doors — sometimes all together, sometimes in smaller groups — to try to hammer out a deal on future budget cuts.

That means rank-and-file lawmakers of both chambers know very little about what's going on. For them, its name might as well be the supersecret committee.

"We need to have an open process where the American people can have a voice," says South Carolina Republican Rep. Joe Wilson.

He worries the supercommittee will recommend further cuts to the military — and that Wilson won't have a chance to protest such cuts, "till the last minute."

On the other side of the aisle, Democratic Rep. Elijah Cummings is also concerned.

"When you have 12 members of Congress acting on behalf of 535, it begs for openness," Cummings says.

But Cummings also understands why the supercommittee is operating in deep silence.

"It's because they feel that they can be more effective and efficient in what they're doing," Cummings says. "I know that they're getting phenomenal pressure."

The pressure is coming from every lawmaker with a program they don't want cut, every industry protecting its interests and from local governments worried about their own budgets.

Congressman Trey Gowdy is a member of that huge class of freshman Republicans in the House. Before that, he was a local prosecutor in South Carolina.

Gowdy and several other members say by operating in secret, the supercommittee members don't have to constantly justify their positions to outside interests. And if they did operate in public? It could be a disaster, says Missouri Republican Rep. Jo Ann Emerson.

"Public meetings put members in the position of having to take particular positions that look good to the public but aren't necessarily productive in trying to come up with a solution," Emerson says.

So really, the fact that nothing is coming out of the supercommittee could mean the members of it are staying true to its purpose — trying to make it work.

Debt Committee's Fail-Safe Might Already Be Undone Oct. 3, 2011
Americans Say They Are Dissatisfied With Washington Oct. 3, 2011
A Potential Superhero For The Supercommittee Sept. 13, 2011