Accessibility links
Tracking The Media's Eye On Occupy Wall Street At first, the complaint from the left was that news organizations had ignored the movement. But as they swung their gaze, journalists weren't quite sure how to characterize what they saw. Lacking easy labels, Occupy Wall Street proved difficult for the media to categorize — and to cover. 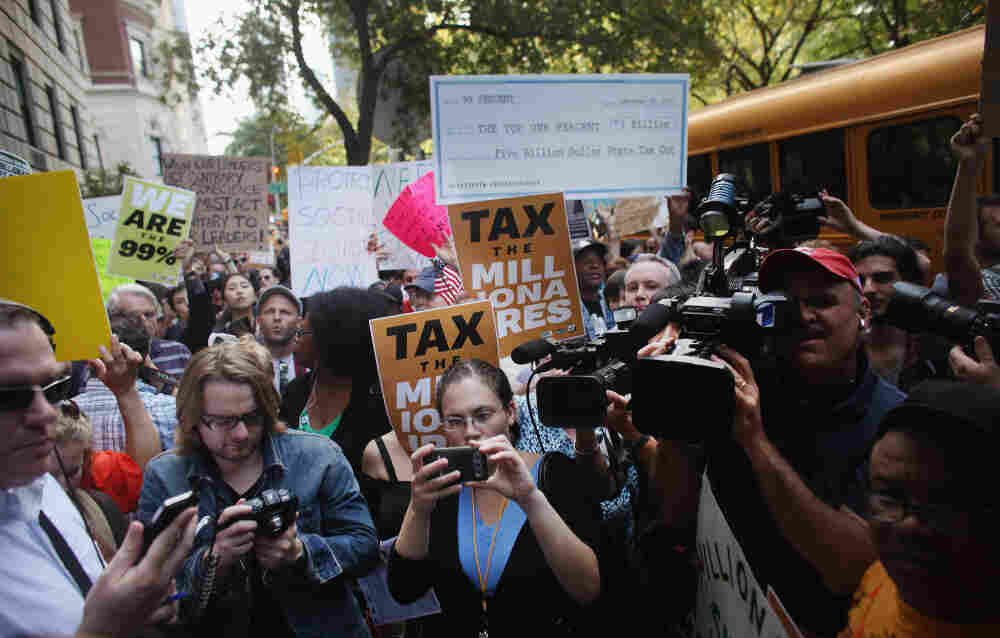 Protesters with Occupy Wall Street march along New York's 5th Avenue, where prominent heads of major business and financial institutions live, on Tuesday. The movement has expanded, along with media coverage. 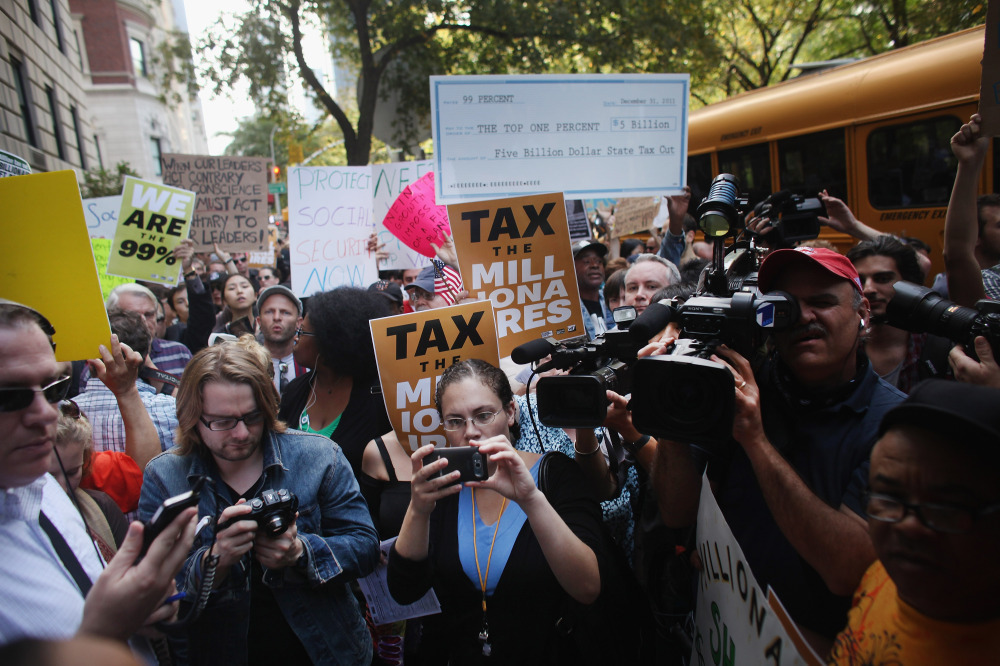 Protesters with Occupy Wall Street march along New York's 5th Avenue, where prominent heads of major business and financial institutions live, on Tuesday. The movement has expanded, along with media coverage.

In recent days, the Occupy Wall Street protests appear to be gathering steam, spreading beyond New York City to other cities across the country. The growing reach of the demonstrations has added to the pressure on journalists to figure out how to cover them.

At first stretch, the complaint from the left was that news organizations had ignored the movement. But as they did swing their gaze, journalists weren't quite sure how to characterize what they saw. Was Occupy Wall Street a movement, political theater or an expression of anguish?

Conservatives and liberals alternately attacked major news outlets for giving the protests too much attention — or too little — compared to the conservative Tea Party activists last year. NPR was not immune.

Some examples of rival strains of coverage surfaced on the same day earlier this month. CNBC's Lawrence Kudlow suggested the protests were unpatriotic. 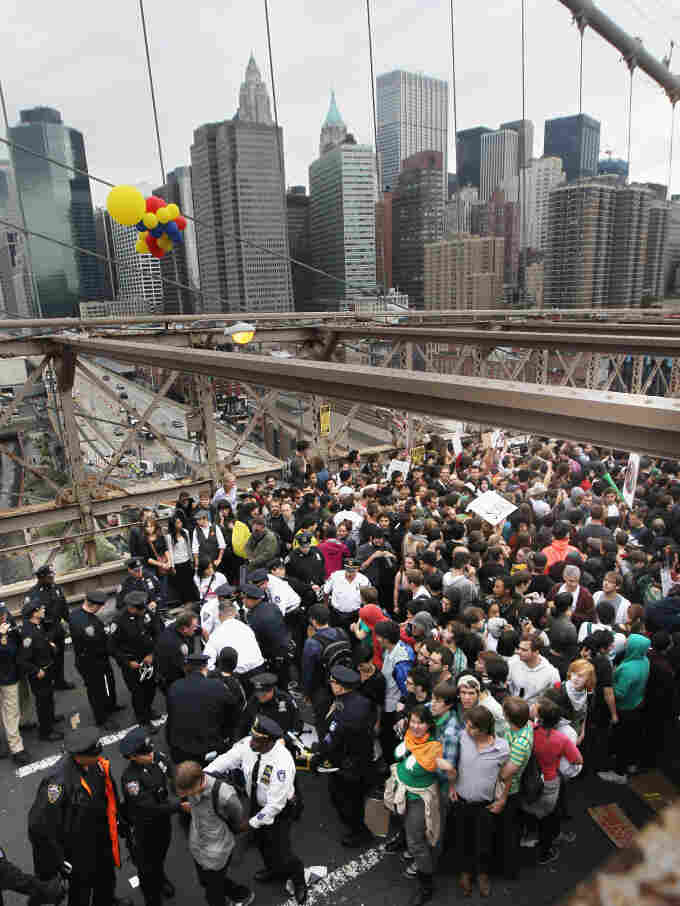 Police arrest two Occupy Wall Street demonstrators after they tried to cross the Brooklyn Bridge on Oct. 1. Media coverage spiked after the incident. 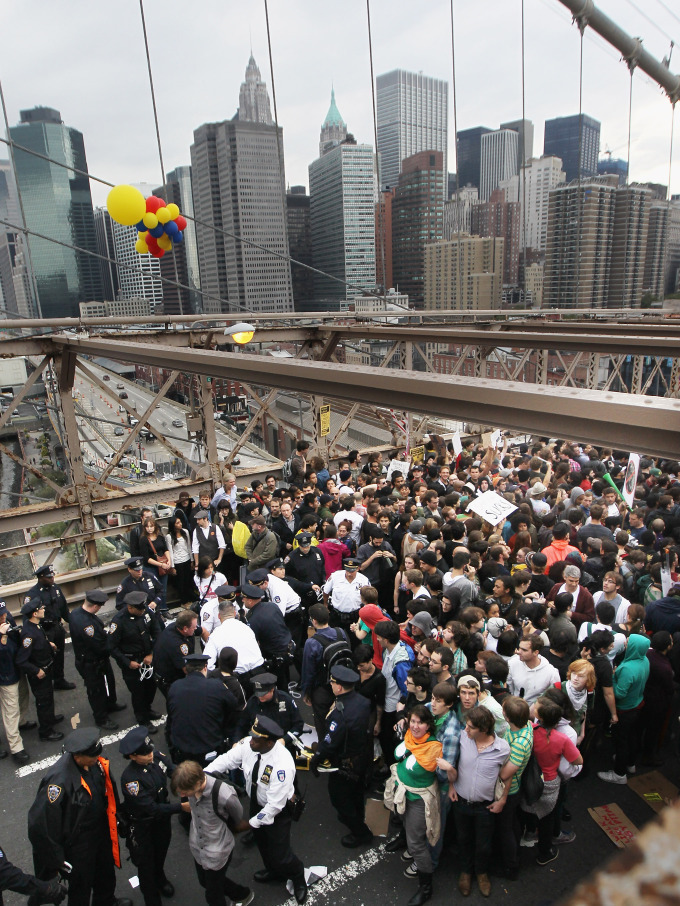 Police arrest two Occupy Wall Street demonstrators after they tried to cross the Brooklyn Bridge on Oct. 1. Media coverage spiked after the incident.

"It's not just a bunch of a dancing hippies protesting; there are all kinds of people there — babies, teachers, cheerleaders ... and that," she said, panning the camera to a freaky zombie guy.

Burnett then questioned whether the protesters even know what they're talking about. She asked one if he knew that taxpayers made money on the Wall Street bailout; the protester said he wasn't aware and would have to do more research.

"They did ... on the Wall Street part of the bailout," Burnett said. "Does that make you feel any differently?"

A Lack Of Familiar Labels

Burnett was slammed as uncaring by liberals and some media critics, who pointed to her previous jobs as a Wall Street analyst and a financial anchor for CNBC.

But it was hard to know precisely what to make of the protests. They started nearly a month ago — with hundreds, not thousands of participants — who cited widely disparate complaints and causes.

The common thread was the idea that powerful politicians have bailed out the banks and wealthy financiers, but left most Americans suffering badly during the economy's collapse.

Even early sympathetic columns in The New York Times and the Boston Globe were largely dismissive. It was covered mostly as a local nuisance in the nation's financial center until Sept. 24, when New York City police forcibly penned in a small knot of protesters.

There, a senior official sprayed several shouting but stationary women in the face with pepper spray. The attack was captured on video and forced the NYPD to backpedal. It drew the media's attention: Coverage spiked after that, and again after police arrested 700 demonstrators for attempting to march across the Brooklyn Bridge.

Activist Jesse LaGreca spoke on Christiane Amanpour's ABC news show This Week about the coverage of Occupy Wall Street and other issues.

"The most important thing we can do in our occupation is to continue to push the narrative that's been ignored by so many pundits and political leaders," LaGreca said on the show. "The reality is, I'm the only working-class person you're going to see on [Sunday] political news — maybe ever. And I think that's very indicative of the failures of our media to report on the news that matters the most to working-class people."

LaGreca's assertion drew some laughter from the other panelists, but the coverage has become more respectful. This week CNBC has been live-blogging activities about the Occupy New York protests, and the financial news channel set up a "speaker's corner" there.

Demonstrator Mark Brown of Rochester, N.Y., spoke at that corner. He raised an issue with defense spending, saying, "According to what I've read, we have [a budget] of about $650 billion per year going out to fund our various wars. Now, how many schools can we build for $650 billion in one year?"

Still, reporters don't always know what to make of the protests. In Atlanta, consensus-driven activists decided not to allow Congressman John Lewis, a hero of the civil rights movement, to address the throng because they did not want to suggest that any one person carried more weight than anyone else.

So reporters are trying to cram this nebulous new phenomenon into a more familiar template. Is it like the civil rights movement? The Tea Party? Something else altogether? And they are stumbling around to figure out how enduring and how consequential it will be.